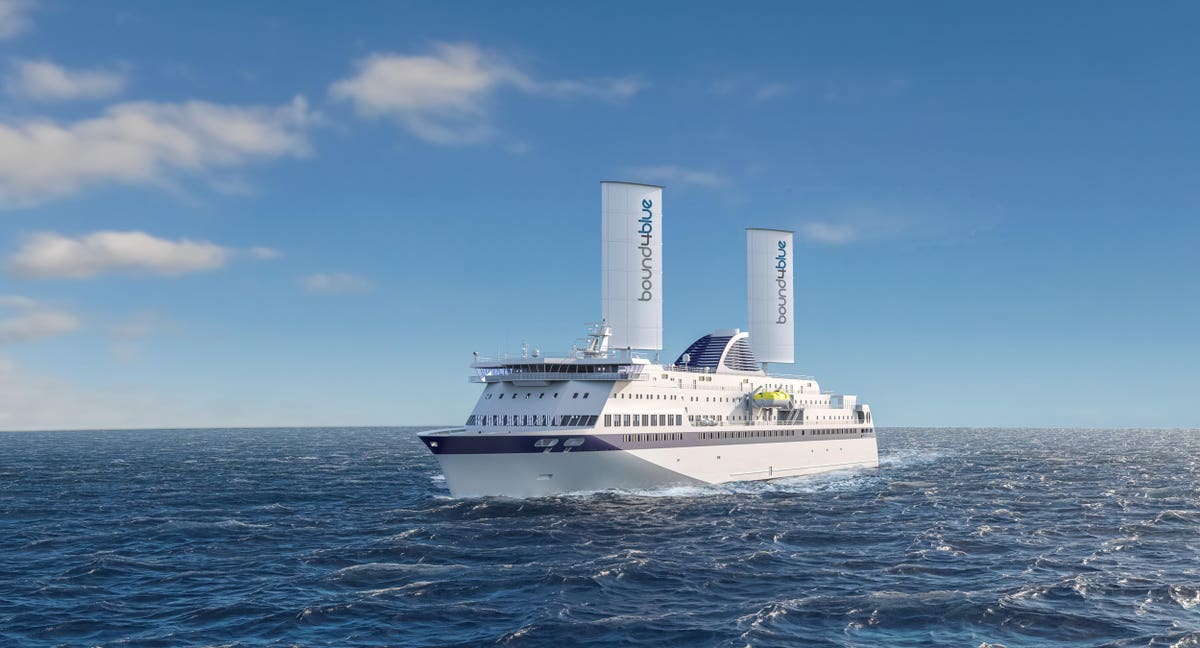 Shipowners and operators may be able to decrease their fuel-related costs and pollutant emissions up to 30%, thanks to a new system created by Bound4blue.

The Spanish company aims at delivering automated wind assisted propulsion systems (also called wingsails) that can be integrated onto a wide range of vessels. The project was founded by Cristina Aleixendri, David Ferrer and José Miguel Bermúdez.

“The three of us are aeronautical engineers, which clearly served as the foundation of the technology developed,” Bermúdez says. “We found soft sails installed in sailing boats or yachts, but none in commercial vessels. We believed we could apply our knowledge in aeronautics to build a high-lift device for the shipping industry adapted to its requirements, that could be the solution to the two showstopper challenges they are facing: high fuel operating expenses and emissions reduction pressure from international entities.”

Before Bound4blue, the co-founders worked on the design, manufacture and launch of scientific capsules to space, the construction of efficient wind towers, and the deployment of Geodetic Quality Sea-Ice drift buoys in the Arctic. They have been featured amongst the 30 brightest industry European entrepreneurs under the age of 30 by Forbes.

Now they are working on a Handysize (600-feet length) vessel that operates in the route Busan (South Korea) – Seattle (USA), possibly saving over 940 tons of fuel per year and so over 2,900 tons of CO2 savings per year.

“Of course we can talk about renewable energy, as the only energy source we are using in the overall process is the wind power, which is directly used to propel the ships with no intermediate energy conversion,” Bermúdez says.

The system has many benefits. It is capable of providing double-digit fuel savings and emissions reduction with a payback below five years, it can be folded, it has extended operability thanks to the rotation capability, and it works with a simple and fully autonomous operation.

“Bound4blue’s innovative technology is a creative application of an already existing one. Wind was once used centuries ago to propel vessels, so it is as simple as going back to the basics, but using 21st century aeronautical technology.”

As maritime transport is a key industry with over 80% of the worldwide cargo, its pollutant emissions are a major environmental challenge. It accounts for 3% of the global CO2 emissions, among others, having a direct impact on our planet in terms of global warming and being responsible for 14 million cases of childhood asthma each year. In fact, maritime transport generates as much CO2 as the 6th more polluting country in the world and the 16 largest vessels in the world generate the same amount of Sulphur emissions as the entire global fleet of cars.

“Our technology reduces the emissions produced in the maritime transport of cargo and people, by decreasing the use of fossil fuel with the same level of energy used by the ship,” Bermúdez adds. “Moreover, our solution also provides huge opportunities to modernize the infrastructure which will create new jobs and promote greater prosperity across the globe.”

The World Maritime Day was celebrated last Thursday, with the theme Sustainable Shipping for a Sustainable Planet. On the occasion, Transport & Environment reminded that “an effective and credible ban on the use and carriage of heavy fuel oil” was to be put in place.

There are big challenges and opportunities for the sector over the coming years and the Carbon Trust is helping its clients set emissions targets in line with the Paris Agreement, as well as understand how current fleets may need to change.

“The Carbon Trust expects wind propulsion devices like wingsails to play an important role in reducing fuel consumption and emissions from both new and existing vessels in the coming decades,” Eric Lounsbury, director of ventures at the Carbon Trust, told Forbes.com.

The actual emission reductions that such technologies can deliver depends on several factors, such as:

It’s an old story. In 2018, the International Maritime Organization agreed to reduce emissions from global shipping by at least 50% from 2008 levels in the next 30 years.

Around the same time, a study published by International Transport Forum pointed out that carbon emissions from international shipping could amount to 1,090 million tons by 2035, a growth of 23% compared to its 2015 level.

However, innovation is there to assist the industry. “A major part of the required reductions could be realised via alternative fuels and renewable energy,” the report reads. “Technological measures are available to increase the energy efficiency of ships and could yield a substantial part of emission reductions. Finally, operational measures could also achieve a considerable share of the required emission reductions.”

Like others, Bound4blue received €500,000 from the European Institute of Innovation and Technology (EIT) Climate KIC, as part of the EIT Crisis Response Initiative. All in all, they have already succeeded in raising over €5.8 million investment from private investors and grants by the Government of Catalonia and the Government of Cantabria, as well as from the European Maritime and Fisheries Fund (EMFF).

“Bound4blue is an example of a start-up that is leading the way in accelerating the green transition,” EIT Climate-KIC commented. “The team demonstrates entrepreneurial ability to push the envelope for systems-change. We’ve been very impressed by how they have already gotten in an industry sometimes considered as slow moving and by the company’s strong climate impact case.”

The wingsail system is currently being implemented in four ships as in the pilot phase: two fishing vessels, a general cargo vessel and a bulk-carrier.

The next step is to implement a worldwide industrial network (shipyards, systems manufacturing and assembly), as well as to grow the team in the business development and commercial departments to expand operations and boost sales in Europe and Asia.

“Wingsails are promising, but are still maturing and have yet to be deployed widely at commercial scale,” Lounsbury adds. “For this reason, some investors may see the technology as higher-risk compared to more widely deployed operational energy efficiency measures. As the technology matures and achieves more commercial validation, the investment risk will come down. The sector can also expect more stringent emissions regulations from the IMO by 2023 and wingsails, alongside other efficiency and fuel technologies, will become increasingly attractive options to meet stricter rules.”