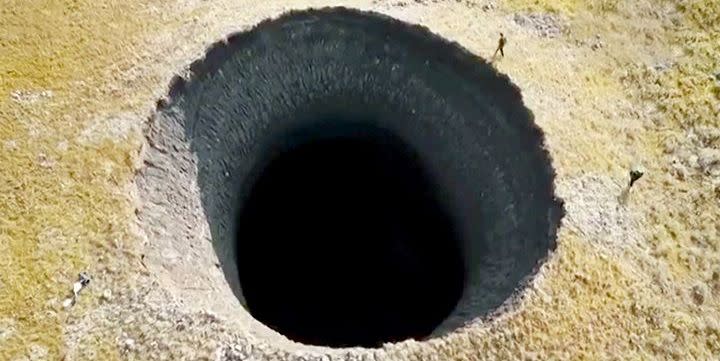 Why This Monstrous Crater Suddenly Appeared in Russia

A 164-foot crater burst open in a desolate region of the Siberian tundra, according to the Russian news agency Vesti Yamal. Journalists from the publication spotted the crater during an assignment on the Yamal Peninsula in July and released their footage this week.

This is the 17th such feature, called a hydrolaccolith, that scientists have found across the thawing Siberian tundra, according to The Siberian Times. Researchers discovered the first one in 2014. They believe pockets of methane gases trapped beneath Earth’s surface bulge and eventually explode as carbon-rich permafrost in the region begins to melt, releasing trapped gases.

➡ You love our badass planet. So do we. Let’s nerd out over it together.

It’s been a hot, hot summer in Siberia. The small town of Verkhoyansk, Russia, which lies north of the Arctic Circle, recorded its highest-ever temperature, 100.4 degrees Fahrenheit, on June 20, according to National Geographic.

Scientists suspect thawing permafrost caused a Siberian diesel storage tank to collapse and dump over 20,000 tons of fuel into local river. As permafrost continues to melt, it could destabilize infrastructure—buildings, roads and, critically, oil pipelines—across the Arctic.

But residents who live along the Arctic tundra aren’t the only ones who should be concerned. Methane’s release into the atmosphere can have global impacts.

The colorless, odorless and highly flammable gas is one of the most potent greenhouse gases emitted into the atmosphere. (Try 30 times stronger than carbon dioxide.) So as more of the gas is released into the atmosphere, its effects could serve to accelerate warming and may even spur a perilous feedback loop.

There’s more work to be done to understand exactly what is happening at blast sites like the one discovered in July by Vesti Yamal‘s journalists. Vasily Bogoyavlensky, a researcher with the Russian Oil and Gas Research Institute in Moscow, told Vesti Yamal his team plans to investigate the structure and submit its findings to an academic journal.