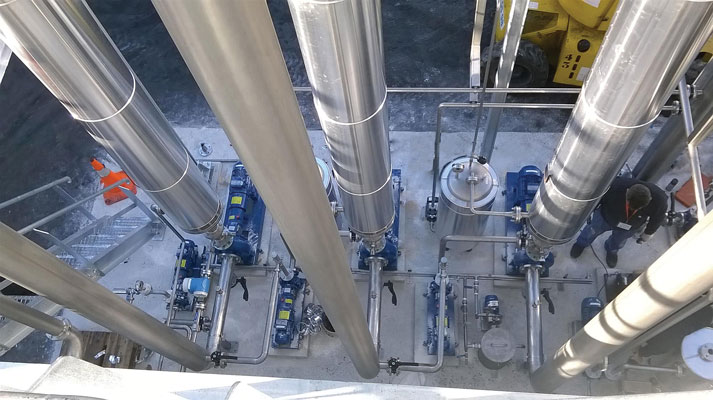 There has long been a recognition among waste professionals that waste should be seen and treated as a potential resource. Indeed, the development of a truly sustainable circular economy depends on it. With developments such as ZLD, the technology is now available to make such
societal changes a reality.
By Matt Hale

The term ‘disruptive technology’ can be found everywhere across the waste and wastewater treatment sectors, from conferences to whitepapers, from small industrial sites to large municipal wastewater treatment plants. There is no doubt that disruptive technologies have the power to transform sustainability in the waste sector, but it is important to realize that a technology does not need to be new in order to be disruptive. The widespread use of previously niche systems, or the novel use of well-established technologies like heat exchangers, can be equally transformative.

What is Meant by Disruptive?
A disruptive innovation is typically described as one which creates a new market or value network, leading to the displacement of market-leading businesses and products. High profile examples from everyday life include the Internet, mobile phones, Amazon and television streaming services. However, it is also evident that while the terms disruptive innovation and disruptive technology may be new, the fundamental idea is not. From the Iron Age overtaking the Bronze Age, to the invention of gunpowder, the steam engine and the internal combustion engine, human history is littered with examples of transformational developments which have changed the course of global civilization.

Part of a Wider Agenda
The current high level of disruptive technological development and implementation is itself part of a wider industrial development, which is often referred to as Industry 4.0. This fourth industrial revolution refers to the increased use of technology, automation and data across industries as diverse as agriculture and healthcare; waste treatment and the environmental sector are no different. While some people dismiss Industry 4.0 as a marketing buzzword, there is no denying the effects that digitization, data capture and analysis, and automation are having across the economy.

Examples of Disruptive Technology
There have been plenty of disruptive developments in the treatment of wastewater streams and associated solid wastes through history, from sewer systems and trickling filters, to the use of activated sludge, anaerobic digestion and nutrient recovery. Some of the current areas which have the most potential for disruption, either because they are new, or because they are becoming increasingly common, include:
• Decentralized wastewater treatment—The development of smaller, decentralized treatment technology has the potential to improve levels of sanitation and access to clean water around the world. A number of universities and companies are working on practical solutions for sustainable, small scale wastewater treatment units. This includes anaerobic digestion plants and developing local uses for solid residues such as digestate.
• Phosphorus recovery—Economic, political and environmental factors are already combining to make the recovery of this valuable nutrient from solid waste streams and sludges routine at commercial wastewater treatment facilities. Consultants are also turning their attention to phosphorus recovery at smaller scale installations, such as septic tanks and agricultural waste treatment.
• Wastewater and sludge mining—While the recovery of some key nutrients, such as phosphorus, is now common, an improved understanding of the scarcity of resources and moves towards the development of a true circular economy means that the next generation of wastewater treatment plants is likely to include physical, chemical and biological systems to recover key materials (including carbon, nutrients and rare metals) for reuse in processes as diverse as farming, food production and industrial manufacturing.

• Zero Liquid Discharge—Commonly abbreviated to ZLD, this technique refers to waste treatment techniques that remove the liquid streams, usually employing a combination of processes such as filtration and crystallization to remove suspended and dissolved materials to leave a number of solid residues, which often contain valuable co-products or components such as those described above and water. Now categorized as a mature technology, it is an example of a disruptive technology that is rapidly becoming mainstream.

Using Existing Technology for Disruptive Purposes
There are many drivers for the adoption of all or some of these techniques in wastewater treatment, including environmental, economic and social factors. However, the good news for companies wanting to evaluate and introduce such technology is that the techniques already exist.

For example, many of the processes described involve some form of evaporation to concentrate residues for extraction and as part of the purification of wastewater streams. Heat transfer and evaporation specialists already produce a range of heat exchangers and systems, which are suitable for any or all the above processes. A series of scraped surface heat exchangers are particularly suitable for use in evaporation systems, such as those used for ZLD and material recovery.

Moving towards zero liquid discharge further blurs the boundaries between liquid and solid waste management, effectively turning liquid waste streams into a series of solid and semi-solid resources. As such, it has the potential to increase the demand for additional technologies, which are able to extract the potential resources contained in the sludges and evaporates generated in ZLD systems. When coupled with other technologies, such as the pasteurization of sludge and digestate, it ultimately results in solid products that can be handled and used without the disadvantages of large volume liquid-based systems.

Certain evaporators used in ZLD systems are run at lower pressures to reduce the boiling point of the liquid, enabling multi-effect evaporation. In multi-effect evaporation, steam from a previous evaporation stage is used as the thermal energy for the next stage, which works at a lower boiling point. In this way, multiple evaporation stages are combined, delivering considerable energy savings. For many components, crystal precipitation is also favored at lower temperatures; so, lowering the evaporation temperature helps to boost product recovery rates.

Both the evaporation and cooling steps result in a high degree of material fouling on the inside of the equipment. To combat this, scraped-surface evaporators are used, as they maintain thermal efficiency and remove fouling as it occurs in the evaporation process. In addition, scraped-surface heat exchangers are also used for cooling the crystal-loaded slurry that is obtained in the crystallization tanks.
There has long been a recognition among waste professionals that waste should be seen and treated as a potential resource. Indeed, the development of a truly sustainable circular economy depends on it. With developments such as ZLD, the technology is now available to make such societal changes a reality. | WA

Matt Hale is International Sales and Marketing Director at HRS Heat Exchangers (Atlanta, GA), part of the HRS Group which operates at the forefront of thermal technology, offering innovative heat transfer solutions worldwide across a diverse range of industries. With approaching 40 years of experience in the wastewater sector, specializing in the design and manufacture of an extensive range of turnkey systems and components, incorporating their corrugated tubular and scraped surface heat exchanger technology, HRS units are compliant with global design and industry standards. HRS has a network of offices throughout the world: Australia, New Zealand, UK, Spain, USA, Malaysia and India with manufacturing plants in the UK, India and Spain. For more information, call (770) 726 3540 or e-mail [email protected]