Upward Momentum Ahead of ZEW

For five trading sessions in a row, the EUR/USD pair was moving in an upward correctional range.

In the beginning of this week’s trading, it moved towards the 1.1888 resistance before settling around 1.1866 in the beginning of Tuesday’s trading, ahead of the German ZEW reading. The single European currency returned to gains with Christine Lagarde not interested in the recent strength of the Euro. Commenting on the performance, MUFG analyst Derek Halpenny says, “The Euro has failed to hold on to initial gains after the ECB press conference – we think for a good reason. President Lagarde may have disappointed with her comments on foreign exchange, but it should be obvious the fact that the European Central Bank is increasingly concerned and that continued Euro gains could trigger a monetary move in the future.”

At the end of last week, the Chief Economist of the European Central Bank, Lynn, said that the bank would carefully evaluate the information received from the economy “including developments related to the exchange rate” because “the recent rise in the Euro exchange rate weakens inflation expectations.” As a result, “the volume of the upward revision has eased.” Core inflation is largely due to the appreciation of the Euro”.

On the other hand, Goldman Sachs analysts see that Bank Governor Lagarde indicated that a stronger currency would affect inflation expectations, but she did not try to pull back on the Euro. Lynn’s sentiments were at odds with those expressed by Bank Governor Christine Lagarde in the September ECB policy update the day before, and his role in the bank is now believed to be increasingly important because the new bank’s leader is neither an economist nor a financial practitioner. Christine Lagarde, the former head of the International Monetary Fund, is a lawyer and very similar to Federal Reserve Chairman Jerome Powell.

SEE FOR YOURSELF WHY EUR/USD IS THE MOST TRADED PAIR

Analysts believe that the Euro should follow developments affecting the dollar index in the coming months with the approaching date of the US elections, and that any victory for the opposition candidate, Joe Biden, could increase pressure on the US currency and thus there will be an opportunity for the EUR/USD pair to rise to the 1.25 level by the end of the year if accompanied by an early approval of a vaccine to counter the Coronavirus.

On the US side: With the impossibility of negotiating a new financial support package, US President Trump took $44 billion in disaster relief funds and switched them to unemployment compensation ($300 per week). The funds have been exhausted, but the Federal Emergency Management Agency maintains that there is money for states that are still drawing up their programs for six weeks as late as August 1. Five states have already started paying. Two million New Yorkers will start receiving payments this week.

On the other hand, cautious optimism about the Covid-19 vaccine is increasing again. AstraZeneca/Oxford is due to resume vaccine tests in the UK and Japan this week. For his part, the CEO of Pfizer said that the US will likely start rolling out a vaccine before the end of the year.

According to the technical analysis of the pair: There is no change in my technical view of the EUR/USD performance as stability above the 1.1900 resistance is an important element for bulls to push the pair to stronger bullish levels. The 1.2010 psychological resistance will remain present in the hearts of investors, and the pair may surpass it if the US currency is abandoned as a safe haven. Until now, the European Central Bank has ignored the strength of the Euro, supporting gains in the face of any possible weakness of European economic data results. On the downside, the 1.1752 support will remain important for the continuation of the trend reversal that occurred last week.

As for the economic calendar data today: Regarding the Euro, the French consumer price index and the German ZEW index reading will be announced. For the U.S dollar, the industrial production rate and the Empire State Industry Index will be announced. 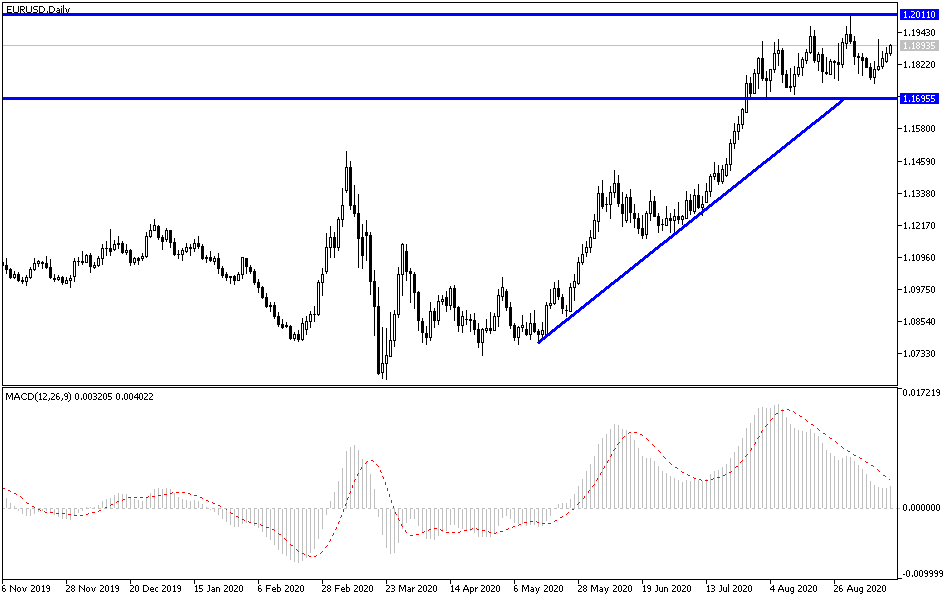