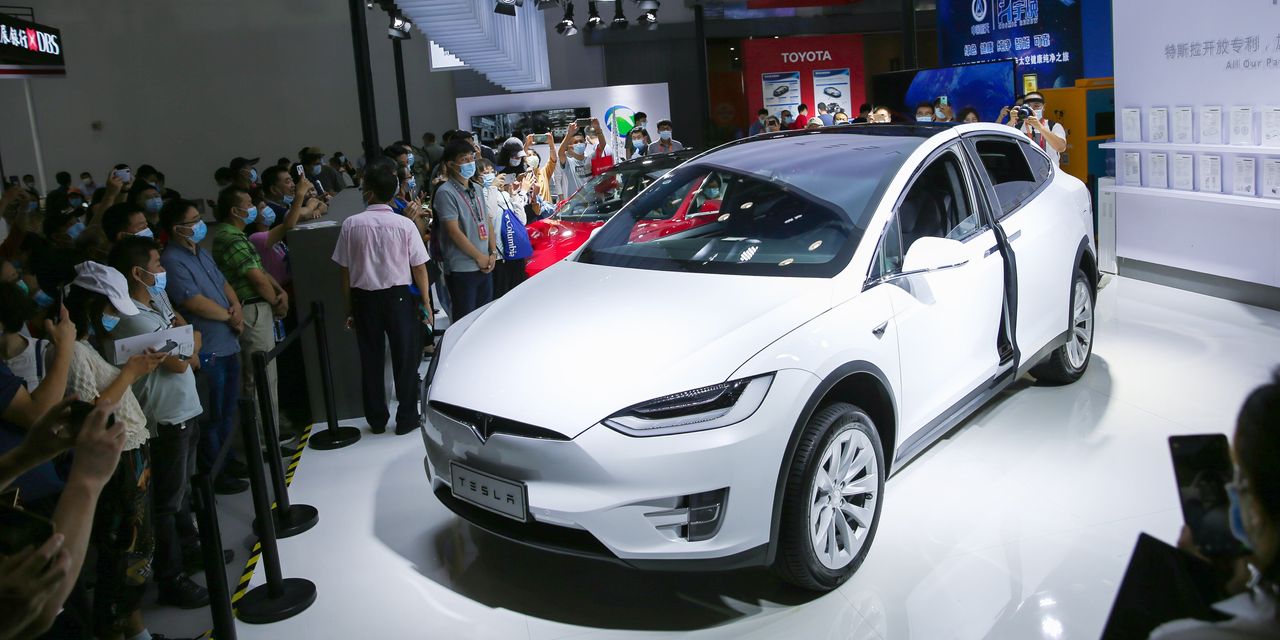 Futures tied to the S&P 500 fell 0.2%, suggesting that U.S. stocks will slip after the opening bell. Tech-heavy Nasdaq Composite Index futures fell 1.3% after a bout of volatility last week led to big drops in the index.

In premarket trading, shares in electric-car maker Tesla fell nearly 10%. Index provider S&P Global said late Friday that it wouldn’t include Tesla in the S&P 500, which is tracked by billions of dollars in investments.

Tesla “shares have run higher, hitting a peak of $502 last week, in anticipation of inclusion into the prestigious U.S. benchmark,” said Michael Hewson, a chief markets strategist at brokerage

“Friday’s decision not to include the company in the index could see further losses.”

rose 5% premarket. The S&P 500 index provider said it would add the stock to its constituents on Friday.

Also weighing on markets Tuesday are an uptick in economic tensions between the U.S. and China.

President Trump said in a Monday press conference that he was considering “decoupling” from China and wasn’t seeking to bring outsourced jobs back to the U.S. The comments are the latest twist in a multiyear spat between the two largest economies in the world that have centered around technology, security and jobs.

“Decoupling is an economic concept not a political concept,” said Sebastien Galy, a macro strategist at Nordea Asset Management. “These have the potential to be very significant moves.”

Chinese Foreign Minister Wang Yi announced an initiative on Tuesday seeking to set global standards on data security, in response to accusations by Washington over what the Trump administration deems to be national-security threats by Chinese companies such as Huawei Technologies and Tencent Holdings.

In Asia, major benchmarks rose, with the Shanghai Composite Index and Korea’s Kospi index both closing up 0.7%. Japan’s Nikkei 225 ticked up 0.8% after the government released its revised gross domestic product figures for the second quarter, which were moderately better than economists’ expectations.

shares stabilized Tuesday, falling 0.6%, after a 7% fall on Monday. The Japanese conglomerate unsettled investors by making an outsize bet on giant tech stocks in options markets.

The pan-continental Stoxx Europe 600 slipped 0.9% as another round of Brexit trade negotiations between the U.K. and the European Union are set to begin on Tuesday. Prime Minister Boris Johnson has set an Oct. 15 deadline to strike a deal and tensions are expected to simmer in the final weeks ahead of the deadline. The pound weakened 0.2% against the euro.

“Sterling is definitely under short-term pressure,” said Russell Silberston, investment strategist at Ninety One. “If the range of possible outcomes suggests we are going to move towards a hard Brexit, I wouldn’t be surprised to see the euro rally and the sterling fall.”

The German benchmark DAX index was 0.6% lower. German exports for July rose 4.7%, indicating that the trade-dependent country’s economy is recovering, albeit a little more slowly than anticipated. Economists were predicting a 5% increase.

“German exports continue to play catch up with the rest of the economy,” said Carsten Brzeski, chief economist for the eurozone at ING. But “the German export sector is still suffering from structural challenges including trade tensions, Brexit and global supply chain disruptions as well as difficulties among its main trading partners to cope with the virus.”

Oil prices extended their drop after Saudi Arabia signaled an expectation for reduced demand over the weekend by cutting prices. The global benchmark, Brent crude, slipped 1.5% and traded at $41.40 a barrel. The U.S. WTI retreated 3.5%.

The yield on benchmark 10-year Treasury notes fell to 0.710% from 0.720% on Friday. The U.S. Treasury Department will issue debt with maturities ranging from three months to three years in a series of auctions on Tuesday.

Investors will also be awaiting earnings releases from

the business chat-software developer, which will report after the market closes along with athleisure brand