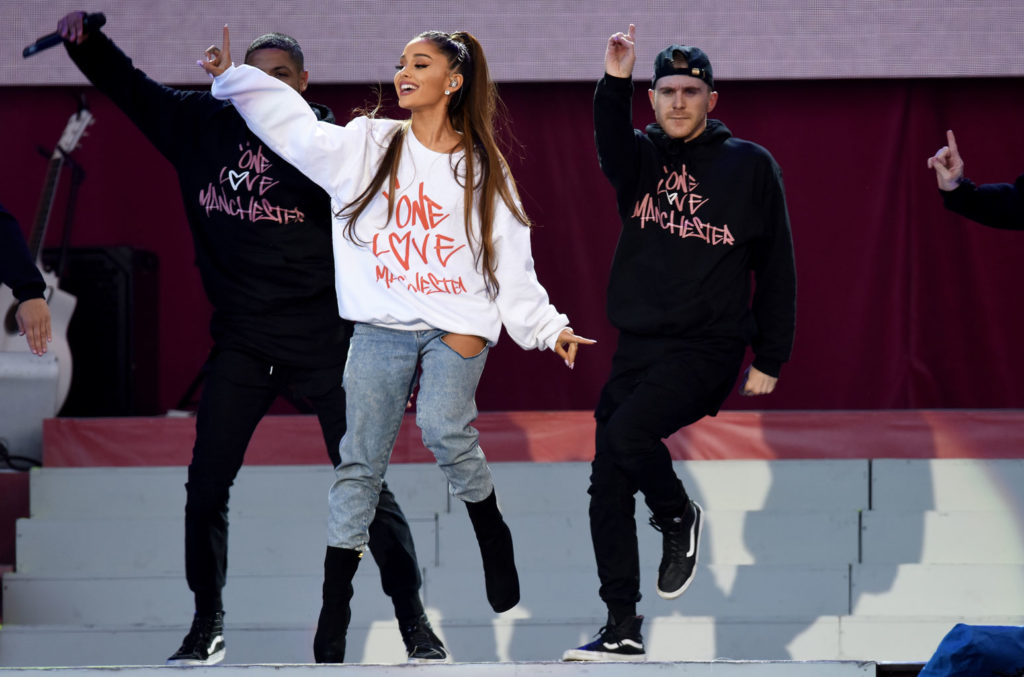 Stopping the e-commerce sales of knockoff T-shirts and other memorabilia on Amazon, eBay and other major platforms is a game of whack-a-mole, but CounterFind, which was co-founded by former Dallas Cowboys safety Darren Woodson, has become an effective hammer for the music industry

When a suicide bomber killed 22 people and injured hundreds following an Ariana Grande concert at the Manchester Arena in England in May 2017, the singer and her agent wasted no time in setting up a June 4 One Love Manchester benefit concert — with a lineup that included Katy Perry, Justin Bieber, Coldplay and Miley Cyrus — to aid the victims and their families. And counterfeiters wasted no time in knocking off the merch that was sold as part of the fundraiser.

Bootlegged T-shirts, hats, stickers and other products bearing Grande’s trademarked “One Love” logo were offered for sale online, prompting the merchandise company manufacturing the authentic goods, Universal Music Group-owned Bravado, to scramble for a way to shut down the knockoffs.

In the fall of 2017, the company — the largest of UMG’s “merchandising and other” operations that collectively earned revenue of over $547 million in 2019, up 79.4% from the previous year — took a chance on a brand-new Dallas-based tech startup, CounterFind, that tracks and takes down counterfeit merch sold on e-commerce and social media sites, including such established brands as Amazon, eBay, Alibaba Group’s AliExpress, Facebook, Instagram and Twitter.

Since then, the counterfeiting of music merchandise has mushroomed — “flagrant” is the descriptive used by Bravado CEO Mat Vlasic — and CounterFind has emerged as the music merch industry’s high-tech weapon against online counterfeit at a time when e-commerce sales of artist-branded T-shirts, hoodies and other goods have become an ever more important financial lifeline thanks to the pandemic-induced shutdown of touring.

“It’s an expense to [our] company and an expense to the artist,” says Matt Young, president of Warner Music Group’s Artists Services, the merchandise and license unit.

Just over 3 years old, CounterFind’s network of engineers leverages proprietary software and AI to scan all major e-commerce and social media sites, identify unlicensed merch and issue takedown notices to those that advertise and sell it. In addition to Bravado, the company works with large and small outfits — including WMG and Three Ten Merchandising (which counts Beyoncé and Linkin Park as clients) — as well as those outside of the music industry. (Ohio State University was its first client.)

By 2022, the estimated value of counterfeit goods, including the illegal online distribution of copyrighted music, movies and software, is expected to approach $2.8 trillion, according to the International Trademark Association. Although the organization does not break out estimates for music merchandise, Vlasic estimates Bravado took down as much as $10 million in online counterfeit goods in 2019 with CounterFind’s help.

From Aug. 1, 2019, through July 31, 2020, over 220,000 takedown notices were issued for counterfeit products, a 250% increase over the previous year, according to data that CounterFind aggregated from five music merch clients that also included another UMG-owned company, Epic Rights; WMG; and Three Ten. That number represents just a portion of its efforts for music industry clients. (Nondisclosure agreements prevent it from releasing some data.)
“We’ve seen so much technical advancement in online counterfeiting,” says Aronson. “[Bootleggers] don’t have to sit outside stadiums and concert venues anymore. They are going online and taking advantage of targeted marketing to reach consumers directly.”

With music acts unable to sell their apparel and memorabilia at concert venue kiosks, sales are down sharply for record labels, though many artists who are selling their own merch directly to fans through e-commerce sites are seeing a sales boom. UMG reported that merchandising and other sales — a category that includes direct-to-fan marketing and e-commerce company Fame House and film/TV division PolyGram Entertainment as well as Bravado and Epic Rights — fell 61.8% in the second quarter of 2020 compared with the same quarter of the previous year. Revenue for WMG’s artists services operations, which includes merchandising, fell 21% for the same period.

In response to the pandemic, these and other merch companies have amped up their e-commerce efforts to recoup some of that lost income — and so have counterfeiters. “Now that there is a bigger shift to e-commerce, the people who sell counterfeit [goods] for a living are having a field day,” says Aronson. “The number has exploded.”

When CounterFind begins working with a client, it undertakes a baseline scan of potential knockoff products that are for sale online. Aronson says that for well-known artists, an initial scan today flags 5,000 credible trademark violations on average, compared with 2,000 a year ago.

The company’s founders began to develop CounterFind’s underlying technology in 2016 after working at an online marketer where Woodson — who retired from the Cowboys in 2004 and was inducted into the NFL team’s coveted Ring of Honor in 2015 — was an investor. The company was selling licensed merchandise (including Cowboys-branded items) through targeted advertising on Facebook and Instagram. It was there that Woodson, Aronson and the others saw how bootleggers were cutting into their business by using social media advertising to market counterfeit merch online.

In an interview, Woodson says his personal experience also played into his passion for helping to create CounterFind. “I’ve personally witnessed other athletes whose merchandise has been counterfeited, artists who have been hijacked on social media platforms,” says Woodson, who describes his co-founders as a tight-knit group that have built the firm together. Clients know “we understand the pain.”

Aronson says the counterfeiters were taking advantage of emerging print-on-demand technology, which allowed them to manufacture knockoffs based on actual orders instead of gambling on large amounts of inventory that might not sell.

CounterFind uploads every trademark owned by an artist and employs proprietary filtering software to weed out unlicensed products using keywords and image identification. The technology also uses geolocation to distinguish professional counterfeiters from enthusiastic fans. Music merch purveyors say they are careful not to shut down fan-created stickers and T-shirts. “This is mostly focused on the repeat egregious offenders,” says Aronson.

Once potential violators are identified, an act’s representative makes the final call as to whether counterfeiting is involved. If the answer is yes, CounterFind or legal counsel for the act files a notice demanding that the site stop selling or advertising the merch. For these services, CounterFind charges clients a monthly subscription fee based on the scope of the brand and the online sites being tracked.

The challenge is shutting down counterfeiters permanently. Online sellers need only an email address and a credit card, for the most part, to set up shop on e-commerce sites and can advertise cheaply on social media, making it easy for them to reopen under a new name.

“It’s still whack-a-mole, but now you are using a powerful technology to help you,” says Jeff Delson, founder of Three Ten Merchandising, which is an investor in CounterFind. “You don’t have to manually find these illegal products and can much more effectively protect your clients and their brands.”
The global market for music merch has grown consistently in recent years, as branded artist wares have become a fashion statement, thanks to artists such as Kanye West, Katy Perry and Billie Eilish. In 2019, music merchandise grew to $3.66 billion, up 5% from $3.48 billion in 2018, according to Licensing International, which conducts an annual survey of the market.

At the same time, counterfeiters have gotten more sophisticated and more prolific. According to a 2019 report by the Organization of Economic Cooperation and Development, the international market for counterfeit and pirated goods was as much as $509 billion in 2016. And in January, the U.S. Department of Homeland Security said the trafficking of counterfeit and pirated goods from luxury brands like Rolex and Gucci to pharmaceuticals and electronics “has intensified to staggering levels. The 54-page OECD report also suggested that online marketplaces like Amazon needed to take more responsibility to combat this onslaught.

Music industry executives, analysts and lawyers interviewed concurred and attributed the explosion of counterfeit music merch to the confluence of print-on-demand technology and Amazon’s courting of third-party sellers, both of which, they say, happened approximately five years ago.
An Amazon spokeswoman dismisses any suggestion that the company helped fuel online counterfeiting, saying, “Counterfeiting has been an issue well before Amazon even existed.”

Aronson and music merchandising executives also claim that the Australian e-commerce marketplace RedBubble is another hotspot for counterfeit goods. A cross between Amazon and Etsy, the site, which is owned by Melbourne-based RB Group, hosts third-party sellers hawking goods that range from clothing and coffee cups to pillows, masks — and music merch, much of which is counterfeit, according to these sources.

Although RedBubble has yet to be sued by a music act or its merchandise partner for trademark infringement, the company has faced litigation on that front. Last year, a federal court in Australia found RedBubble had infringed on the trademark of the Hells Angels Motorcycle Corp., while a federal judge in Ohio rejected Ohio State University’s trademark infringement claims against the company.

Corina Davis, chief legal officer for RB Group, says RedBubble is working with brands to detect and eject counterfeiters. “We don’t want to see fraudulent designs on our marketplace any more than the rights holders and artists do,” she says, adding that the marketplace is also working to secure licensing agreements with musicians. The company currently has deals with a handful of acts, including KISS and Panic! at the Disco.

In early March, Congress introduced legislation looking to hold online marketplaces responsible for allowing the sale of counterfeit products that have a “health or safety impact.” The bipartisan bill, called the Shop Safe Act, calls for an e-commerce platform to “require sellers to verify and attest that its goods are not counterfeit,” among other “best practices.” That initiative has since been put on hold in the wake of the pandemic and the resulting economic freefall.

Pre-coronavirus, the RIAA was set to launch an investigation into the market for knockoff concert merch, but since March the organization has focused its efforts on counterfeit face masks that are branded with artist and band logos while continuing to enforce against counterfeit vinyl records, CDs and box sets that are offered for sale by third-party sellers on Amazon, eBay and Etsy, among other sites.

The U.S. courts have mostly given a pass to online marketplaces selling counterfeit merchandise, but that could change. As an increasing number of brands pursue litigation against violations of their trademarks, Amazon and eBay have acknowledged in filings with the U.S. Securities and Exchange Commission that sales of counterfeit goods may be a liability. Representatives for Amazon, eBay, Facebook and Instagram all point to tough policies against online counterfeiters. Spokespeople for Amazon and eBay say, for example, that the platforms have each invested millions of dollars in efforts to fight the sale of knockoff goods online. An Amazon spokeswoman also cites the formation of a new crime unit, announced in June, that will pursue counterfeit sellers through criminal and civil actions.

So far, those efforts have had a limited impact. On a single day in August, says Aronson, CounterFind identified 4,200 counterfeit products for sale on Amazon that featured musicians’ trademarked images on socks, T-shirts, hoodies and protective masks.