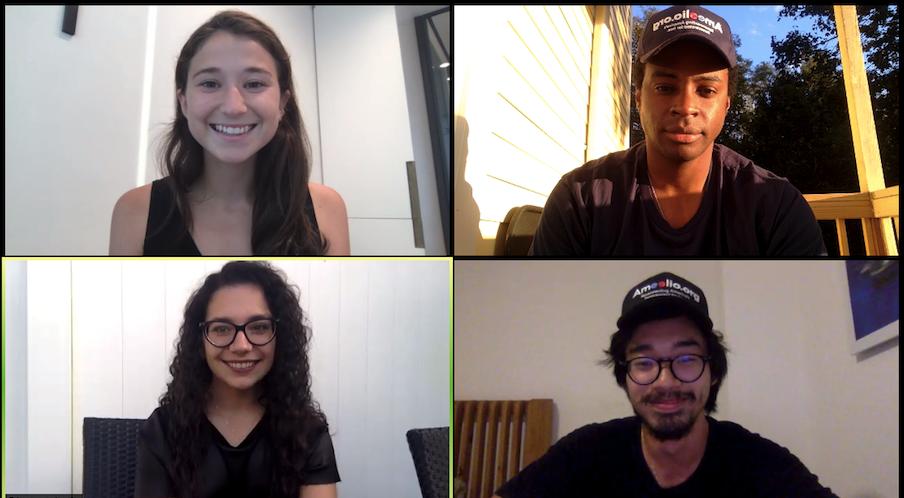 In March, two current students from Yale—Uzoma Orchingwa and Gabe Saruhashi—started a new nonprofit called Ameelio, which is working in order to connect prison inmates with their loved ones for free. Equipped with the understanding that inmates who keep in touch with their families and friends do better after release, the two founders are using new tech—an app that makes delivering letters easier and free for families, as well as a videoconferencing tool—to change how inmates communicate with their loved ones. They’ve already attracted donations from two Silicon Valley billionaires.

The existing system for communicating with inmates is expensive for friends and family of incarcerated people. The for-profit $1.2-billion-a-year prison phone industry can charge more than $1 a minute. “There’s a lot of money being made on low-income people,” says Orchingwa, whose motivation to start Ameelio partly comes from personal experience: He has close friends who are currently incarcerated. Sarushashi, meanwhile, was a software engineering intern at Facebook in the summer of 2017 and turned down a return offer from the social networking company after deciding he wanted to work for a company that facilitated “more meaningful communication.”

For now, Ameelio’s main product is a mobile app that allows users to type their letters, which get sent to Ameelio. The nonprofit prints and mails the letters at no charge. To date, Ameelio has sent 50,000 letters from more than 10,000 families to 11,000 inmates.

But the founders’ long-term vision is to build out a video chat tool that will be free of charge for inmates and their loved ones. The team is currently in talks with one state that it cannot name to pilot the software in prisons where the required infrastructure—an Internet connection and tablets—is already in place.

One in three families fall into debt to pay for inmate calls and visits, according to a report conducted by the Ella Baker Center for Human Rights, Forward Together and Research Action Design. A study from the Prison Policy Initiative estimated 63% of inmates in state prisons located more than 100 miles away from their families. Meanwhile, for-profit companies—which are the norm in state and federal prisons—charge up to 50 cents per email message or up to $25 for a ten-minute phone call. “Although 50 cents doesn’t seem that much for us, when 68% of people impacted by incarceration are low-income families who can’t afford basic needs, that adds up,” says Orchingwa.

The high cost of communicating with inmates is a well-recognized issue: Former commissioner of the Federal Communications Commission Mignon Clyburn, who has been focused on unfair practices in prison calling systems, has called the for-profit prison phone industry the “most glaring type of market failure I’ve ever seen as regulator.”

The Ameelio team hopes to attract donors who recognize that the criminal justice system affects people of color and low-income families the most. “There’s an overwhelming amount of evidence that shows just how predatory these [communications] companies can be,” says Elizabeth Levin, head of policy at Ameelio and a recent graduate of Yale Law School. “A lot of investors are getting wary of supporting an industry that profits off of a vulnerable population, so we want to completely divorce ourselves from that and focus solely on delivering a great product.”

Prison inmates who stay in touch with their family and friends do better after release and are less likely to commit another criminal offense, research shows. But there are many barriers, from the physical to the financial, that prevent families from visiting and speaking with their incarcerated loved ones. The Covid-19 pandemic has also exacerbated the issue as prisons and jails pause in-person visitations.

The Ameelio team was connected to Dorsey’s #startsmall by DeRay Mckesson, a civil rights activist who hosts the podcast, Pod Save the People. “He had a lot of experience using [Ameelio] and he really understood the issue,” says Orchingwa. Mckesson knew that Dorsey was looking for social justice organizations to give to, so he sent an introductory email between the two parties.

The gift from Schmidt Futures, meanwhile, came after Orchingwa sent a cold e-mail to the organization. Soon, the Ameelio team was in touch with Martha Gimbel, an economist at Schmidt Futures. “They already understood the issue pretty well, so we sent them a proposal. It was a lot shorter [turnaround time than] than normal foundations,” Orchingwa said.

With the funds the Ameelio team hopes to hire engineering talent to scale up and finish building its videoconferencing product. Of the four Ameelio team members who spoke with Forbes—cofounders Orchingwa and Saruhashi, Levin and head of partnerships Emma Gray—all of them are foregoing pay and will continue to do so, despite the advice from Ameelio’s sponsors. “Our foundational backers are pushing us to pay ourselves,” says Orchingwa. (They are all currently still in school, with the exception of Levin, who graduated from Yale Law and is waiting to take the Covid-postponed bar exam.).

Having launched during the pandemic, Ameelio has proven itself helpful to some of the  inmates’ family members. “One of our users used to call her husband four times a day, but when the pandemic hit, she lost her job and couldn’t afford it anymore,” says Gray. Ameelio became the only way that she could keep in touch with her husband, by sending him letters frequently. “Unfortunately, the pandemic has not only increased the need for Ameelio, but it has also highlighted how important it is to have a nonprofit like this.”