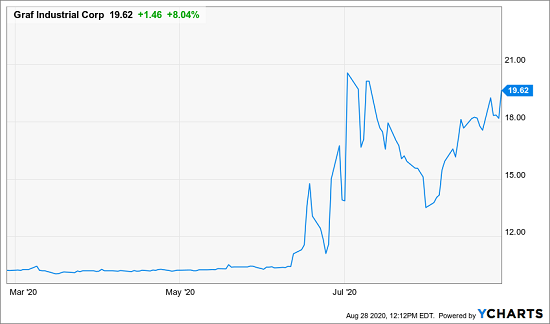 The market has been going crazy for SPACs.

In short, they’re shell companies, sometimes called “blank check companies.” They also happen to be one of the biggest investment stories of 2020.

In Matt’s recent update to subscribers, he walks through the buzz behind SPACs, and what you need to know if you’re considering investing in one.

He also highlights one sector that’s especially prone to big gains from SPACs, even naming a specific investment opportunity he likes right now.

As Matt notes below:

If you’re investing in SPACs, consider yourself at the forefront of the new IPO process.

Have a wonderful Labor Day weekend,

The idea sounds a little crazy when you think about it, but it’s perhaps the hottest investment of 2020.

Say I tell you to give money to someone, tell them to pool it with money from a bunch of other investors … and then find a good company to buy. You might wonder what’s gotten into me.

And yet, that’s exactly what Special Purpose Acquisitions Corporations are. They’re called SPACs for short … and they’re also referred to as “blank check companies.”

Two things you must know about SPACS …

First, they are the new and improved way for companies to go public.

And second, they are one of the hottest investments this year.

Here’s why SPACs are the big thing right now, and I’ll even give you one to consider …

In this year of low interest rates and market volatility, the traditional way for companies to go public is even riskier than usual. It’s incredibly expensive, involves all kinds of paperwork and hype sessions, and can all be undone in an instant by market instability.

Think of companies that planned to go public in February and March when stocks plunged into a bear market faster than any other time in history.

SPACs are a cheaper, better, and less risky way to go public.

They are formed when the blank check company files for an initial public offering intending to use the money raised to buy or merge with an existing private company. The SPAC typically has two years to complete an acquisition or return the money. When a deal is completed, the private company is folded into the SPAC, which is already public. And presto … you have an IPO.

We’re not even two-thirds of the way into the year, and SPACs have already raised more than 2X all of 2019 — $30 billion versus $13 billion last year.

If you’re interested in a SPAC, make sure you’re investing with smart people. Big-name investors are increasingly turning to these popular investments, like hedge fund billionaire Bill Ackman. I’ve been critical of him in the past, but he recently filed to raise $4 billion in what would be the largest SPAC ever.

On Monday, Executive Network Partnering will begin trading on the New York Stock Exchange. Former House Speaker Paul Ryan is the SPAC’s chairman, and the company plans to bring in about $300 million to acquire another company. No specific industry is specified.

That brings me to the next point. Ideally, you want a SPAC pursuing companies with hypergrowth potential. The good news is that a number of them are focused on the same hypergrowth trends that I am.

One particularly popular area is the massive disruption coming as we move toward Transportation 2.0, which will include both electric vehicles (EVs) and autonomous vehicles (AVs).

The company provides LiDAR technology to over 50 auto manufacturers around the world.

The merger is expected to close here in the third quarter. The combined company will retain the Velodyne Lidar name and trade under the symbol VLDR.

We are in the infancy of AV deployment. Major automakers globally are developing self-driving cars and trucks. Given that it is in the pole position, Velodyne’s LiDAR technology has the makings of a big winner.

Disruption is one of my major themes for the Roaring 2020s. Trillions of dollars slosh around in major disruptions like Transportation 2.0 … and now SPACs. If you’re investing in SPACs, consider yourself at the forefront of the new IPO process. Look for more from me soon.