The U.S. has a history of killing companies critical to its future. With the original Standard Oil, that company had gained too much political power, but in breaking up the company the U.S. government gave control of the oil market to the Middle East. RCA had too much power, and when the U.S. broke up the company, it gave that consumer market to post-war Japan.

In both cases, those firms were massive; arguably the most powerful in their space at their time — and while corrective action was needed, the U.S. did itself more damage with the remedy.

The Qualcomm dispute, on the other hand, placed Apple with a valuation around 10x Qualcomm’s — like Apple was the abused party. To draw an analogy, it would be as if during the Netscape-Microsoft dispute, that Microsoft had argued that Netscape abused power. Given that Apple demanded that Qualcomm reduce its already tremendously discounted pricing, it appeared as if the actual abuser, Apple, was the one crying foul.

Last week Qualcomm won its appeal long after settling with Apple, after Apple allegedly got caught fabricating evidence. This decision is critical to the long-term position of the U.S. in the technology market. Let’s talk about that this week — and we’ll close with a fascinating new non-smartphone from Microsoft.

US Technology Leadership at Risk

Over the centuries, power has shifted between nations mostly because the nations in power don’t adequately shift to new technologies or, more likely, focus on tactical gains while sacrificing strategic advantages.

England, Spain, Germany, and France were the world powers before the U.S. Later, after the USSR broke up, the U.S. stood alone for a time. Now it’s the European Union (which appears to be slowly breaking up), the U.S., and China that seem to own the top spots.

China, at least before the pandemic, was on the rise while the EU and the U.S. appeared to be on the decline. The pandemic has caused a critical mass of companies to rethink their dependence on Chinese manufacturing.

Focusing on the U.S., given that the Chinese government was aggressively helping to build out their technology capabilities, it needed to identify and aggressively support the companies that were assuring the U.S.’s technology position. It did, but only after Apple-backed Broadcom almost bought Qualcomm and stripped it of assets.

Apple had driven the effort against Qualcomm and was attempting to follow at a larger scale what has appeared to be a nefarious long-term strategy: pound suppliers into failure and then buy the related tech on a fire sale; then make it exclusively theirs while denying that same technology to competitors.

While this would have enabled Apple to wipe out smaller competitors potentially, it also would have placed Apple squarely in the sights of the next antitrust action for any sequential abuse of monopoly power.

Apple’s executive management didn’t seem to get the risk it was taking by going down this questionable path.

Now the irony here is that all of this was going on while Google was facing antitrust challenges, which mainly resulted in their participation in an earlier antitrust action against Microsoft.

This result is often the case, where the emerging company screams for help. The request then spins up a regulatory body against the problem the company pointed out, only to find that the regulatory body doesn’t report to the company.

Once the complaining company (in this case Google) itself reaches dominance, the regulatory body, using resources that the earlier action created, then uses those resources against the company. Google now regrets its earlier action against Microsoft because it is now in a similar hot seat that it helped create. This is the exemplification of the phrase “what comes around, goes around.”

It is certainly appropriate for companies that are likely to remain relatively small, ironically like Qualcomm, to use the government to complain about abuse. Still, a company trending to become a monopoly runs the risk of having what it initiated come back and bite it in the butt. That is what mostly happened with Google in front of Apple, and Apple missed that meeting.

Once it came out that Apple had allegedly manufactured the evidence it had used to establish their actions, and that formed the foundation for the FTC complaint, the FTC should have walked away. Instead, it seemed to double down despite the lack of foundation.

Speculation at the time was that this was tied to FTC legal performance metrics which measured wins and losses. By doubling down, it moved a potential negative metric to the following year and, since appeals are rarely won, had a chance of not losing at all.

But if true, that would imply that winning was more important than actually enforcing the law, effectively making the FTC appear corrupt. While no evidence that the FTC commissioners had been bribed has been forthcoming, the optics of one of the wealthiest companies in the world getting what appears to be illicit help from a federal agency does at least create the impression of impropriety.

Given that there is a lot of concern that the legal system doesn’t work at the moment, the correct response from the appellate court was critical, and fortunately, that is what happened.

Qualcomm’s value to the market is that it supplies a core level of technology that is available to anyone that needs to license it. This capability allows a small company like OnePlus (that manufactures the phone I currently carry) to compete with a much larger company like Apple — and build an arguably better product. The smaller firm can apply its limited innovation capability to this baseline and create a device that is compatible with the ecosystem and assures that ecosystem remains open to all.

So the firm isn’t just critical to the U.S. in terms of assuring leadership, it is critical to the market ensuring plenty of competition in phones — and with Apple focused on increasing prices and margins to offset market share losses, if that competition isn’t assured, Apple could be in more antitrust difficulty than it is currently. (Apple’s exposure has increased with Fortnight pointing out that Apple is a bad actor; and even Russia is crying foul.)

Wrapping Up: Abuse of Power Is a Company Killer

Every monopoly that has been broken up has as a cause of abuse of power. It is an endemic problem that Apple and others have demonstrated for some time.

It’s easy when you are the most influential company (or one of the most) in a segment or supply chain, to use power to cover up for bad operational decisions, to increase prices, or force suppliers to lower theirs. But governments tend to treat such actions as illegal, and their responses to this can be draconian.

This judgment showcases that the U.S. legal system, while clearly under a lot of stress, still works. For now, the U.S.’s and Qualcomm’s technology leadership positions remain intact.

Apple is at the center of the latest dominant smartphone design. Yes, several companies have come up with and implemented foldable screens, but these phones don’t rethink the model; they find creative ways to increase screen real estate to turn the phone into a small tablet. But much like the smartphones that preceded the iPhone were overly focused on business, the phones of today, thanks mainly to Apple, are overly focused on entertainment.

Particularly given that, thanks to the pandemic, we are now even more tightly tied to our work through our devices, I believe it is time for that pendulum to flip back. The Microsoft Surface Duo is just such a design change. The Duo isn’t a device with a larger display, it’s a device with twin displays that reflects a change that hit many of us who work on desktop computers some time ago.

Multiple monitors allow a user to better multitask, which is critically important during this age when applications like Microsoft Teams combine our need for human companionship, with video feeds of participants, with our need to see shared content.

The Duo isn’t a phone or a tablet. It’s a connected communications device optimized for collaboration, and it could become the first dedicated front end what may eventually be a dedicated Azure user appliance: a new and extensively updated terminal, if you will.

Now, this is a first-generation product, and granted, the ideal user is someone like me who likes having something unique and different. But the Duo is most useful for those that spend a lot of time on collaboration products, particularly Microsoft Teams, while away from their computer. 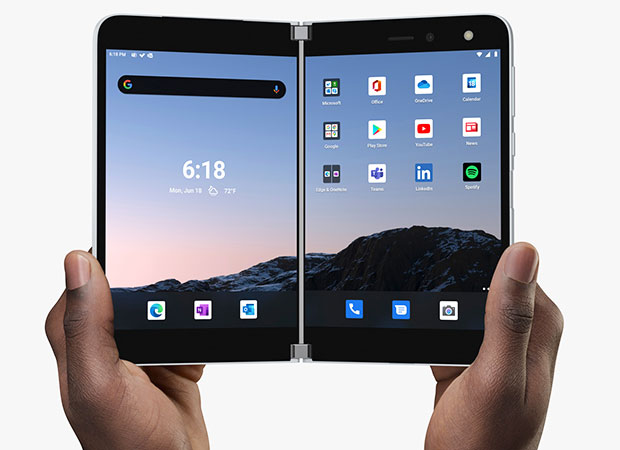 It is excellent for movies and certainly can be used for games, but it shines for folks that need dual screens. Let’s say you want to read something while still watching a security camera or baby monitor, or you want to watch a movie while watching for breaking news, e.g. if you’re a reporter, PR, or need to be ready to respond to a known coming crisis.

As with all new devices, this one will evolve significantly over the next two versions, but for the right user, it could be a better alternative than the current screen phones. I think the market is overdue for some real innovation, something more than just a larger screen.

The Duo is a blend of hardware and unique software that allows you to make good use of its dual-screen configuration, and it resides on Android to assure strong application support. So, for me it could replace both my phone and my tablet while better enabling my ability to make video calls from where I want to be — rather than in my office where I generally am.

This device will be followed by a similar Surface Neo based on Intel’s new Tiger Lake platform. It should also help us think around current design constraints and imagine new innovative devices that embrace the new normal.

Because it signifies needed change, the Microsoft Surface Duo is my product of the week.

The opinions expressed in this article are those of the author and do not necessarily reflect the views of ECT News Network.