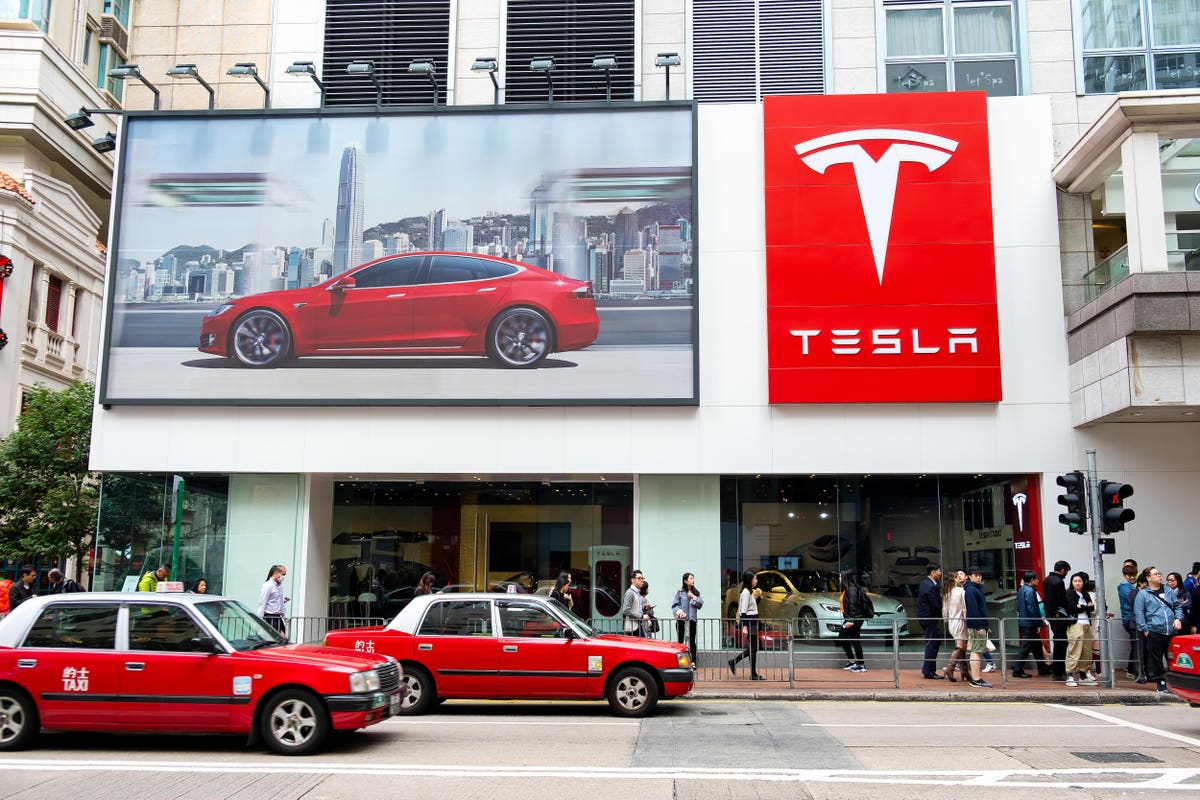 Tesla Valuation Dropped $40 Billion In A Day. More To Come?

Tesla’s stock (NASDAQ: TSLA) fell 9% on Thursday to about $407, driven by a broader sell-off in technology and high-growth sectors. A sizable drop! For perspective, Tesla lost $38 billion in value in a single day – that’s more than Ford’s current market cap ($27 billion) and just below GM’s market cap ($42 billion). However, Tesla’s stock remains up by about 4.5x year-to-date, with a valuation of about $380 billion. That makes the company more valuable that Dow constituents such as Procter & Gamble ($344 Bil), JP Morgan Chase ($309 Bil), UnitedHealth Group ($301 Bil) as well as S&P 500 constituents Mastercard ($344 Bil), NVIDIA ($321 Bil). However, is Tesla fairly valued at current levels, or is a recovery imminent?

See our dashboard analysis Tesla Down -9%, But Still More Valuable Than Procter & Gamble, JP Morgan for more details on how Tesla compares with its peers with a similar market cap.

Tesla’s rally this year was driven by strong demand from China, better than expected quarterly results, and the company’s recent stock split. Moreover, investors are betting that the disruption caused by the Coronavirus in the automotive industry could make it harder for mainstream automakers to shift to electric vehicles, giving Tesla a wider lead. That said, Tesla looks very richly valued with its P/E standing at over 230x, based on consensus projected 2020 earnings, meaning that the company will have to execute very well to simply justify its current valuation, let alone drive further stock price gains.

Tesla’s (NASDAQ: TSLA) stock jumped 13% on Wednesday following the company’s announcement of a five-for-one stock split. While the split doesn’t change the fundamental picture for Tesla, it does make the stock more accessible to smaller investors, considering that the stock is up over 3.5x year-to-date and currently trades at about $1,550. This could drive demand for the stock to a certain extent, considering Tesla is a high profile name with a large retail investor following. The split will go into effect on August 31.

Separately, Tesla continues to see strong deliveries in China, with its Model 3 seeing 11k deliveries over the month of July, driven by production at the company’s Shanghai factory, a growing supercharger network (4k Superchargers projected by the end of the year) and lower starting prices, which allow the vehicles to qualify for government subsidies. While July deliveries are below the roughly 15k deliveries the company saw in June, the Model 3 remains the best selling EV in China. Tesla is looking to boost sales further as it launches the Model Y compact SUV in the country in 2021.

However, rising trade and diplomatic tensions with China could prove a concern for Tesla’s Chinese business. Under these circumstances, is Nio – a premium Chinese EV start-up – a better bet to play the Chinese EV market compared to Tesla? Find out more in our dashboard analysis How Does Nio Compare With Tesla? Otherwise, looking for more ways to outperform the broader market with less risk? Our Pershing-inspired portfolio based on the thinking of Bill Ackman’s firm Pershing Square offers a unique risk-reward profile by combining growth, performance, and risk mitigation criteria.

Tesla published Q2 2020 results on Wednesday, posting a net income of $104 million – well ahead of consensus estimates that projected a small loss. So how did Tesla manage to beat expectations by such a wide margin? Soaring regulatory credit sales were the primary reason.

The sale of regulatory credits rose to around $428 million in Q2, up from about $354 million in Q1 and just $111 million in Q2 2019. As these credits are almost pure profit (Tesla probably incurs no direct expenses to earn them), the company would very likely have reported a loss on a GAAP basis, if it didn’t recognize these revenues. Moreover, we estimate that Tesla’s Automotive Gross Margins would have been lower by over 600 basis points (6%) in Q2 2020, if not for these sales.

So why are Tesla’s emission credits sales soaring, when its automotive deliveries grew by just 3% sequentially and are down by about 5% year-over-year? Firstly, revenue recognition for these credits is quite lumpy and Tesla could sell vehicles in a quarter and recognize revenue from related credits in future quarters. Secondly, stronger demand for credits might also be driving up the price. The European Union introduced more stringent emission norms this year, requiring average Carbon Dioxide emissions per kilometer to drop to 95 grams from an average of over 120 grams in 2018 for passenger cars. Considering this, automakers need to buy credits from clean vehicle manufacturers such as Tesla in order to avoid large fines for breaking these new emissions rules. Fiat Chrysler is a large customer for Tesla’s credits – agreeing to buy credits worth roughly $2 billion over 2020 and 2021. [1]

To be sure, this cash cow won’t last for too long. In the medium- to long-term, mainstream automotive companies will scale up their zero-emission vehicle sales, reducing the need to buy credits from Tesla. However, Tesla should continue to improve its margins and profits via higher software sales and battery improvements (related: A Detailed Look At How Tesla’s Battery Costs Impact Its Gross Margins). Tesla’s self-driving software upgrades, which cost about $8,000 per vehicle currently, are highly lucrative and we estimate that they contributed about 400 basis points (4%) to Tesla’s Automotive Gross Margins of 21% in 2019. (See our analysis: How Do Tesla’s Software Upgrades Impact Its Margins?)

Tesla posted a stronger than expected set of Q1 2020 results, despite the coronavirus pandemic, with revenues growing by ~32% year-over-year and adjusted profits coming in at $227 million, versus a loss of about $494 million a year ago. While the company benefited from strong deliveries of the Model 3 and a production ramp at its Shanghai factory, much of the improved profitability came from higher sales of emission credits which soared to about $354 million from an average of about $150 million over the last four quarters. If not for the spike in regulatory credit sales, Tesla would likely have barely broken even. Below, we take a look at how sales of regulatory credits have helped Tesla and why we believe the near-term outlook for the company looks quite challenging.

For more details on the outlook for Tesla’s revenues, view our dashboard analysis Tesla Revenues: How Does TSLA Make Money?

What Are Regulatory Credits And How Do They Help Tesla?

Several U.S. states and countries have Zero Emissions Vehicle regulations that require that clean vehicles account for a certain mix of auto manufacturers’ sales each year. If automotive companies, which still largely sell internal combustion engine-based vehicles, don’t meet these standards, they can buy credits from the likes of Tesla that earn credits, as they only sell electric vehicles. Although the revenues from these credits are quite volatile they are very lucrative for Tesla, as it likely incurs no direct costs to earn them. The bump in these regulatory credit sales is likely to be partly responsible for the company’s automotive gross margins expanding 300 bps sequentially to 25.5%. While it’s possible that such credits could become more valuable in the medium term, as new emissions regulations come into play in Europe and states in the U.S. look to enforce stricter norms, the current collapse in global auto sales could hurt revenues from ZEV credits in the near-term for Tesla.

Outlook Remains Tough For Tesla In The Near-term

Tesla is likely to face significant near-term revenue pressure and the company has put its 2020 guidance on hold, due to uncertainty surrounding the coronavirus pandemic and the broader economic recovery. There is little reason for people to buy expensive cars right now and Tesla’s production at its Fremont facility, which accounts for about three-quarters of its annual capacity, remains suspended and there’s no clarity as to when it could resume.

However, despite significant near-term headwinds, the company’s stock has continued to rally, almost doubling year-to-date. The company trades at a P/S multiple of about 6x, compared to GM which trades at about 0.3x, based on trailing revenues. This means that the stock has significant valuation risk, making it react more strongly to negative news compared to its peers.

Our theme Autos Fight COVID-19 contrasts the performance of Tesla stock, which is up almost 90% YTD, with mainstream automakers, who have seen their stocks fall by about 40%.