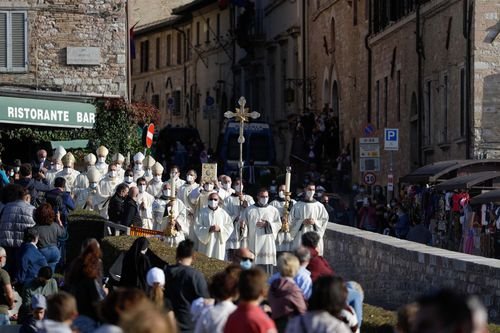 A teenage “computer genius” could be on the path to sainthood after he was beatified by the Catholic Church.

Carlo Acutis, who died of leukemia at the age of 15 in 2006, was beatified on Saturday in the town of Assisi, Italy.

Beatification is the penultimate step in the sainthood process, and means the candidate can be referred to as “blessed,” and that one miracle has been confirmed in his or her name.

Another miracle is required for canonization, the formal act of declaring someone a saint.

The teenager used his taste for technology to create a website that traced the history of Eucharistic miracles, which has been used by more than 10,000 parishes worldwide, the Vatican said.

According to the Vatican, Acutis was religious from a young age, despite his mother having only been to mass “three times… in her life.”

The Vatican announced that Acutis would be beatified following claims that he cured a Brazilian boy suffering from a rare disease through intercession.

Acutis was born in London to Italian parents before the family moved to Milan, where he lived until his death, the Vatican said.

Acutis, described by the Vatican as a “computer genius with a love for the Eucharist” is believed to be the youngest contemporary person who has been beatified.