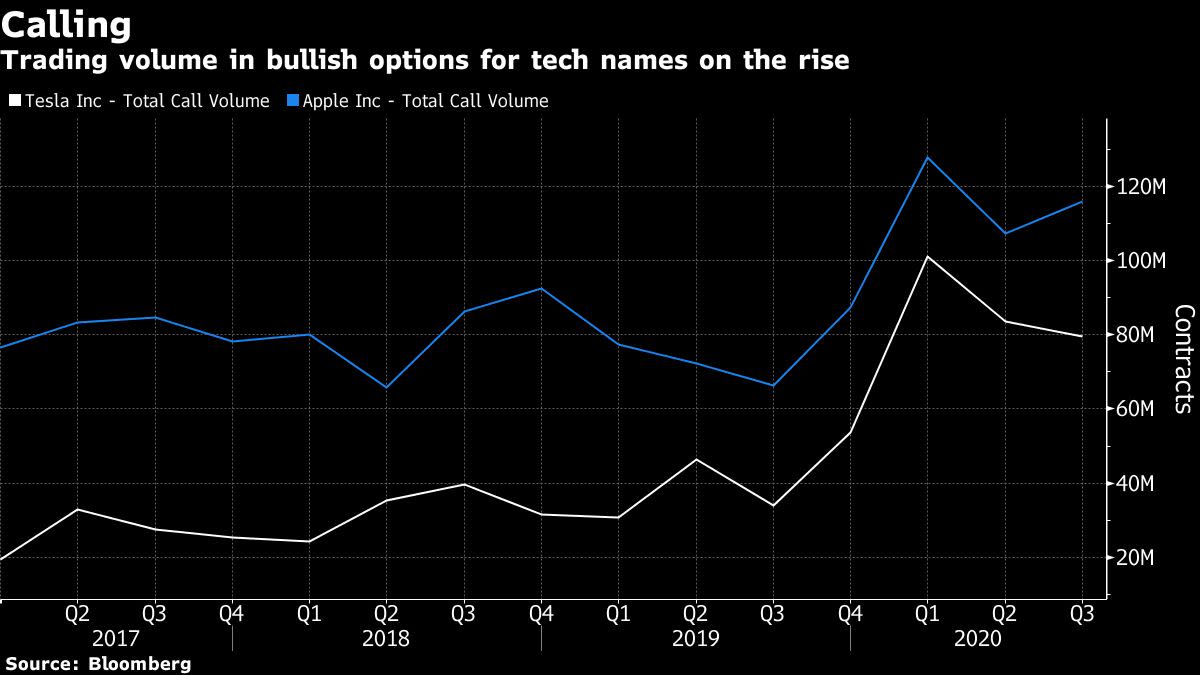 (Bloomberg) — Wrinkles in the relationship between stock and options markets have a few Wall Street sleuths claiming to have unearthed clues to the storm raging in technology shares over the last few weeks.

They point to recent days when implied volatility on the S&P 500 and Nasdaq 100 rose even as equities rallied — a rare alignment that is out of step with historical patterns. One theory is that an explosion in demand for call options to bet on megacap tech is feeding into gains in the stocks as dealers hedge.

Another view sees something less exotic — investors protecting their portfolios in the volatility market in case stocks notch outsize price swings in the grip of the pandemic and the presidential election cycle.

Whatever the reason, traders have struggled to reconcile a steady rally in equities with the increase in implied volatility, which can be loosely defined as the price of equity options and usually falls when shares go up. They’re looking for explanations amid a rally that has driven the Nasdaq 100 high in 10 of the last 12 days and pushed companies such as Tesla Inc. and Apple Inc. to giant advances.

At IPS Strategic Capital, head trader Pat Hennessy sums up the theory that points to call options. He reckons that strong demand for bullish derivatives on the biggest tech names has spurred dealers to bid up both stocks and their implied volatility indexes.

“The hedging of these positions is causing a feedback loop where vols and spot rise together,” Hennessy wrote on Twitter.

People are definitely trading a ton of options. Across U.S. exchanges last week, they bought 22 million more call contracts than they did puts, higher than the previous record set in June, according to Sundial Capital Research Inc. This happened as overall volume declined on the New York Stock Exchange, pushing speculative trading as a share of overall turnover “through the roof,” said Sundial president Jason Goepfert.

“The single stock option market is not that small,” wrote Vincent Cassot, head of equity derivatives research at Societe Generale. “Apple options market is now way bigger than the one on the Russell 2000.”

As for its impact on the equity market, the theory goes like this. Rampant demand for call options in names like Facebook Inc. and Salesforce.com Inc. has left derivative dealers on Wall Street dramatically short gamma, a measure of the change in an option’s sensitivity to moves in the underlying shares.

As the stock rises, the dealers need to buy more to hedge their exposure. With a large number of call contracts outstanding and “relative illiquidity” in some of these single-name shares, they have been forced to turn to proxies such as the S&P 500 and Nasdaq 100, according to Hennessy. In order to hedge, dealers have been buying implied volatility on these benchmarks too.

Some see a small cohort of buyers driving the dislocation. A “massive upside premium buyer” has spent billions of dollars on single-name calls in megacap tech stocks such as Salesforce, Amazon.com Inc., Apple and Netflix Inc. over the past month, according to Charlie McElligott, a cross-asset strategist at Nomura Securities. That’s forced dealers to buy Nasdaq 100 and S&P 500 futures in order to hedge those relatively illiquid single-stock options positions, he said.

Such a pattern may have played out in Saleforce’s 26% post-earnings surge, which dragged a handful of other high-profile tech shares higher, according to McElligott. Dealers were forced to recalibrate their hedges as a result, causing a feedback loop, he wrote.

If short gamma hedging lifted stocks, logically it should also be capable of exacerbating moves the other way. When shares fall, market makers are likely to unwind hedges at an increasing speed, spurring more losses. Examples of such events are common: Volkswagen AG shares in late 2008 or the spike in silver during 2011. Some even saw parallels in Tesla at the start of the year, though those moves look negligible compared with today’s.

As with all things in the world of volatility, nothing is straightforward. Whenever markets are moving in a way someone considers odd, people come out of the woodwork with exotic theories to explain it, and the options market is particularly fertile ground for their theories. While acknowledging the call buying, Credit Suisse Group AG’s Mandy Xu says there’s another factor driving up implied volatility that’s less technical in nature: People worried about a crash.

“Contrary to consensus, this latest bid to implied vol has not come exclusively from the call side; we’ve seen a material increase in hedging demand over the past two weeks,” she wrote in a note today.

Xu cites an increase in one-month S&P 500 put skew, a measure of the price of bearish versus bullish options, rising to a 1-year high — meaning demand for protection is climbing.

In any case, the convergence between the VIX and the S&P 500 Index has historically proved short-lived. The stock benchmark rose 0.8% Tuesday, while the volatility gauge fell.

bloomberg.com” data-reactid=”53″>For more articles like this, please visit us at bloomberg.com