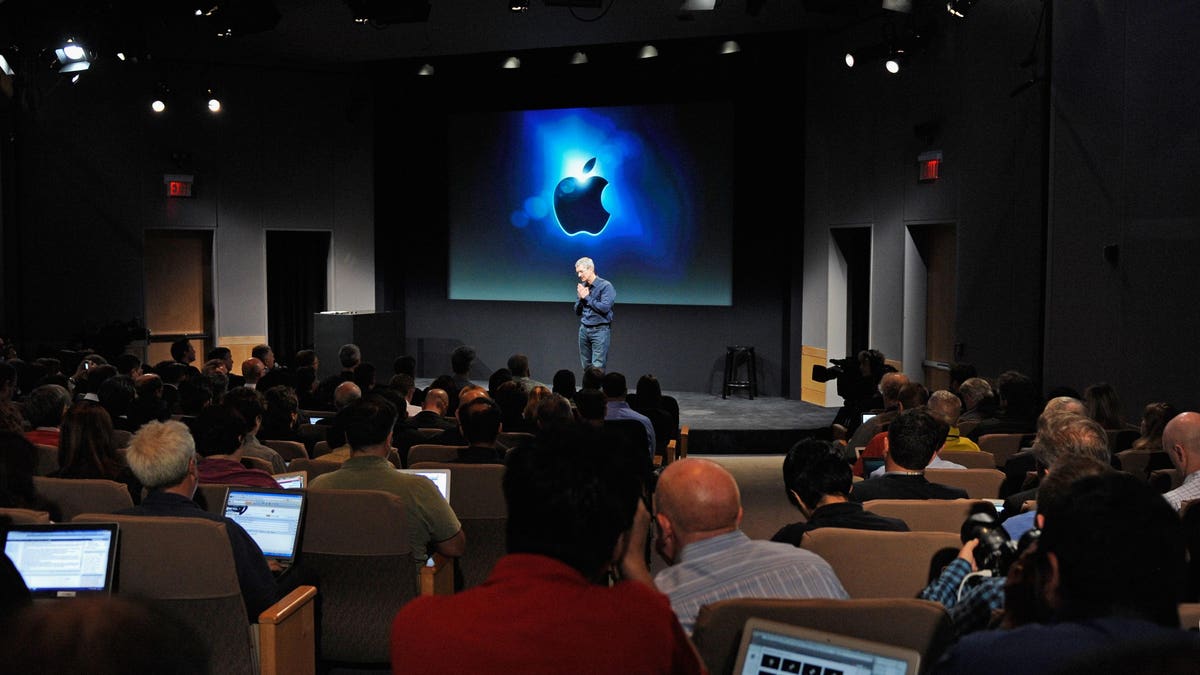 Apple had a mixed beginning for many years, from the time Steve Jobs, Steve Wozniak, and Ronald Wayne founded the company in 1976. Jobs, after departing in 1985, became CEO again in 1997.

For the first few years, he had to reformulate the company and begin his innovation successes. This graph shows Apple’s stock during the process and the eventual foundation in 2003 from which Jobs made Apple into a great growth company. Therefore, I have chosen December 31, 2003, as the best beginning for understanding Apple today.

After a final Steve Jobs-influenced growth spurt, revenue growth slowed markedly. It was a natural development without Jobs’ innovative prowess.

(This graph uses a log scale, so the growth rate can be seen as a straight line.)

Jobs’ ability to maintain a high profit margin was always seen as an outstanding characteristic tied to his innovation. Without him, investors worried that the margin would shrink as products became tired.

The graph shows the gross profit margin (revenue minus direct product/service costs), while below Jobs’ highs, has been well maintained.

This graph comes as no surprise – high profits, but growing at a slower pace

Now to an investors’ favorite measure: Earnings per share

All things equal, earnings per share (EPS) should track profit growth. However, things can be done to tweak this growth higher. Here is the history.

Note the slightly less growth in Jobs’ years. The effect was due primarily to option pay (the EPS are “diluted” by the added shares from the underlying option shares). So, why the growth after Cook took over? That explanation comes below…

Once on a roll, Apple began to build sizeable cash reserves. So, no need to borrow. Additionally, to avoid draining the cash, Jobs paid no stock dividends and made no share repurchases.

Enter Cook and Wall Street advisers, and Apple begins to borrow – about $100 billion in long-term bonds over three years. Since the end of 2017, borrowings have equaled bond repayments.

Wall Street’s hands are clearly visible when those favorite three numbers (share price, EPS and dividend yield) get a little help from their financial maneuverings.

While it may not have been designed this way, note that, at least coincidentally, bond proceeds covered dividend payments. And that means the cumulative share repurchases were paid for with cash. (Note that amount now totals over 1/3 $trillion.)

Repurchasing by corporations was designed to help firms step into a weak period and help “stabilize” the share price (much like Wall Street does following an IPO). A key rule was no purchases could be done to move the stock price up. Later, particularly as option pay became popular, repurchasing was done in larger and larger amounts during normal market periods (still within the rules).

The primary benefit of doing these repurchases was to boost EPS growth by reducing the divisor – shares. With a cash-rich company like Apple, such a strategy was an easy decision.

The secondary benefit is a boost to share price, but not necessarily by share shrinkage, alone. Rather, it is increased EPS growth rate and the popular view that share repurchases are as good as dividends (perhaps more so because of avoiding taxes on dividend income).

Here, then, is what has happened to Apple…

And here is the quarterly pattern of repurchases compared to the stock’s performance. Note that “stabilization” seems to have become less a factor over the past couple of years.

A last issue that affects many companies, including Apple, is now part of growth history (in other words, it no longer carries an asterisk)

The December 2017 tax bill gave profitable companies a significant boost. While the effect on Apple is real, remember that it had nothing directly to do with management skills or company strengths.

The bottom line: Apple has done well under Tim Cook, but not better than under Steve Jobs, as some commentators have suggested

The important point of that statement is to remove any optimism surrounding Apple because of its pre-Tim Cook history. Yes, Apple is growing, but not as much as per share earnings imply – and certainly not in line with the stock price rise.

Therefore, now looks like an appropriate time to worry about Apple’s lack of nearby technical support, as shown in the graph below. And, if Apple reverses course, we can expect other growth stocks to get hit as well.

Apple’s dramatic runup leaves it at technical risk of…