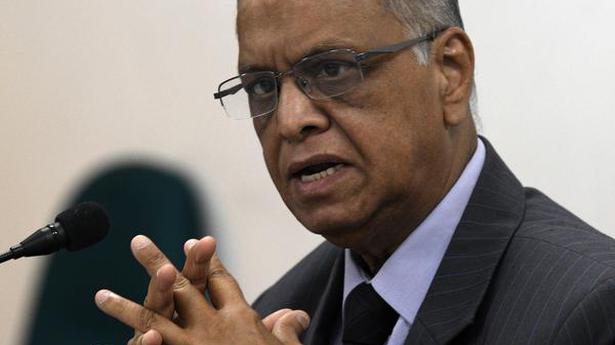 ‘Science and technology are the key to a nation’s progress’

No country has become a developed nation without developing a scientific and technological open service skills and in this context, institutes like the Council of Scientific & Industrial Research (CSIR) are very important for research progress, said Infosys founder N.R. Narayana Murthy.

He was addressing participants of the online ‘Summer Research Training Programme 2020’organised by the CSIR-North East Institute of Science and Technology (NEIST), Jorhat, Assam. “CSIR laboratories provide an environment of deep thinking, discussing, collaboration, debating, inter-relationary approach to problem solving, data and fact orientation among many other aspects of research. Science is about unravelling the secrets of nature and understanding the reality around us,” he pointed out.

NEIST director G. Narahary Sastry, who hails from Hyderabad and has previously worked with IICT here, interviewed Mr. Murthy online where he stated that students should not get “frustrated” upon not getting admission into IITs as “good education is not limited to IITs only” and that it is possible to obtain “good education from any institute as long there is reasonable competence, hard work and desire”.

He was also against preventing highly educated bright minds from migrating with any law as “we live in a world of globalisation and India is a part of that” yet it is our “responsibility to provide an atmosphere of nurturing excellence”. The IT Czar also emphasised abilities to fluently communicate in English.

Competence, character and commitment are the three pillars of success, he said, adding that “success is bringing smile on the faces of people, we need to care for the other people to become successful and have to share joy and sorrows of other people”. Corruption in bureaucracy and lack of professionalism in planning are the country’s major bottlenecks, he said and expressed the hope that the younger generation will change the direction.

“India can solve its problem of poverty by creating new jobs, convert ideas into jobs and wealth, and create an environment for encouraging entrepreneurship,” he maintained.

About 6,000 participants through different online platforms from all over the country participated and at least 16,000 students of different disciplines registered and trained for the summer programe under the leadership of Dr. Sastry, said Ranjana Aggarwal, director of National Institute of Science Communication and Informed Resources.

You have reached your limit for free articles this month.

Find mobile-friendly version of articles from the day’s newspaper in one easy-to-read list.

Move smoothly between articles as our pages load instantly.

Enjoy reading as many articles as you wish without any limitations.

A one-stop-shop for seeing the latest updates, and managing your preferences.

A select list of articles that match your interests and tastes.

We brief you on the latest and most important developments, three times a day.

*Our Digital Subscription plans do not currently include the e-paper ,crossword, iPhone, iPad mobile applications and print. Our plans enhance your reading experience.