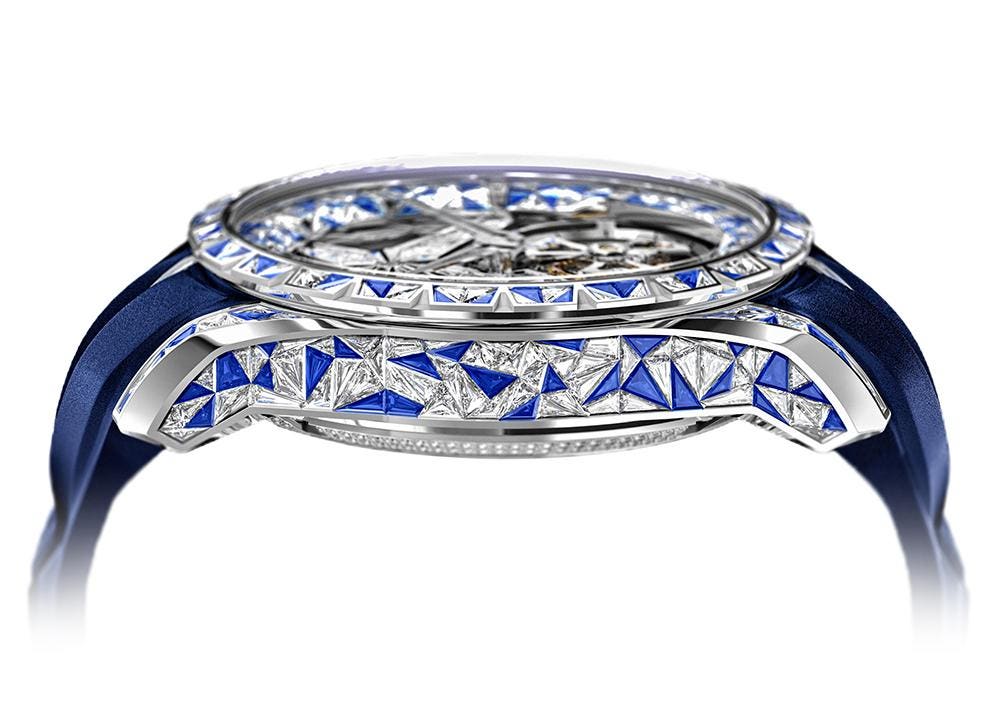 Roger Dubuis admits it has gone a bit mad with its latest watch, the Excalibur Superbia, a one-of-a-kind double flying tourbillon set with 600 diamonds and sapphires totaling 11 carats. Craziest of all, is that the watch, at 45mm x 14.4mm thick, is designed for a man – or any future owner willing to pay the $860,000 price tag.

The gems are set in the most difficult way humanly possible. All 600 of them are invisibly set, which means the pavilions are grooved at a precise angle to allow them to snap into a metal grid. Except that here, the grid is not linear but curved. And every gem is cut into a triangular tetrahedron shape, which means each one of them has a delicate pointy end that is easily broken at the cutting or setting stage. Oh, and every one of them is slightly different, which means each opening in the grid had to be machined individually.

It took hundreds of hours just to program the machines to cut the openings in the grids on the case, bezel, flange and buckle. And more hundreds of hours to mill the grooves on each gem – not only were no two gems were cut exactly the same size or dimension, but each is set at a slightly different angle. In some places, the delicate tips of six or seven gems converge at the same point in the setting, all coming from different angles. “It was a nightmare for even the best gemcutters and gemsetters,” says Roger Dubuis CEO Nicola Andreatta. It took each gemsetter an average of 30 minutes to do a single groove, corresponding to 900 hours for this operation alone on all three sides of the 600 diamonds, plus 420 hours to set the case and bezel – and that doesn’t include the stone-cutting.

The gems are set into a case made of white gold, but not just ordinary white gold. It is white gold PD 210, which is laced with palladium to make it extra white, and extra expensive. Double tourbillons are nothing new for Roger Dubuis. They are a specialty. But this movement is new, the caliber RD108SQ, inspired by an original version launched in 2005, the first double-regulator caliber connected with a differential. It has a 72 hour power reserve, and its decorated to Geneva Hallmark standards, which means every surface of the movement, even those we don’t see, is finished in some way.