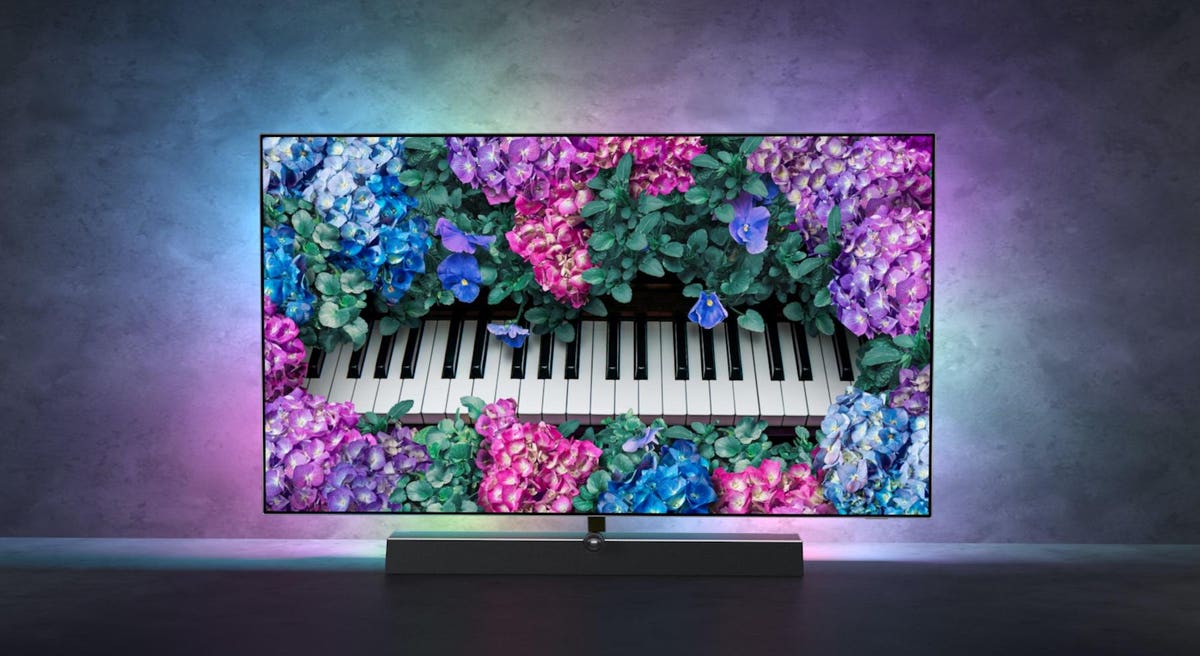 Philips has just taken the wraps off a range of new AV products it’s bringing to the European market in the latter half of 2020. Including, most excitingly, a new range of premium OLED TVs.

The OLED+935’s design sees the gorgeous, steel-framed screen mounted above the large external speaker enclosure, with the latter actually providing the TV with its support when it’s positioned on a desktop. The speaker enclosure looks as good as the TV, too, thanks to its angular sculpting, aluminium micro mesh top plate, and Kvadrat fabric.

Plus, of course, as with all Philips’ premium TVs, the screen is illuminated from behind by Ambilight. As well as being able to track the colour and brightness of the pictures you’re watching as usual, the four-sided OLED+935 Amibilight system introduces two new Ambilight modes. Ambisleep uses subdued, warm colour tones accompanied by nature sounds to create a relaxing, comfortable atmosphere to help you sleep. Ambilight Air, meanwhile, allows the TV’s Ambilight system to join forces with Philips’ new W6205 and W6505 wireless speakers, so that the speakers emit their own Ambilight output in sync with the TV’s.

Even the OLED+935’s remote control is a cut above the norm, thanks to its Muirhead leather rear finish and cool button backlighting.

While the OLED805 OLED TVs benefited from some of Philips’ new ‘AI’ picture features, the OLED+935s get a completely new picture processing chip that takes the use of AI to a whole new level.

As with the OLED805 models, the foundation of the OLED+935’s new P5 AI+ processing is Philips’ use of neural networks to analyse millions of images so that its latest TVs can more effectively categorise content into one of five picture types: Nature, Face, Motion, Dark and ‘Other’.

When an incoming image falls into one of the first four categories it gets a whole new set of picture processing algorithms applied to it, designed to deliver much more effective and natural results than would previously have been possible ‘on the fly’. ‘Other’ is the fall back position if an image can’t easily be categorised, in which case it has picture processing similar to that used by last year’s Philips TVs applied to it.

Key extra features introduced by the OLED+935’s chipset are as follows. First, AI Smart Bit Enhancement 2.0 is designed to remove colour banding from HDR sources without removing detail, getting, it’s claimed, near 14-bit levels of precision even out of 8-bit video.

AI Machine Learning Sharpness, meanwhile, delivers much more intelligent and natural image sharpening. It does this by being able to identify high, medium and low texture areas in any given image, as well as areas of noise, banding and skin tones, and then applying different, more appropriate sharpness processes to each different image segment.

This looks for the boldest highlights in an SDR image and gives them an extra brightness boost to expand the HDR effect – which simultaneously yields more contrast and apparent detail. Yet this is always done, Philips adds, with an eye on ensuring that the picture still looks natural.

The OLED+935 additionally breaks the image down into far more separate zones for analysis than the OLED805 (around 500 times more, apparently!). It uses this talent, too, to deliver a new anti OLED Burn In measure based around dimming down static areas of the image slightly. Philips claims that this new approach can reduce burn in ‘concerns’ for 95% of content.

As with the OLED805, the new OLED+935s will play all the main HDR formats, including HDR10, HLG, HDR10+ and Dolby Vision. There will also be support for the Filmmaker Mode following a firmware update later in the year – though amusingly Philips openly states that it would prefer you used one of its own processing-rich picture settings to get the best results from its new TVs!

The only feature disappointment is the lack of any support for next-gen gaming features such as variable refresh rates and 4K playback at 120Hz.

Turning to that huge external-yet-integrated speaker enclosure, its highlights are its dedicated ‘Dolby Atmos Elevation’ drivers (AKA upfiring speakers) and the inclusion for the first time in a Philips TV audio system that also carries up-firing speakers of one of Bowers & Wilkins’ unique centrally-mounted Tweeter-On-Top assemblies.

The two 50mm Elevation drivers are designed to deliver Dolby Atmos height effects by bouncing them off your ceiling, while the Tweeter-On-Top is designed to ensure that its high frequency performance is delivered without the blurring you get when tweeters are instead mounted inside larger cabinets.

You can add an external subwoofer via a physical line out if you wish, but Philips/B&W are confident enough in the OLED+935’s speaker enclosure to say that they don’t anticipate that many people will feel the need to do this.

I can say, too, having spent some quality time with a 65OLED+935 already, that these really are seriously impressive TVs.

The 55 and 65-inch OLED+935s are launching this month, with the 48-inch model following in October.