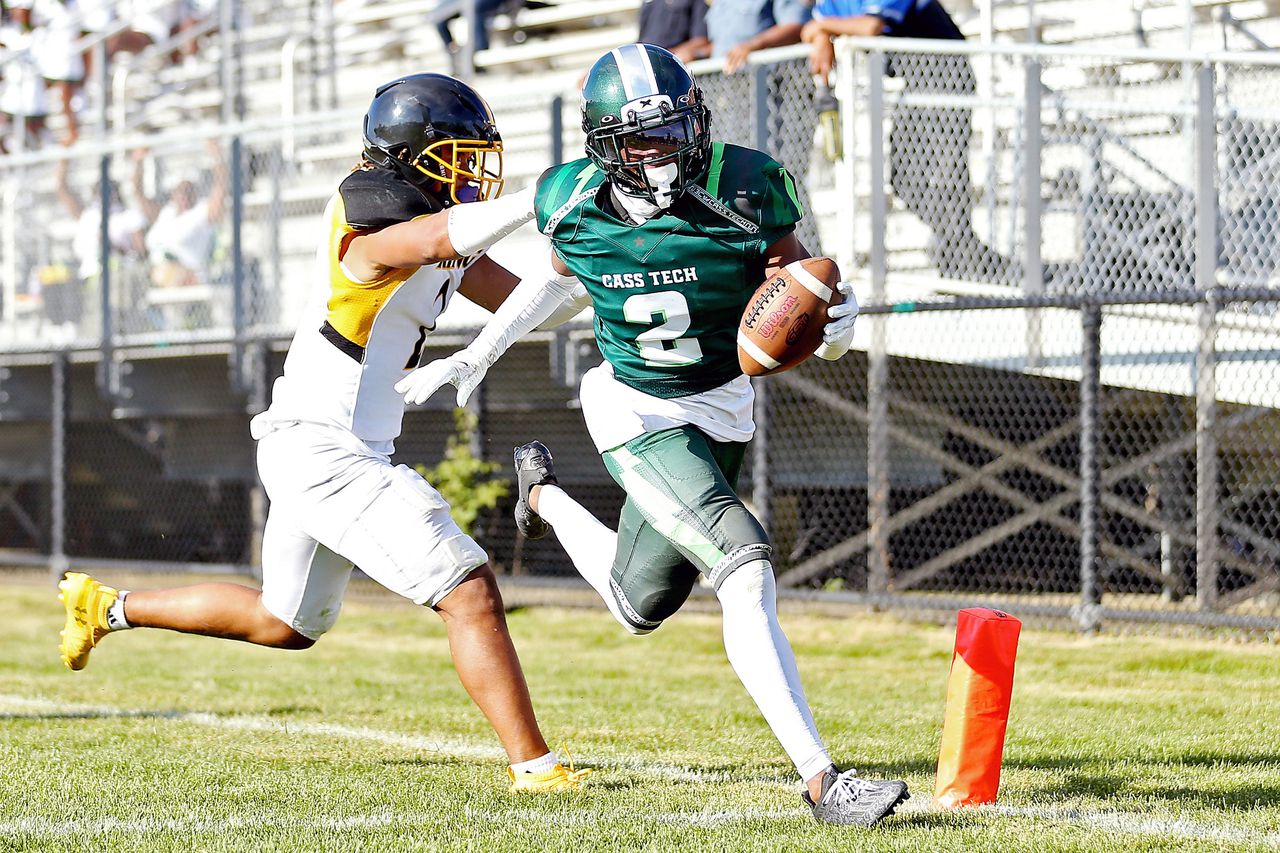 Although the Detroit Martin Luther King football team put up a strong effort, it was a King wearing a Detroit Cass Tech uniform who claimed the spoils of victory.

On Saturday afternoon, Cass Tech senior wide receiver Kalen King put on a show as his 184 receiving yards and 3 touchdowns on just 4 receptions led the host Technicians to a 34-26 victory.

King is a 5-11, 175-pound sparkplug who is committed to play college football as a cornerback at Penn State next year. On Saturday, he showed why he’s a Big Ten talent with touchdown receptions of 75, 41 and 54 yards. King’s 54-yard touchdown came with 2:34 left to play as he blew past the Crusaders’ secondary and Cass Tech sophomore quarterback Leeshaun Mumpfield hit him in stride to turn a slim 27-26 lead into a 34-26 lead.

“I knew I could beat them the whole game,” King said of the final touchdown. “I’d seen him and knew he couldn’t guard me. We just took a shot and it paid off.”

“They embarrassed us last year, so we had to get revenge,” King said. “And we did that.”

Cass Tech actually had a pair of Kings on the field as Kalen’s twin brother, Kobe King, is a running back and linebacker for the Technicians.

Kobe King, who is also a Penn State commit at linebacker, led Cass Tech in the run game with 48 yards and a touchdown on 12 carries. Yet, he conceded he was no match for his brother’s performance on Saturday.

“I know the team is depending on us, and we’re the captains,” Kobe King said. “They just have to piggyback off of us.”

Mumpfield made his first start on Saturday and entered the game as an unknown. He ended up making a significant first impression by going 15-for-28 passing for 315 yards and 3 touchdowns.

Kalen King had nothing but praise for the young quarterback.

“My boy Lee, he’s a sophomore who came in here last year behind our quarterback last year and just took a year to learn and get situated to the program,” Kalen King said. “Now that it’s his time, he stepped up.”

Cass Tech’s defense came up with two huge stops in the fourth quarter, forcing the Crusaders to turn the ball over on downs inside the Technicians’ 10-yard line twice. The final turnover on downs Cass Tech forced happened on the six-yard line with 48.9 seconds left.

Wilcher could not have been more pleased to see how strong his team looked on both sides of the ball.

“What I liked was that we started coming together and communicating and start talking as a team,” Wilcher said. “I think, in order for us to become better, we had to have that principle of men sharpening men. We had to have that attitude that we were going to get better and overcome it together. As long as we stay divided and everyone wants to have their own success, we’re not going to be successful.

The Crusaders missed two extra points on their first two scores of the game, heading into halftime trailing 14-12. However, Detroit King responded on its first offensive drive of the second half when Moore hit Wyche-El in perfect stride on a slant up the middle for an 87-yard score. Crusaders running back Justin Whyte then added the two-point conversion to take a 20-14 lead.

Cass Tech responded on the next drive when running back Alvin Hosendove powered into the end zone from a yard out. After a bad snap on the failed extra point attempt, the teams were tied at 20-20 with 2:51 left in the third.

The Crusaders quickly took the lead back for a final time with 55 seconds left in the third quarter as Wyche-El recorded his third touchdown on a 50-yard reception.

Yet, Kalen King saved his final two touchdowns for the fourth quarter while the Cass Tech defense took care of the rest.