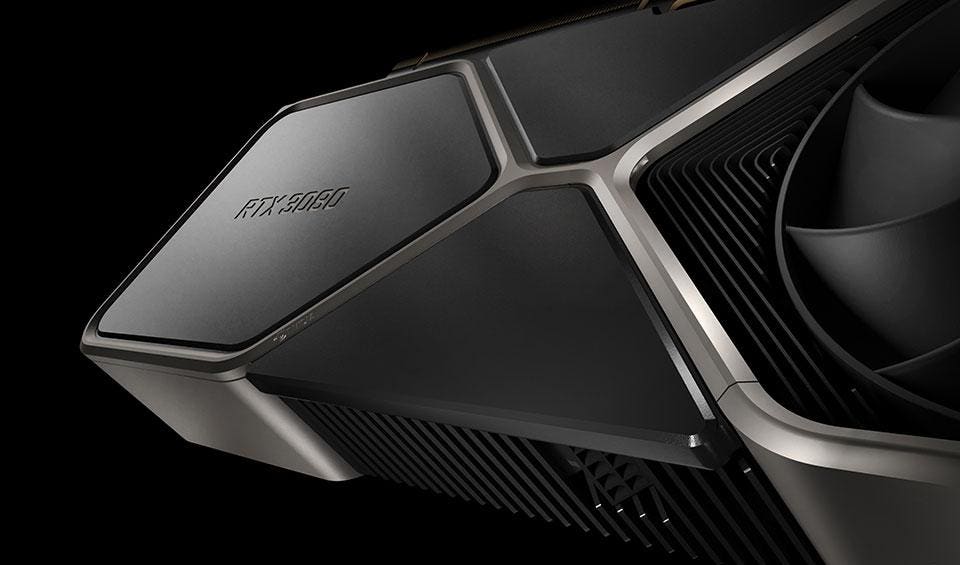 NVIDIA’s Huang announced two flagship graphics cards and one upper-midrange card today, but the bulk of its sales volume will likely be in two of these mainstream products, the GeForce RTX 3080 and RTX 3070.  With respect to this new NVIDIA GPU architecture for gamers, Jensen hammered home the concept of a “triple double,” that is to say a doubling of performance in three key areas: shader operations, ray tracing operations, and tensor operations per second. Versus its previous generation Turing GPU architecture, Ampere delivers roughly 2x the performance in these three areas of the rendering pipeline. Specifically, the GA102 Ampere GPU that the RTX 3080 is based on delivers 30 shader TFLOPs and does two shader calculations per clock, versus 1 per clock in the previous generation. Ampere’s second gen RT cores also deliver roughly 2x the ray triangle intersection throughput of Turing, with 58 RT TFLOPS (versus 34 RT-TFLOPS for Turing) for double the ray tracing performance in games, and 238 Tensor TFLOPS (versus 89 in Turing) for more than double its machine learning throughput. Ampere’s 3rd gen Tensor cores will power NVIDIA’s DLSS 2.0 (Deep Learning Super Sampling) image processing engine for better graphics fidelity. Huang was using round numbers in this “triple double” concept, when the actual peak available throughput is more like 2.7X in some cases (Shader and Tensor ops), or a little less than 2x (1.7x) in the case of ray tracing.

As you might imagine, the resulting Ampere GPU itself, with all of this additional throughput and capability is massive, comprising some 28 billion transistors for a GA102 chip, versus 18.5 billion in Turing’s TU102. NVIDIA’s new GeForce RTX 3070 is based on the company’s GA104 GPU, which is a cut-down version of Ampere that delivers 20 Shader-TFLOPs, 40 RT-TFLOPS and 163 Tensor-TFLOPS, all of which are still significantly ahead of a top-end Turing config. Here are some high-level specs, performance metrics and pricing that Jensen Huang showcased for both cards:

Another area that NVIDIA has caught some flack for historically is pricing. However, this time around, in my opinion the company’s price / performance strategy seems on point and aggressive. When you think about the fact that a GeForce RTX 2080 Ti still retails for $1200 – $1400, the new GeForce RTX 3070 is going to be highly attractive to gamers looking for the value play. Jensen claimed it’s faster than its previous flagship RTX 2080 Ti (likely he was referring to ray tracing-enabled games) and that’s at 2/3rds the price. Let that sink in. And the RTX 3080 at $699 for performance enthusiasts sounds like a much better deal as well.

Then of course there’s the Big Daddy of NVIDIA’s line-up, the GeForce RTX 3090, which the company’s CEO referred to as a “BFGPU.” I’ll let you do the translation there but in company speak this means “Big Ferocious GPU.” Indeed this appears to be the Ampere GA102 GPU in its full fat implementation. Retailing at a whopping $1499, these cards are for no compromise gamers, data and AI scientists and content creators.  This card will deliver 36 Shader-FLOPS (6 TFLOPS more than 3080), 69 RT-TFLOPS ( a massive 11 TFLOPS more for ray tracing than 3080) and 285 Tensor-TFLOPS (47 TFLOPS more than 3080). NVIDIA demonstrated the card powering 8K gaming (with DLSS on) at 60 FPS, with various test subjects slack-jawed and heaping on superlatives about what they were experiencing. I want to see it for myself actually, ASAP (I’m looking at you NVIDIA). The RTX 3090 will be available September 24th. The RTX 3090 also comes with what NVIDIA is calling a “Silencer” which is essentially a larger (read massive), three slot version of NVIDIA’s new Ampere cooling solution. Speaking of which, let’s cover that and a few of the other technologies NVIDIA is bringing to the table with this Ampere launch.

Cooling The Beast And Feeding It Data:  GDDR6X, Ampere’s Thermal Solution And RTX IO For Storage

NVIDIA’s thermal solution for Ampere also looks to be something special, with a push/pull type of configuration and dual axial fans, one that pushes cool air in on the front of the card, exhausting warm air out its back IO plate, and other on the rear side of the card that pulls cool air in from the front of the PC chassis and across its heat pipes to vent out the top, via the PC chassis fan. The nice thing about this setup is that it adds a direct exhaust out the IO backplate to the card, where the previous generation RTX 20 series design didn’t have this. NVIDIA calls this its “flow-through” cooling solution and claims it delivers a 20C drop in temperature for the RTX 3080 (versus the 2080) and a 30C drop in GPU temps for the RTX 3090 (versus RTX Titan presumably). The GeForce RTX 3070 looks to be a shorter, more squat card, with standard, front-mounted dual axial fans. Also, if you had a keen eye above, you’ll note that the RTX 3070 also has standard GDDR6 memory, where the RTX 3080 and 3090 have new GDDR6X memory. GDDR6X appears to be a big deal and could deliver significantly high memory throughput.

Jensen noted that GDDR6X employs PAM4 signaling. This is new technology to me and I’m still researching a bit but essentially, compared to PAM2/NRZ, PAM4 cuts the bandwidth for a given data rate in half by transmitting two bits in each symbol. So, in a nutshell, think twice the data transferred at the same relative clock speed, and when it comes to gaming performance, memory bandwidth and throughput is huge.

Another huge potential win for gamers should be NVIDIA’s RTX IO technology, which plugs into Microsoft’s upcoming DirectStorage API and will be part of DirectX. This allows high speed PC storage like SSDs to stream data directly to the GPU, bypassing CPU and system memory for what Huang claims will be “instantaneous” game loading and much more responsive gameplay on level and texture loads, etc. What’s impressive to me here is that once again, NVIDIA is on the forefront of technology standards, as they were with ray tracing with Microsoft DXR, and is bringing more to the table for gamers than just bigger, faster, more powerful hardware.

And that same mindset of “more than just the hardware” is also evident in NVIDIA’s strategy to bring additional value to gamers, creators and mainstream users with other new technologies that Mr. Huang unveiled, like Omniverse Machinima. OM is a new tool the company will be making available, that allows gamers and creators to make their own in-game characters from something as simple as a webcam shot, with AI-powered character animations and effects, rendered into cinematic creations with an RTX GPU.

The other new features like NVIDIA Reflex, which optimizes the CPU to GPU rendering pipeline to reduce latency for high twitch competitive gaming, and NVIDIA Broadcast that builds on the company’s RTX Voice software, to improve video broadcast quality for streamers, speaks to the company’s keen focus on the market trends in gaming, games streaming, eSports, work from home and other areas that matter most to its customer base. I’m personally eager to see what NVIDIA Broadcast can do for our podcast quality at HotTech.

Finally, a big feather in NVIDIA’s cap is the addition of the hugely popular multiplayer game title Fortnite to its ray tracing-supported portfolio. NVIDIA RT support (for both Ampere and Turing-based cards) in Fortnite RTX will deliver ray traced reflections, shadows, global illumination and ambient occlusion. NVIDIA notes it will bring “new levels of detail and realism” for Fortnite Battle Royale, Creative and Save the World modes alike.

The Wrap-Up And An Analyst’s Take

It may be a little presumptuous to make early projections like this but my initial thought is that Ampere is going to be a huge hit among gamers. From its performance and new features targeted at the gaming and creator communities, to GeForce RTX 3080 and RTX 3070 price points. These are big, powerful flagship GPUs that NVIDIA claims deliver performance at price points hundreds less than the company’s previous generation Turing architecture. I’m also going to be so bold as to say that it’s going to be a very tall order for NVIDIA’s archrival AMD to catch Ampere with Big Navi. The proof is in the pudding as they say, and Big Navi is getting closer but it would be surprising to me if AMD could pull off the upper levels of performance that the GeForce RTX 3080 and 3090 claim to deliver. In addition, NVIDIA is now on a custom, advanced Samsung 8N process node with Ampere gaming GPUs. It’s interesting that Ampere A100 for the data center is based on a different 7nm TSMC process. I think NVIDIA placing its bets on multiple fab process technologies and partners is a very smart business practice as well.

I said it at the start of my coverage and I’ll say it again. This company is on an execution rampage right now and there’s apparently no end in sight. Ampere for gamers is here and it looks like NVIDIA crushed it, again.