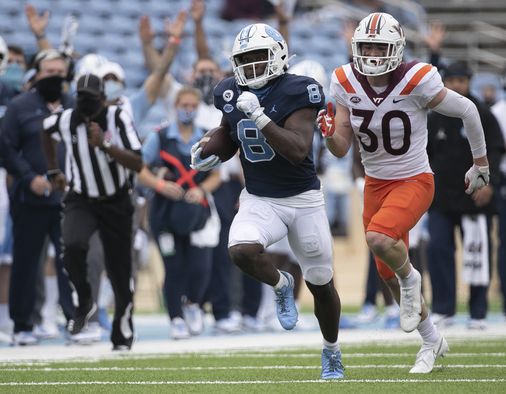 Sam Howell threw three touchdown passes for the Tar Heels (3-0), who got some breathing room on Carter’s 62-yard touchdown run around the right side midway through the fourth quarter.

Next up for the Hokies is a visit from Boston College next Saturday night.

The Hokies (2-1) closed to 42-37 with 15 seconds left in the third quarter on Hendon Hooker’s 33-yard pass to wide receiver Tayvion Robinson. Hooker, making his season debut, came off the bench to play the entire second half in relief of Braxton Burmeister.

The defensive meltdown spoiled the debut of Justin Hamilton, who coached his first game since being elevated to defensive coordinator in place of retired Bud Foster. Hamilton had spent the first two games offering instruction virtually while quarantining at his home with his family.

The secondary, meantime, continued to operate at a considerably diminished capacity, even with the return of starting cornerbacks Jermaine Waller and Armani Chatman. Starting safeties Divine Deablo and Keonta Jenkins were unavailable, and the Hokies lost reserve defensive back Chamarri Conner in the first quarter when the junior was disqualified for targeting when he launched himself into the helmet of Howell, who was sliding at the end of a run.

It was UNC’s first home game since Governor Roy Cooper announced the state would ease public-gathering restrictions related to the pandemic by allowing schools to fill 7 percent of their stadium capacity for fans. That cleared the way for 3,535 fans scattered about the 50,500-seat Kenan Stadium.

Spencer Rattler threw a 25-yard scoring pass to Drake Stoops in the fourth overtime as Oklahoma (2-2) survived No. 22 Texas (2-2), 53-45, as a most unusual version of the Red River rivalry in Dallas ended with familiar dose of drama.

Texas’s Sam Ehlinger threw two touchdown passes in the final 3:28 of regulation after what appeared to be a game-sealing interception by Woodi Washington in the end zone with the Sooners leading 31-14 with five minutes remaining. Ehlinger tossed a 2-yard score to Keaontay Ingram with 14 seconds left in regulation.

The Sooners (2-2, 1-2) had a chance to win in the third overtime, but Gabe Brkic’s 31-yard field goal attempt was wide left after Perrion Winfrey blocked Cameron Dicker’s 33-yard try to start the extra period.

Connor Bazelak threw for 406 yards and four touchdowns despite missing three of his top receiving targets due to COVID-19 protocols and Missouri (1-2) held four times at the 1-yard line in the final minute to escape with a 45-41 victory over No. 17 LSU in a game moved from Baton Rouge to Columbia, Mo., because of Hurricane Delta.

LSU had taken a 41-38 lead when Cade York hit a 51-yard field goal on the final play of the third quarter. But when York tried to extend the lead midway through the fourth, his 45-yarder was blocked, and Missouri needed just four plays — the big one a 69-yard pass to Chance Luper — before Bazelak hit Nico Hea with the go-ahead touchdown with 5:18 to go.

Myles Brennan, who threw for 430 yards and four TDs, quickly moved LSU the other direction. Terrace Marshall Jr. had four catches on the drive, the last a completion to the 1-yard line with 44 seconds left. But after Tyrion Davis-Price was stuffed twice up the middle, Missouri batted down two straight passes to preserve the upset.

Texas A&M turns back No. 4 Florida

The Aggies’ Kellen Mond threw a 51-yard pass to Caleb Chapman for a tying TD with about 4½ minutes to go.

The Gators were driving when Buddy Johnson forced a fumble by Malik Davis, and it was recovered by DeMarvin Leal to set up the game-ending field goal.

Mond passed for 338 yards and three touchdowns to help the Aggies (2-1) down the previously undefeated Gators (2-1).

Florida quarterback Kyle Trask had 312 yards passing and four TDs, but the Gators were done in by the late mistake and another poor performance by their defense. Texas A&M converted 12 of 15 third-down opportunities.