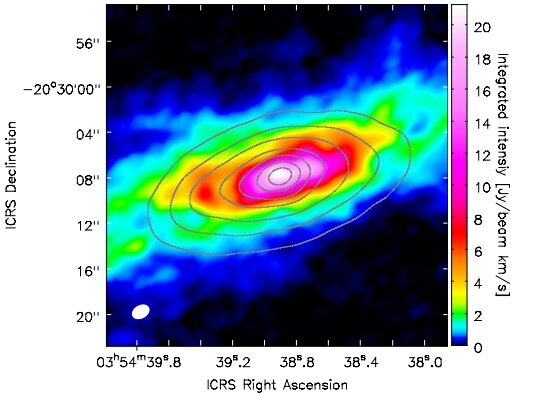 Using the Atacama Large Millimeter/submillimeter Array (ALMA), astronomers from Japan have probed a nearby starburst galaxy known as NGC 1482. They detected a molecular gas outflow that could be essential to improving the understanding of the galactic wind in NGC 1482. The finding is detailed in a paper published August 20 on arXiv.org.

Galaxy-scale outflows of gas, dubbed galactic winds, are driven by star formation or radiation from active galactic nuclei (AGN). Observations show that such winds can transport metal-enriched interstellar material into the circumgalactic (CGM) and intergalactic medium (IGM). Therefore, studies of these outflows can provide crucial insights into the process of star formation and the growth of supermassive black holes (SMBHs) in galaxies.

At a distance of about 63.9 million light years, NGC 1482 is an early-type galaxy in the Eridanus group of galaxies. It has a central bulge surrounded by a gaseous disk (dust lane), and a warm ionized gas extending perpendicular to the disk.

Recently, a team of astronomers led by Dragan Salak of the University of Tsukuba, Japan, investigated the ionized gas of NGC 1482 by conducting high-resolution observations of this galaxy with ALMA. The observational campaign delivered important information about the distribution and dynamics of molecular gas in the studied object.

“In this article, we have presented the first high-resolution observations of molecular gas traced by CO (1–0) and the discovery of a molecular outflow in the nearby starburst galaxy NGC 1482,” the astronomers wrote in the paper.

ALMA observations found that molecular gas in NGC 1482 is distributed in a nearly edge-on disk with an inclination of 76 degrees and a radius of about 9,800 light years. The outflow appears to be extending at least 4,900 light years perpendicular to the disk. The astronomers say that this is the first detection of a molecular wind in NGC 1482.

The base of the molecular outflow is the 100 GHz continuum emission with a radius of approximately 3,260 light years. The researchers managed to derive a star-formation rate (SFR) for the central starburst region of NGC 1482 from the continuum flux density. According to the study, the SFR for this area is at a level of about 4.0 solar masses per year.

Furthermore, the total molecular gas mass of NGC 1482 was calculated to be some 2.7 billion solar masses and the outflow mass was estimated to be around 70 million solar masses. The molecular wind velocity is approximately 100 km/s, while the kinetic energy and momentum of the wind were found to be about 1% and 20% of the initial energy and momentum released by supernova explosions in the central region of the galaxy. Given that there is no evidence of an AGN in NGC 1482, the researchers concluded that the wind in this galaxy is driven by starburst feedback.

In addition, the results suggest that NGC 1482 has experienced a tidal interaction with its neighboring galaxy, NGC 1481. Hence, the authors of the paper assume that the starburst and superwind in NGC 1482 were triggered by tidal interaction. This led to a rapid supply of neutral gas into the galactic central region.