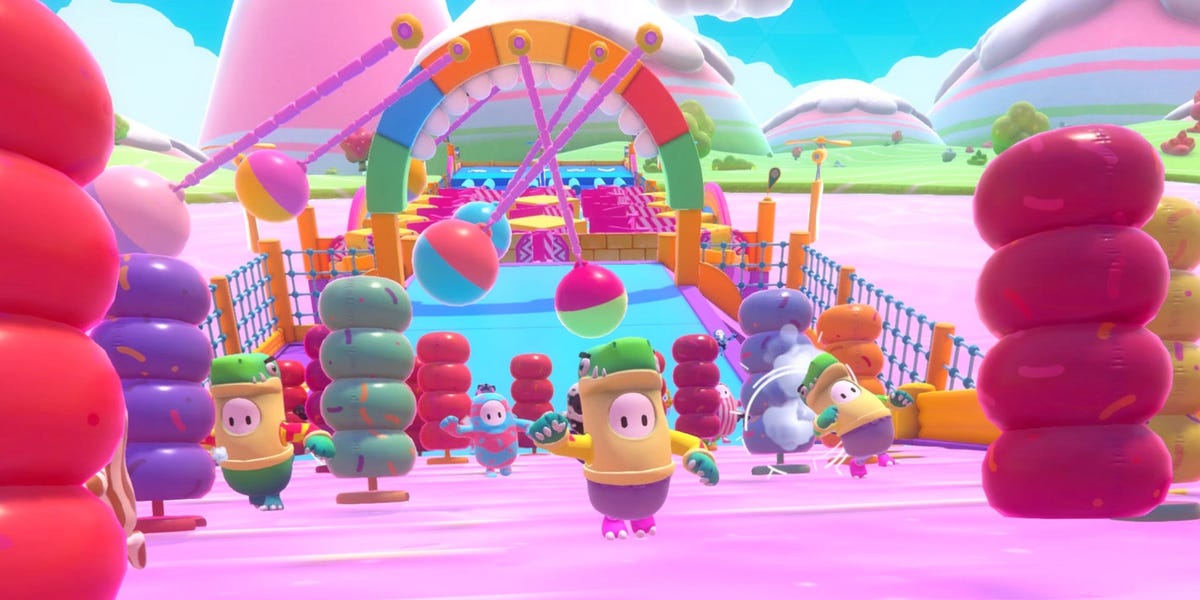 “Fall Guys: Ultimate Knockout” is one of the most popular games in the world right now, and its maker isn’t a multibillion-dollar games conglomerate but rather an indie British studio that, its CEO tells Business Insider, veered close to disaster in 2016.

Mediatonic is the 250-person London-headquartered studio behind the game, and its main problem at the moment is ensuring enough server capacity to support the millions of players jumping into its breakout hit.

“Fall Guys” was an instant success when it went live August 4, and within a month it became the most downloaded title of all time on Sony’s PlayStation Plus service. It was also bought 7 million times on the online PC-gaming storefront Steam.

The battle-royale-style online game is in a similar vein to “Fortnite” or “PUBG” in that each round thins out a large group of players until one champion remains — but with cartoonish jelly-bean characters and a colorful, childlike aesthetic modeled on obstacle-course game shows such as “Takeshi’s Castle.”

Sixty players navigate their clumsy jelly-bean characters through different levels, with each course serving as a knockout round until one winner remains to claim the crown.

Mediatonic primarily grew by building games for other publishers

Mediatonic was founded in 2005 by Bailey and Paul Croft, then students at Brunel University London.

The company became well-established as a “work-for-hire” shop, building games for paying clients rather than primarily developing its own titles.

In 2015, business seemed to be looking promising with four big games in development for partners.

But in 2016, all four were canceled and the indie studio had to rethink its future.

“There was just this unbelievable cascade effect,” Bailey said. “The cancellations were not really about us or the games — they were about companies that were restructuring, or getting acquired, or going through massive changes on their own. We were collateral damage.”

One of the bigger client losses was the British game developer Lionhead Studios, owned by Microsoft, which closed down after a restructure. Mediatonic had just completed development on the Lionhead title “Fable Fortune” when the news hit. Another game, “Fable Legends,” was canceled.

The disastrous year highlighted the drawbacks of not having in-house intellectual property. Mediatonic had sufficient cash reserves to retain staff and stay operational in 2017, but, Bailey said, “it was pretty hairy.”

The studio’s client business picked up again, but in 2017 the studio focused its spare capacity on creating its own titles and issuing briefs to its in-house creative team.

There was one limitation: Don’t pitch a battle-royale game.

It was the year “Fortnite” and “PUBG” took off and popularized the battle-royale format, in which 100 players participate in a virtual fight-out.

Despite this injunction, the Mediatonic game designer Joe Walsh “immediately came back with a battle-royale game,” Bailey said.

The difference was that this battle royale would be silly. Really silly. Walsh was inspired by classic obstacle-course game shows like “Takeshi’s Castle” and “Total Wipeout.”

“The big idea was that this could be the greatest game show on earth if we could scale this up right,” Bailey said. “In the early pitch, they were actually pulling together GIFs and clips from TV shows where [contestants] got hit in the face by giant foam objects, and we were just in stitches. We knew there was something, on a human level, really fascinating and appealing.”

Even if the idea was sound, there were still technical and financial hurdles.

Mediatonic initially wanted “Fall Guys” to involve 100 simultaneous players like other battle-royale games, but it ran into technical difficulties.

“It’s a difficult game to build,” Bailey said. “We were learning as we went about the limitations of multiplayer physics. We spent a lot of time, for example, trying to get the movements of these characters right so they felt sort of clumsy and human — we call it rag-doll physics. We had to hire a lot of new talent around network multiplayer programming, and for a long time that was the thing we were trying to solve.”

He added: “It then became more about the levels and getting to a place where we had enough levels so that you would feel there was lots of variety in the game — you wouldn’t be seeing the same thing over and over again.

“We had some money to invest in this but not, you know, endless amounts, and there were limits to what we could cope with.”

In early 2019 the company raised investment from Synova Capital. Mediatonic extended development on “Fall Guys” for nine months and then took the decision to push it out.

It was a good call. Within its first few hours, the game was such a strain on Mediatonic’s servers that the company had to temporarily suspend PlayStation 4 account creations to stem the flood of players.

A brightly colored escape during the coronavirus

What is it about the game’s Minions-style protagonists that is so appealing?

“I think it’s this thought of unceasing optimism about the human condition,” Bailey hypothesized. “It goes back to why is ‘Takeshi’s Castle’ so funny? Why are we so addicted to watching people get hit in the face, in these awful ways? There’s something hilarious about it, that we put ourselves through that, and it connects an awful lot of people.

“I think also, with coronavirus, people really wanted something positive and just some light relief. The fact it’s such an accessible game has really lit up a lot of people. We’ve had a lot of notes saying how much it’s cheered people up.”

Social media has also played a major part in fueling chatter about the game as it launched.

The game snowballed as big-name game streamers such as Ninja and TimTheTatman livestreamed themselves playing, often interacting with the game’s Twitter account to comedic effect. The game’s official account is run by a millennial Mediatonic employee named Oliver Hindle.

“We didn’t know that would lead to a night where TimTheTatman wins, and 600,000 people turn up on Twitch to watch him do it,” Bailey said, adding that Hindle “wasn’t trying to cultivate that — he’s just being himself.”

TimTheTatman’s Twitter clip of his winning moment had at the time of writing been watched 4.2 million times.

That excludes any revenue from sales of add-on packs that give players extras such as costumes for their characters. These so-called microtransactions often make developers more money than the actual game sales: “Fortnite,” a free game, made $1.8 billion from in-game purchases in 2019, according to Nielsen’s game-industry research arm, SuperData.

It also doesn’t include any advance paid to Mediatonic from Sony for distributing the game free on PS Plus for a month. Nor does it account for the financial agreement between Mediatonic and the game’s publisher, Devolver Digital.

We won’t officially know the financial impact of “Fall Guys” on Mediatonic’s business until summer 2021, but the studio was already profitable before the game launched.

According to its most recent financial filings, the company reported £14 million in revenue for its full-year 2019 and a net profit of £2.6 million.

Since then, “things have changed a lot” financially with the release of “Fall Guys,” according to Bailey, though he declined to reveal specifics.

Repeating the game’s popularity, however, may be tough.

“Mediatonic have been around a long time and are very talented,” Steve Bailey, a senior games analyst at Omdia, told Business Insider. “Repeating this level of success will be difficult.” He added: “The question is, can they repeat this level of penetration into the market and user engagement? It’s difficult to do that. It’s very competitive. To have another ‘Fall Guys’ is like bottling lightning.”

Expanding “Fall Guys” to new platforms and keeping players engaged with new features and levels is a priority, but the incoming cash also frees Mediatonic and its parent, Tonic Games Group, to take more risks. Tonic Games’ other companies include the publishing arm Irregular Corporation and another studio, Fortitude Games.

“They all remain important,” Mediatonic’s Bailey said. “We want to incubate those over several years so they can become large businesses too.”

He added: “It’s been a stunning few weeks — it’s gone way beyond anybody’s forecasts. All our forecasts have slightly been thrown out of the window at the moment.”