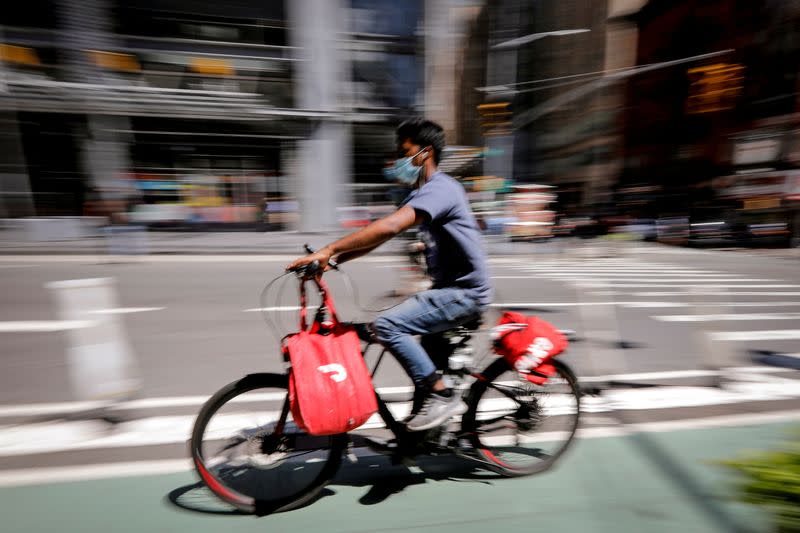 BERLIN (Reuters) – European food-ordering firm Just Eat Takeaway.com NV thinks GrubHub is better positioned than rivals to prosper in the United States even though it has been pushed into third place, its operating chief told Reuters.

The food delivery business has seen a land grab in the last year as companies vie for the market leading positions they say they need to keep customers coming back to their apps.

Netherlands-based Takeaway sealed the acquisition of Britain’s Just Eat, a company larger than itself, in January and the combined firm then agreed in June to buy U.S. peer GrubHub for $7.3 billion.

The GrubHub acquisition should be completed in the first half of 2021 and the company is well positioned to succeed, Just Eat Takeaway’s Chief Operating Officer Joerg Gerbig said in an interview in the company’s offices in Berlin.

“GrubHub is profitable. The largest market by far is New York. The company is particularly well represented on the East Coast,” Gerbig said.

Uber Technologies Inc, which had itself been eyeing GrubHub, said in July it would acquire Postmates Inc, giving it roughly a 30% share of the U.S. food delivery market, trailing DoorDash on some 45%, and leaving GrubHub in third place on 23%.

Just Eat Takeaway reported first-half revenue rose 44% to 1.03 billion euros ($1.22 billion) as the coronavirus lockdown led to a surge in orders, though its net loss rose to 158 million euros due to 152 million euros of acquisition-related costs.

Gerbig said the company puts a bigger focus on signing up restaurants which do their own deliveries than its rivals.

“If we just delivered the food ourselves, like other market players, we would never become profitable,” he said.

Gerbig does not expect the firm’s own deliveries to become profitable on the European mainland due to the high cost of drivers, but it is still worth doing because it attracts more restaurants, and therefore customers, to the platform.

He said the company had no plans to follow Delivery Hero and UberEats and expand into delivering everyday goods and groceries because they carry such low margins: “I wonder how you can ever make it profitable.”

Just Eat Takeaway is also looking to offload a minority stake it acquired along with Just Eat, in Brazil’s iFood: “If the right price is offered, we are ready to sell,” Gerbig said.

(Reporting by Nadine Schimroszik and Emma Thomasson;Editing by Elaine Hardcastle)