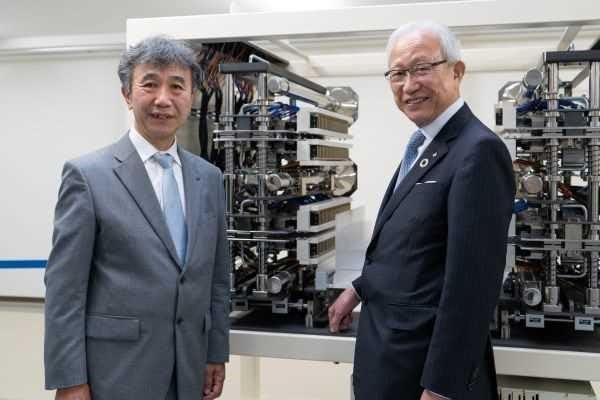 It’s been over 200 years since Italian Alessandro Volta invented the battery, but his invention is still evolving as an integral part of human life. We use batteries to power phones, computers, cars and even planes, but batteries are still evolving as a power source. The ultimate aim is to produce a power source that is cheap, lightweight, safe and environmentally friendly, and a number of Japanese small and medium enterprises (SMEs) have made breakthroughs in power-related technology.

Lithium-ion batteries are making a big contribution to creating a carbon-free society and are the energy solution of choice in modern appliances. They are lightweight and compact, and have a high storage capacity, which helps the utilization of renewable energy sources such as solar and wind power. When used in electric vehicles, they help reduce CO2 pollution. But all lithium-ion batteries must be made, tested and used with particular care. “Lithium-ion batteries are quite dangerous,” says Suita Masashi, a director of Kyoto-based Kataoka Corporation, which, as one of the world’s top manufacturers of rechargeable-battery testing systems, does its best to mitigate such dangers. “If you have a defective product and if you repeatedly charge and discharge it, it’s likely to end up exploding. What our equipment does is to ensure faulty products are discovered early on.”

“The test equipment plays a critical role in the safety and quality of the battery,” Kataoka President Kataoka Koji points out. Testing involves repeatedly charging and discharging the cell, and measuring the volume and consistency of electricity in the battery. Kataoka’s testing system is comprehensive and can carry out all necessary battery tests. This gives Kataoka its strength, as the system has an unmatched ability to accumulate and diagnose a large amount of data, such as the quality of the cell, its voltage and resistance. This accumulation of data plays an important role in creating a good battery and gives Kataoka a strong competitive edge over its rivals, whose systems might, for example, only test for voltage or resistance. “I think we’re probably the only company in the world that can produce such a complete and safe system that can perform all the required tests,” Kataoka says.

Kataoka has produced around 13,000 machines for battery manufacturers to test the safety and performance of their products, and the company supplies “all the major battery makers, both inside and outside Japan.”

Being based in northeastern Japan, the environment is something Material Concept CEO Koike Miho is concerned about. “This area was greatly affected by the 2011 earthquake,” she notes. “We really wanted to make a contribution to the area and believed our renewable energy research and technology would help the reconstruction efforts.” Material Concept, which works closely with Tohoku University, specializes in researching applications for copper paste – for example, as electrodes in solar panels, semiconductors, sensors and LED displays. “We were the first to come up with a product equal to silver paste in terms of conversion efficiency in solar cells,” says Koike, who notes that copper paste can be up to 10 times cheaper than silver paste, depending on the application, and doesn’t include lead. “It was our intention to never use materials that weren’t friendly to the environment.”

The use of copper boosts electrical and thermal conductivity, which means products can be made lighter, safer and more efficient, as tests are showing. “Electric vehicle manufacturers have told us they are seeing an energy saving of around 10%,” says Koike. “People worry about electric vehicles running out of power, so the less they have to worry about that, the more they are likely to use electric vehicles. That’s why helping EVs save energy is extremely important.”

Koike points out that other companies produce variants of copper paste but her company’s copper paste has achieved better results in terms of conductivity. “Our product has much lower resistance in comparison to those of other manufacturers,” she says. “The fact that there is much lower resistance means that a greater amount of electricity can be transmitted, which leads to saving energy.”

The rapid evolution of electric vehicles has presented Pacific Engineering Corporation with great opportunities and challenges. “You could say it’s given me a succession of headaches, but I see it as an opportunity,” says PEC President Ogawa Takahisa. Pacific Engineering manufactures more than 3 billion fuses a year and commands close to 50% of the global market for automotive fuses and 70% for high-voltage fuses in electric vehicles. Its head office is in central Japan, but the company also has manufacturing bases overseas, notably in Thailand and Mexico, which gives it greater access to the important Chinese and North American markets.

The transition from gas-powered cars to hybrids and electric vehicles has kept the company on its toes. PEC believes its comprehensive manufacturing process has helped its success. “One of the characteristics of our company is we do everything ourselves, whether it’s the stamping press, plastic molding or assembly,” Ogawa says.

PEC is constantly being asked to make its products smaller and lighter to save weight, which in turn saves energy and can reduce CO2 emissions. “We’ve always tried very hard to respond to the expectations of our customers and I think our success shows that we have been able to do that,” Ogawa says. While earlier car systems were less dependent on electrical parts and so required minimal voltage, the new wave of hybrids and EVs has seen voltage levels jump from around 270 to as much as 1,000 volts, requiring the rapid development of fuses to match this, but the company has the technical capacity to respond to different automotive developments and technological breakthroughs. Thanks to PEC’s extensive in-house research and testing facilities and “talented engineers, we have been able to gain the trust of our customers,” Ogawa says. “We spent about 1.5 billion yen ($14 million) on our testing facility and I don’t think our rivals have anything comparable. We have an absolute determination to guarantee both safety and quality, and I think that’s probably the difference between our company and others.”

At a G20 ministerial meeting last year on “energy transitions and global environment,” a statement was issued agreeing on the need “to develop and deploy affordable, reliable, sustainable, and low GHG [greenhouse gas] emissions energy systems, and to achieve a cleaner, more resilient and sustainable future.” The statement also acknowledged “the role of startups and Small and Medium Enterprises (SMEs) in promoting energy transitions.” PEC’s Ogawa says that businesses have an important social role to play: “Paying attention to the environment is something we must do as a company.”

Note: All Japanese names in this advertorial are given in the traditional format, with the family name preceding the given name.