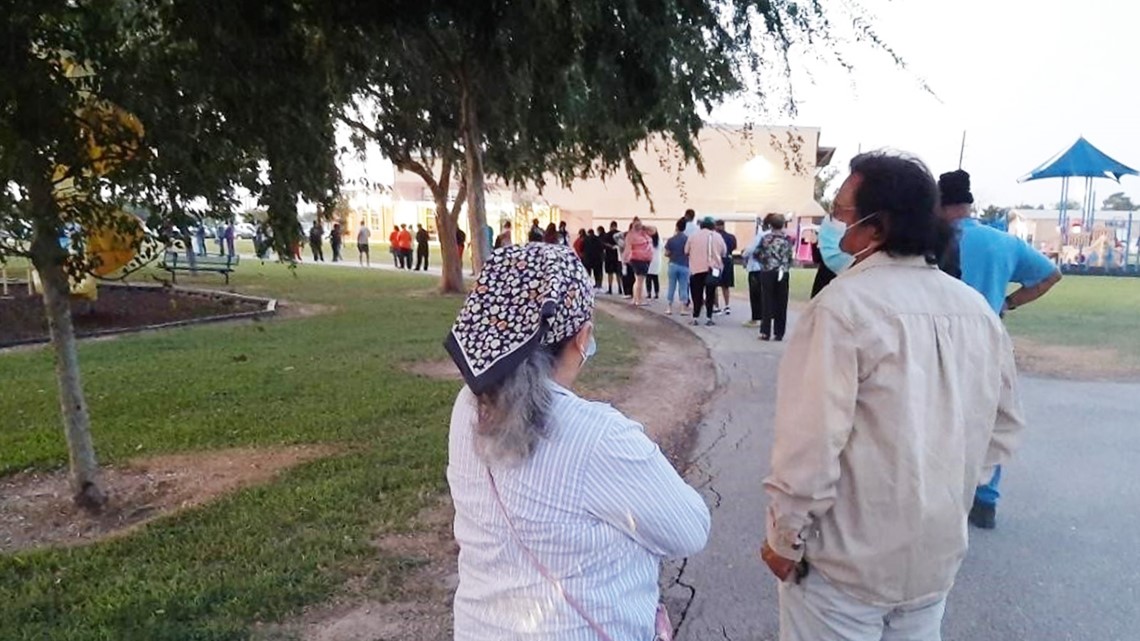 Some voters waited as long as seven hours to cast their ballots because the machines were programmed with the wrong start date.

FORT BEND COUNTY, Texas — The lines are long for early voting at every polling location in Fort Bend County early Tuesday, but it’s not just because of the increased turnout.

County officials are working to fix a technical glitch that prevented the polls from opening at their scheduled time of 8 a.m.

County leaders said the machines didn’t have today’s date programmed so they wouldn’t work when the polls opened.

“They were not programmed to start this morning. And that had to be reprogrammed,” Fort Bend County District Attorney Brian Middleton said.

He said they are investigating whether it was intentional, but said it could be because they’re using “state-of-the-art machines” for only the second time.

The delays came on the first day of early voting.

“I was extremely disappointed with the technical issues,” In a tweet just after 9 a.m., County Judge KP George. “Those who are responsible will be held accountable. In an era voter where suppression is real, I will authorize a full investigation and call for accountability.”

INTERACTIVE MAP: Where you can vote early in Fort Bend County

Many voters from Sugar Land to Missouri City told KHOU 11 they lined up extra early to vote and stood in line for nearly two hours before being told the polls were not opening on time.

My friend Marlon in Fort Bend county just waited 7 HOURS in line to vote due to avoidable technical errors that forced many to leave before casting their ballots. Join me in supporting Fort Bend county judge @JudgeKPGeorge’s effort to extend voting hours to make up for lost time. pic.twitter.com/P1BPs9P7ag

Beto O’Rourke tweeted photos of an elderly man with a walker who waited in line for seven hours to vote.

Others said they would wait all night if they had to.

“I think it’s kind of embarrassing for the county to have people out here for so long. This is a huge election for a lot of people,” said 19-year-old Akash Karaman, who was voting for the first time and missed class because of the delays. “This is a disheartening experience as a first-time voter.”

Voter Doris Kung said she was “surprised and disappointed,” but came prepared with a book and a hat to block the sun.

“I’m just going to give them grace and let it just be,” Kung said.

All machines were programmed to turn on Oct. 19th, instead of today.

Then a D.A. confirmed a 2nd mystery glitch at 4 of the 30 locations.

Listen to a 19-year old talk about his first-ever experience voting. #khou11 pic.twitter.com/dPjdqV7ALj

At a later news conference, George apologized to voters but said he had nothing to do with the issue. He urged residents who left without voting to try again.

“Remember, people have died for our right to vote. Stay in line or come back at a convenient time – the future of our country depends on us,” George tweeted.

I am extremely disappointed with the technical glitches that riddled Fort Bend County Election machines this morning. Those who are responsible will be held accountable. In an era voter where suppression is real, I will authorize a full investigation and call for accountability. pic.twitter.com/ZD5Hf2y37D

Voting underway in Fort Bend County at one location

Just after 11 a.m., the judge tweeted that the county’s largest voting location was now online and replied to one follower that lines were short there:

“The largest voting site in Fort Bend at Smart Financial Mega Center is up & fully operational. I thank each and every #VOTER for #VOTING. #Election2020”

The status of other polling locations in Fort Bend was not immediately confirmed.

Earlier in the morning, voters turned to Twitter to express their frustrations:

“Those who are in line should be given a written slip that when the machines are up and running they can come back and go to the head of the line anytime between now and Oct.30th. Only fair thing to do now,” one voter responded to the judge.

“The system is STILL DOWN!  We need answers today!!!!!” another person tweeted back to the judge just before 9:30 a.m.