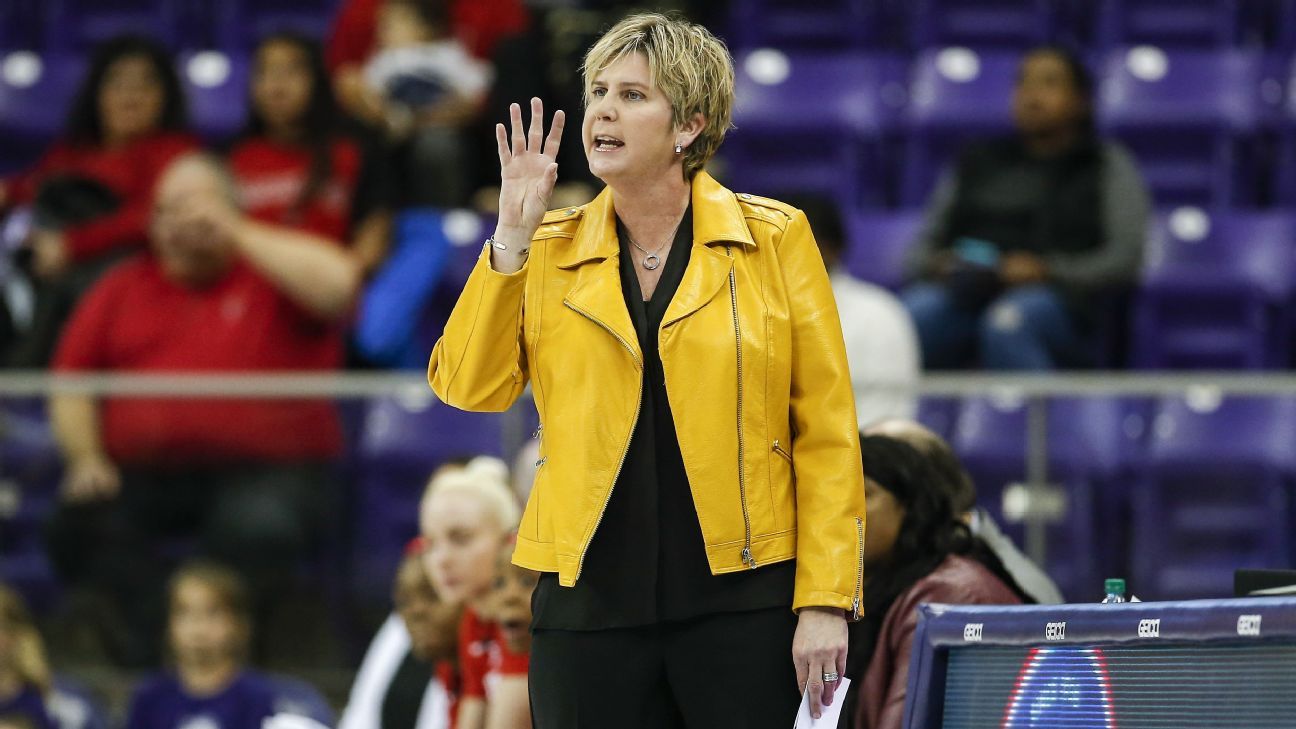 Former Texas Tech women’s basketball coach Marlene Stollings believes she was fired without cause in August and has retained attorney Peter Ginsberg to pursue litigation against the school.

This week, Ginsberg sent a letter to Texas Tech vice chancellor and general counsel Eric Bentley regarding the preservation of all documents and electronically stored information regarding Stollings’ firing.

Stollings, 45, had four years remaining on her contract when she was dismissed — years for which she would not be paid if it’s determined she was fired for cause, as the school believes. Stollings told ESPN in a recent interview that she wants to clear her reputation.

“It is my goal to coach again,” Stollings said. “I knew I wanted to coach since I was in middle school. I’ve worked diligently to do it the right way.”

Stollings, who went 32-28 in two seasons at Texas Tech, was dismissed Aug. 6, the day after an extensive article in USA Today alleged an abusive and toxic environment in her program.

Stollings said there was nothing in the article that was previously unknown to Texas Tech athletic director Kirby Hocutt. He told USA Today for its story that the school had taken “appropriate steps to improve the relationship and communication between coaches and student-athletes” and indicated Stollings would stay in her position.

Stollings said Hocutt continued to assure her of that even after the article’s publication on Aug. 5, and added that she was shocked when he did an about-face a few hours later. He then met with the Texas Tech players that day and the next, before firing Stollings. Hocutt said on a videoconference call Aug. 7 that the school had failed the players and “we’re going to get this right.”

Stollings — who previously was head coach at Winthrop, VCU and Minnesota — said she provided a school-approved statement to USA Today for its article. But now she thinks she didn’t do enough to defend herself, instead relying on Hocutt’s assurance that the school was standing behind her.

“I believed what Kirby was telling me: That we were moving ahead, and if improvements had to be made, they would be made,” said Stollings, who added that she had been allowed to hire a new assistant coach in July.

“Does that mean I trusted him too much? I think now we can say apparently so.”

The four players who agreed to be named — Mia Castaneda, Erin DeGrate, Marcella Lamark and Emma Merriweather — transferred from Texas Tech in 2019. They also had transferred before coming to Texas Tech; Castaneda and Lamark from junior colleges, DeGrate from Louisville, and Merriweather from Long Beach State. Lamark and Merriweather never actually played for Texas Tech, sitting out the 2018-19 season and then receiving eligibility waivers from the NCAA to play elsewhere in 2019-20. DeGrate (Baylor) and Castaneda (Washburn) finished their college careers this past season, while Lamark is now a senior at Pittsburgh and Merriweather a junior at Kansas.

In all, 12 players left Texas Tech during Stollings’ two-year stay in Lubbock, Texas — eight after her first season and four after the second. She said that in taking over a program that went 7-23 overall and 1-17 in the Big 12 in 2017-18, she needed to make massive changes. She said Texas Tech’s administration was “very clear on what the program was lacking” when she came in.

“Which included level of fitness, accountability, work ethic,” Stollings said. “Even (Big 12 commissioner) Bob Bowlsby called me before I took the job and told me that the program had really fallen and wanted me to try to get it back to the standard it once was.

One of Stollings’ former players from Minnesota, Annalese Lamke, and one from VCU, Shekinah Henry, posted tweets the week the USA Today story came out voicing that they felt they had experienced similar abuse in her programs at those schools.

“Unfortunately, these type of incidents weren’t just isolated to Texas Tech,” Lamke said in her tweet. “Administrators must do a better job researching who they are hiring to protect their athletes! Winning doesn’t make a good coach.”

On the Aug. 7 video call, Hocutt told the media that his discussions with Texas Tech players Aug. 5-6 convinced him that a coaching change had to happen. Patrick Adams, the father of Texas Tech senior guard Andrayah Adams, told ESPN this week that his daughter told him that while players had asked for some changes in the program, she and others did not want Stollings removed from her position. He said his daughter had benefited from the discipline Stollings instilled, and felt that she improved in her system.

“My daughter is still hurt, and still trying to figure out how to move forward,” Adams said. “Because Coach Stollings was her coach, and that was who she wanted to play for. We trusted Coach Stollings 110 percent with our child. And still feel that way.”

Stollings took over the program in 2018, and the Lady Raiders had their best record, 18-11, since 2013 this past season. But in March, the program’s strength and conditioning coach, Ralph Petrella, resigned after players accused him of sexual harassment, prompting a Title IX investigation. He has denied any misconduct.

Stollings, who had worked previously with Petrella at Minnesota and VCU, said she reported him as soon as she was made aware of the allegations in March, although some players told USA Today they had complained about his behavior before that.

“I was first alerted to it shortly after our season ended, and it was on a call with an athlete,” Stollings said of Petrella. “I immediately contacted my supervisor, which is Judi Henry. She instructed me to contact our A.D., Kirby, and within 48 hours, (Petrella) was no longer an employee at Texas Tech.”

Texas Tech then did an internal review of the women’s basketball program in the wake of Petrella’s resignation and other concerns, including the players’ exit interviews. That review was presented to Hocutt verbally. When asked why there was no written report, Hocutt said in his Aug. 7 conference call that the investigation was taking a long time and he was getting impatient with it, so he requested to hear it verbally. Stollings said that Hocutt told her that he didn’t want a written report that could be available to media under an open records request.

Following the interview with Stollings, ESPN provided Texas Tech a list of questions for Hocutt in regard to her claims. The school — which reportedly is doing a comprehensive program review in the wake of Stollings being fired — did not answer the questions but released a statement instead.

“I addressed the issues surrounding our women’s basketball program at a public press conference, and I’d refer you to those remarks,” Hocutt said in the statement. “In making the decision about the future of our program, we took into consideration the entire situation. We made the right decision in changing leadership, and it was the best choice for our student-athletes and our program. We are excited for our new coach, Krista Gerlich, and we are looking forward towards the future of the Lady Raider basketball program.”

Then Thursday afternoon, Texas Tech released 310 pages of documents as part of an open records request. They included what was termed on June 10 as a “rough work in progress” draft of the internal review, which was eight pages long and touched on topics such as team culture, mental and physical health issues, interpersonal relationships with the coach, and two Title IX-related issues.

One of the Title IX issues was in relation to the complaints made about Petrella. The other involved a player who transferred in 2019 saying that she had received “no sympathy” while dealing with what she termed an abusive romantic relationship.

The draft said interviews with some former players described an atmosphere that was “hostile, lacking trust, terrifying and manipulating,” but it did not contain many specific examples.

Also included in the released documents Thursday was a “talking points” memo for the review team dated June 23. It referenced the allegations against Petrella, saying no players said that they had told Stollings and assistant coach Nikita Lowry Dawkins about their issues with him. The review team questioned whether that was because they didn’t feel comfortable going to the coaches.

The USA Today story focused on other allegations that players said created an abusive atmosphere under Stollings.

One allegation was that the athletic performance system that monitored players’ heart rates was being used in a punitive fashion by Stollings and her staff, with players feeling enormous stress to meet heart-rate standards they felt were unreasonable.

Stollings said she had also used the system at previous schools and that it gave staff members a way to give non-subjective feedback to players about their fitness and effort levels. She said no Texas Tech players told her the system was causing them serious emotional distress, as some told USA Today.

Still, she had agreed in July in discussions with Hocutt to discontinue the use of the system for this coming season and see how the players responded. Players also alleged in the USA Today story that demeaning language, including the words “disgusting,” “trash” and “fat pig,” was used in body-shaming them by Petrella and others on the staff.

Stollings said there was one incident during her first season involving a complaint about something Petrella was alleged to have said. Stollings said she looked into that, and then there were no additional complaints about him until the sexual harassment allegation she reported in March. Stollings also disputed the claim in the USA Today story that she had taken away Merriweather’s dog because the pet would “distract her from basketball.” Stollings said Merriweather’s roommate, who was also a Texas Tech player, was allergic to dogs and had asked the coach to intervene.

Also, Stollings disputed a claim in USA Today that she held tougher practices after players spoke to athletic department officials about their concerns. Stollings said she has open practices that anyone can come watch, plus she had each practice filmed.

Longtime former Texas Tech coach Marsha Sharp, who moved into an administrative role with the team after the 2006 season, said she attended three practices this past season and did not witness any problems with the program. She said she had been informed by Texas Tech officials during the review process earlier this year that there were no serious issues anticipated for Stollings.

“I had been told the review showed no red flags, or even yellow flags,” Sharp said.

Stollings said the overall evaluation of her program as “toxic” was especially concerning to her.

“I take tremendous pride in the way I go about developing our student-athletes mentally, physically and socially,” Stollings said. “It is my life’s passion. I absolutely refuse the word toxic, put in any way, appropriately described this program.”