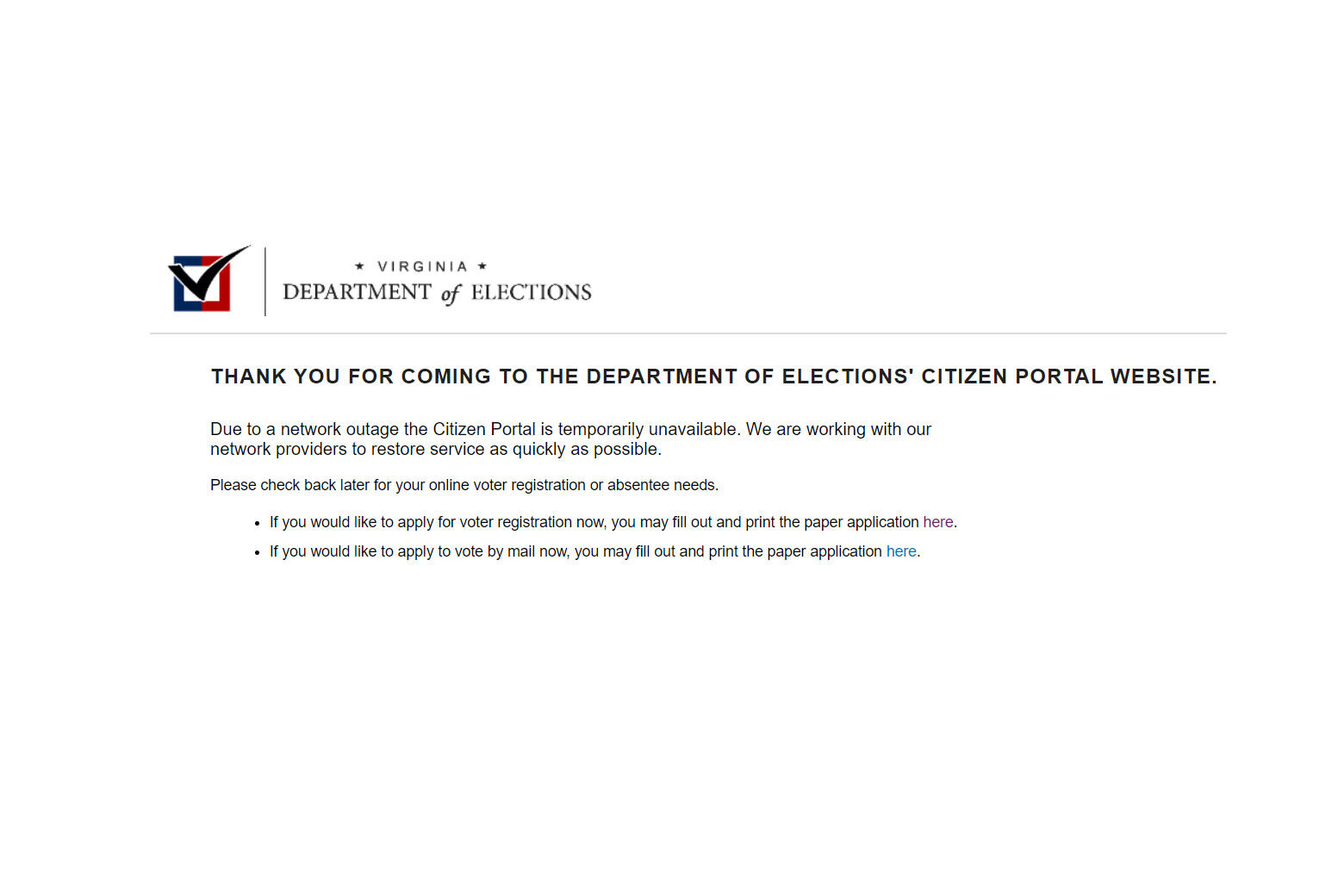 The massive outage, which lasted for several hours Tuesday, came on the final day of voter registration ahead of the 2020 presidential election. The glitch hobbled the Virginia Department of Elections’ online citizens portal, and local registrars’ offices across Virginia were also hit with connectivity issues, the department said.

Virginia Gov. Ralph Northam said he is exploring all options to extend the voter registration deadline after the state’s online registration portal was knocked offline Tuesday when a fiber cable was inadvertently cut during roadwork.

The massive outage, which lasted for several hours Tuesday, came on the final day of voter registration ahead of the 2020 presidential election. The glitch hobbled the Virginia Department of Elections’ online citizens portal, and local registrars’ offices across Virginia were also hit with connectivity issues, the department said.

As of 3:30 p.m., the website was back up, the department announced on Twitter. Virginia residents have until 11:59 p.m. Tuesday to register to vote online using the system.

Before the outage was fixed, there were growing calls to extend Virginia’s voter registration deadline.

Northam said during a news conference Tuesday afternoon he doesn’t have the legal authority to extend the voter registration deadline, which is mandated by Virginia law, but that he supports a court-ordered extension of the deadline.

The Virginia Information Technologies Agency said in a statement earlier Tuesday the fiber cable was inadvertently struck early Tuesday morning during a roadside utilities project off Route 10 in Chester, Virginia, south of Richmond. The fiber cable, owned by Verizon, is located near a state-owned data center in Chesterfield County.

Crews had been working all day to repair the cut fiber.

Virginia Secretary of Administration Keyanna Conner said Tuesday afternoon crews were working on a temporary solution to bring systems back online, while Verizon crews would continue to work on a permanent repair to the cable.

Conner said the cut occurred on a 10-gigabyte circuit that had been installed in the spring to handle increased workloads from the shift to remote work during the COVID-19 pandemic. Conner said the state does have backups, but they were overwhelmed Tuesday by high-demand, which cause web applications to slow.

This isn’t the first time Virginia’s online systems have crashed on the crucial final day of registration.

In 2016, thousands of Virginians attempting to register to vote by the deadline overwhelmed the online system causing it to crash.

Prompted by a federal lawsuit, a judge later extended the registration deadline by a day and a half to give people who were locked out of the system more time to register.

There were growing calls for the registration deadline this year to be extended. In a statement, a trio of House Democrats from Northern Virginia — Reps. Don Beyer, Gerry Connolly and Jennifer Wexton — called for a court order to push back the deadline by 72 hours — three days.

“The shutdown of Virginia’s online voter registration threatens to prevent many Virginians from casting their ballots in the 2020 election. … It is imperative that the deadline for Virginians to register to vote be extended,” the statement from the lawmakers said. “We hope the courts will swiftly grant such an extension, and we hope they will take into account the disruptions to registration that have already occurred and the time that it will take to inform the public about new opportunities to register.”

Earlier Tuesday, Virginia’s Lt. Gov. Justin Fairfax said on Twitter he was calling for this year’s registration deadline to be extended because of the outage.

Citing legal procedures, Rita Davis, the governor’s legal counsel, suggested the Northam administration couldn’t file a lawsuit itself to extend the deadline but would support such a lawsuit filed by a citizen plaintiff.

After the election site was restored, Virginia Attorney General Mark Herring hinted he would take legal action to extend the deadline.

“I share Virginians’ deep concerns about the registration system outage,” Herring said in a tweet. “I’ve always taken action to ensure you can safely cast your ballot in-person or by mail and to ensure your vote will count, and we are approaching this situation in exactly the same way. Stay tuned.

Loudoun board of election: ‘Wrong time’ for this to happen

Local election boards said they were able to carry on some activities during the outage, including early voting.

“Everything else has come to a stop,” he said.

“Unfortunately, I’ve got 300 staff sitting around here waiting to mail out absentee ballots and process registration applications who really can’t do anything,” he said.

In neighboring Loudoun County, director of elections Judy Brown said early voting also carried on through the outage and there were no delays.

However, election staff members were unable to print labels to mail ballots to voters or process voter registrations that had previously come in, she said.

“It is the wrong time of year for this to have happened,” Brown said.

In Prince William County, Virginia, local election officials said in a statement that it was also using a workaround to keep early voting continuing even with the state website down. The local office reminded voters that paper applications must be postmarked by Oct. 13 or voters can drop off their filled-out registration applications at one of the county’s three early voting sites by 5 p.m. Tuesday.

Some areas had reported problems with early voting during the outage. In Albemarle County, Virginia, which includes Charlottesville, the board of elections said it could not check in early voters said they would have to cast a provisional ballot. Later, the county said election staff had found a workaround so voters could successfully cast their ballots.