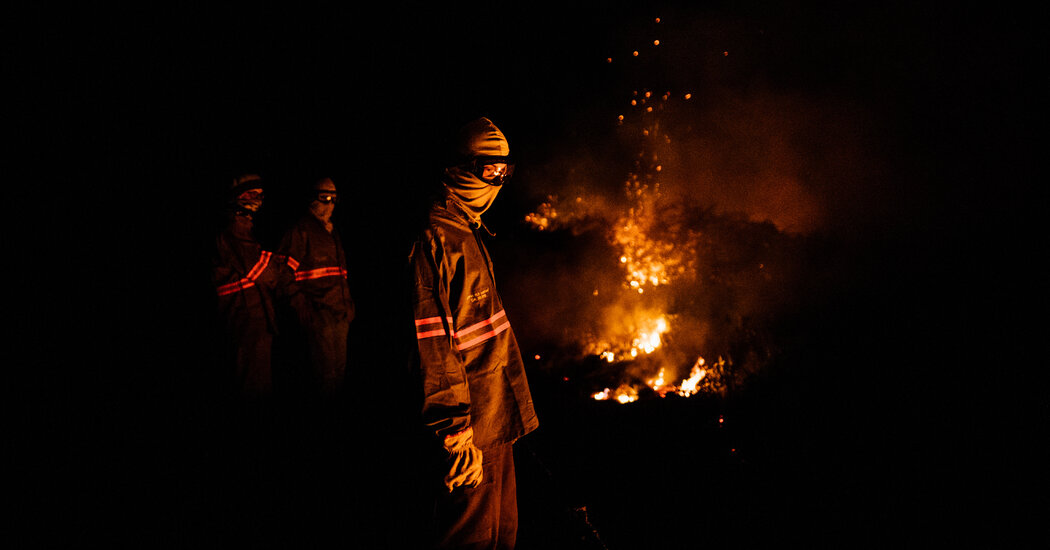 PORTO JOFRE, Brazil — A record amount of the world’s largest tropical wetland has been lost to the fires sweeping Brazil this year, scientists said, devastating a delicate ecosystem that is one of the most biologically diverse habitats on the planet.

The enormous fires — often set by ranchers and farmers to clear land, but exacerbated by unusually dry conditions in recent weeks — have engulfed more than 10 percent of the Brazilian wetlands, known as the Pantanal, exacting a toll scientists call “unprecedented.”

The fires in the Pantanal, in southwest Brazil, raged across an estimated 7,861 square miles between January and August, according to an analysis conducted by NASA for The New York Times, based on a new system to track fires in real time using satellite data. That’s an area slightly larger than New Jersey.

The previous record was in 2005, when approximately 4,608 square miles burned in the biome during the same period.

And to the north, the fires in the Brazilian Amazon — many of them also deliberately set for commercial clearing — have been ruinous as well. The amount of Brazilian rainforest lost to fires in 2020 has been similar to the scale of the destruction last year, when the problem drew global condemnation and added to the strains between Brazil and its trading partners, particularly in Europe.

The enormous scale of the fires in the Amazon and the Pantanal, several of which were visible to astronauts in space, has drawn less attention in a year overwhelmed by the coronavirus pandemic, the protests over police brutality and the coming American election.

But experts called this year’s blazes in the Pantanal a particularly jarring loss and the latest ecological crisis that has unfolded on the watch of President Jair Bolsonaro, whose policies have prioritized economic development over environmental protections.

“The fires in the Pantanal this year are really unprecedented,” said Douglas C. Morton, the chief of the Biospheric Sciences Laboratory at the NASA Goddard Space Flight Center, who has studied fires and agricultural activity in South America for two decades. “It’s a massive area.”

Mr. Bolsonaro, who often makes assertions that are false, said some of the fires detected by satellites were likely campfires.

Owners of soy fields and cattle ranches — which, along with tourism, are the main economic engines in the Pantanal — set fires on their lands during July and August, when the water level ebbs. This year, several of those fires skipped over traditional barriers like roads and streams, powered by strong winds.

“Years back we faced large fires here, but nothing like this,” said Manuel Costa, a park ranger who was part of a team trying to limit the spread of a blaze in a natural reserve in the Pantanal. “These fires are almost impossible to fight.”

During the wet season from October to March, most of the Pantanal region floods with water that otherwise might overwhelm populations downstream. As the Pantanal dries from April to September, it provides a much-needed source of water for those same populations.

But the Pantanal, like much of Brazil, has been mired in drought this year, with below-normal rainfall and near-record temperatures during the wet season.

While the extent of climate change’s influence on the current drought is unclear, researchers say drought in the region can be triggered by warm surface temperatures in the North Atlantic and North Pacific oceans. As these oceans continue to warm in coming decades, the researchers expect more periods of extreme dryness in the Pantanal.

Last year’s fires in the Amazon incited a major backlash against Brazil, which continues to face boycott threats and the potential unraveling of a trade deal with the European Union over Mr. Bolsonaro’s environmental record.

Seeking to burnish its image, the government in July declared a 120-day prohibition on fires in the Amazon and the Pantanal. It also launched a military operation to prevent commercial deforestation, which is the leading cause of fires in Brazil.

But experts said those measures have served mainly to manage a public relations crisis and have done little to strengthen conservation efforts.

“There’s a sense that environmental laws can be ignored with impunity,” said Ane Alencar, the science director at the Amazon Environmental Research Institute in Brazil. “That’s largely a result of how the government has been handling these issues.”

Mr. Bolsonaro campaigned in 2018 on a promise to make it easier for miners, loggers and farmers to gain access to protected rainforest and other biomes. He has called environmental fines an irksome “industry” that got in the way of economic development.

On Thursday, during a weekly live broadcast he does on Facebook, the president lashed out at nongovernment organizations that promote conservation, calling them a “cancer” he has not managed to “kill off.”

His vice president, Hamilton Mourão, a former army general who has overseen the government’s military operation in the Amazon this year, has struck a more contrite tone, particularly with the foreign news media and investors.

In a recent interview, Mr. Mourão said that deploying the armed forces to fight deforestation was necessary at a time when fiscal constraints have hobbled the government agencies that enforce environmental laws.

“We have to wage a constant battle to prevent illegality from taking root,” Mr. Mourão said.

Experts say the government’s efforts have fallen short because it has failed to prosecute the leaders of the organizations driving deforestation. The government has also been largely unable to enforce regulations in protected areas and has struggled to collect the environmental fines that are issued.

Last year, the fires in the Amazon razed about 28,000 square miles of tree cover, a 10-year high. Government scientists say satellite glitches have prevented them from arriving at a comprehensive estimate for the first six months of this year.

A scientist at Brazil’s National Institute for Space Research, the government agency that tracks deforestation and fires, told Reuters this week that when data is downloaded from the satellites, the agency experts expect to find that this year’s fire season in the Amazon was about as destructive as last year’s, if not more. The preliminary analysis shows more than 13,200 square miles of tree cover in the Amazon burned this year.

Mr. Morton, the NASA scientist, said the 120-day moratorium on fires appears to have been widely ignored.

“Most fires we’ve seen in 2020 were started after the moratorium went into effect,” he said.

Across the Pantanal, firefighters, local tourism professionals and volunteers have banded together to help firefighters combat the fires, a herculean task that has often felt hopeless as the density of smoke in the air makes it impossible to douse the flames from aircraft.

“We received calls from people in tears asking for help to combat fire on their property, but we couldn’t do anything,” Lt. Col. Jean Oliveira, a firefighter in Mato Grosso state, told firefighters during a daily meeting at the command base. “Fighting forest fires is really like war, and every day is a battle.”

Ailton Lara, the owner of one of the lodges in the area that caters to tourists who come to the Pantanal to see wildlife, said he despairs to think of the toll that the fires will take on animals and plants in the area — and to his livelihood.

“We need to look at the root of the problem,” he said. “What is happening now is a warning, and the question is what we will have learned from all of this.”