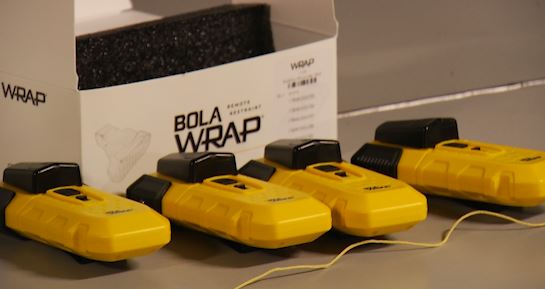 BEAUFORT, SC (WSAV) – The spotlight is on local police every day, everyone watching how they interact with suspects.

Now one Lowcountry department believes it has found a new, safer way to trip up a criminal before he can strike again.

One shot one suspect. Or in this case a mannequin wrapped up tight with no place to go.

That is the goal of Bolawrap, a new device purchased by Beaufort Police for its officers.

“It fills a niche. there’s not been a solution like this,” said Captain George Erdel of the Beaufort Police Department.

It is a remote handheld restaining device, bright yellow so its easy to see, with a cartridge inside that shoot out a rope with sharp edges on it.

The officer points and shoots, wrapping a line around the suspect’s legs or arms.

The sharp edges stick and tighten when the suspect moves. Making it tougher, if not impossible to walk, or get to an officer who could still be 15-20 feet away.

“It allows officers to restrain a suspect from a distance where they don’t have to be on top of someone to do so,” said David Pritchard, Master Instructor for Bolawrap.

“Ideally this would be a solution that would prevent us from having to go to that level. So it doesn’t cause pain, it allows that standoff distance, it immobilizes somebody so it’s just a whole lot safer,” said Cpt. Erdel.

“Law enforcement needs a tool where they can get these people under control where they aren’t a danger to themselves or anyone else,” says Pritchard.

Its an alternative to a taser and the department hopes a better way to stop people with mental or physical health issues without injuring them.

“Even though they may be in a medical crisis they can be violent they can be dangerous,” says Pritchard. This allows officers to have something to restrain them without using something that may cause them unnecessary injury.”

“Ideally this would be a solution that would prevent us from having to go to that level,” explains Erdel. “So it doesn’t cause pain, it allows that standoff distance, it immobilizes somebody so it is just a whole lot safer.”

Giving officers another tool in their toolbelt. One that may put the wraps on the suspect and allow everyone to get home safely.

“So if we can intervene in some of these situations because it escalates into the need for one of those kinetic options like a taser, like a baton. So why would we not do that obviously,” said Erdel.

Beaufort Mayor Billy Keyserling and several council people were on hand for Wednesday’s demonstration. The City has purchased 5 of the devices and Bolawrap ammunition at a cost of about $5000.

Once officers are properly trained and the equipment verified, the Bolawrap devices will be on the streets.