Last week was the 25th anniversary of the biggest and most critical launch in computing history. Steve Jobs was on a forced hiatus after being fired from Apple, and that platform wasn’t doing well. OS/2 the supposed successor to DOS/Windows, wasn’t selling well either, and DOS/Windows was way out-of-date and aging poorly.

Then Windows 95 was promised and the year running up to the launch was a fantastic mix of media showcases, previews, speculation and excitement. From the standpoint of lines and demand, nothing that preceded the product even came close, and even after the launch, only Apple has been able to drive the same level of excitement — but not for an operating system, only for complete hardware.

The launch year was an essential point in the history of the PC that changed the market forever. It also made my career for which I’m eternally grateful. Let’s talk about Windows 95 this week, and we’ll close with my product of the week — the Slim 7 Laptop from Lenovo. This laptop showcases just how far Windows has come since Windows 95.

In many ways, Windows 95 was massively overhyped, but it showcased what an adequate marketing budget for a revolutionary product could do concerning demand generation. As the dedicated operating system analyst for Dataquest, and the designated launch analyst for Windows 95, I was at the center of that storm.

To say I was a fan would have been an understatement. I’d recently left IBM to join Dataquest and had relatively intimate knowledge of what a train wreck the pre-Windows 95 segment was. Paul Cubbage, my partner in the service, had developed an advanced forecasting capability. With my IBM sourced research knowledge, we were able to build the first five-year operating system forecast, which suggested accurately that by the end of the decade, UNIX, macOS, Netware, and OS/2 would go into decline or be gone.

I’d been trained as a news anchor for a canceled tech show earlier and finally got to use that training in a daily news segment on tech for the local TV station in Silicon Valley. This appearance later led to a permanent spot on a syndicated personal technology TV show. I did my first PC build from parts, even though back then the market wasn’t yet set up for personal PC builds; the case and motherboard I used didn’t work together, so the motherboard was on little rubber feet and placed loosely in the case.

I ran the beta in production for most of the launch year and was impressed with the product’s relative reliability and improved ease of use. The launch itself was magical, and I was on the Microsoft Redmond campus to see it. Even the sky was a perfect match to the cloud covered box.

It was also one of two times that Bill Gates personally stepped in and saved my butt. First by writing a commendation letter for telling him about a significant problem that otherwise would have ended in me being fired. The second time for killing a stupid commercial. During the filming of the commercial, they had me spinning (and motion sick) on a carousel while answering inane questions about how Windows 95 affected my sex life.

On this last, this was before green screens and CGI, and they wanted the clouds to move behind me, so they were a stationary picture, and I spun around beneath it while people yelled stupid surprise questions to me on the fly and taped my responses. I’d spent four years acting but was ill-prepared for this insanity, and fortunately, Bill stepped in, called it stupid, and pulled the plug. I later saw the tape, and I looked like I was on drugs. I wasn’t, but the bright lights, distractions in the room, motion sickness, and inane questions didn’t reflect well on my image.

While the launch was one for the record books, the initial Windows 95 experience was a showcase on what not to do. The hardware in the market and in use went back nearly a decade, and controls over drivers and quality had been nearly non-existent. Microsoft had made a last-minute change, pulling out a critical feature that had a lot of dependencies, so the final released product was far less reliable than the last beta had been.

On top of that, the massive diversity in hardware and lack of quality control in drivers, coupled with a multimillion-user initial group of customers eager to upgrade, resulted in a disaster. Microsoft support was criticized for epic-level wait times, so they busied out the phone lines. This decision gave them no insight into just how bad the breakage was and drove folks that were huge fans into becoming equally full-throated critics.

Rather than doing a scientific review of what worked and what didn’t, in what appeared to be a very creative way to avoid blame, those driving the problems got the company to conclude that the real issue was excess demand.

This pivot turned the very successful launch into the designated cause for the subsequent problems, and Microsoft never again put this kind of effort into a product launch. Steve Jobs, on the other hand, pretty much copied much of what Microsoft had done successfully, and eventually created similar demand for the iPod, and especially the iPhone.

Over the years that followed, Microsoft addressed each one of the problems, and 20 years later, with the launch of Windows 10, it finally had a product that could live up to the promise of Windows 95. Even security had been mainly sorted, and the OS now runs for weeks without needing a reboot. Crashes are rare, and automatic backups in Microsoft 365 reduce the pain substantially when they do happen. Hardware is improved as well. Instead of the ugly beige desktops and lumpy portable PCs, we have sleek laptops and sexy desktop PCs.

As we move to the cloud (and Microsoft is leading here with their Azure efforts) for a future hybrid desktop product that will deliver performance, flexibility, and increasing AI capability that we could only dream of back in 1995 — it’s good to look back and remember that we would never have gotten here if it wasn’t for Windows 95.

Happy Anniversary, Windows 95! Thanks for setting the bar that stood for 25 years that your children successfully eventually achieved.

One of the things Windows 95 opened up for us is choice, lots and lots of choices. Compared to the Apple model, which was based on an IBM model (lock-in) that IBM doesn’t even use anymore, the level of choice is enormous. One of those choices is between processor providers, and both AMD and Qualcomm have provided options that, for the right buyer, can be better than the many options that Intel also supports.

Up until recently, AMD was the low-cost / low-performance default option for those that didn’t have enough money for a top-flight machine. But recently AMD has become a peer to Intel, and this Lenovo IdeaPad Slim 7 showcases that AMD not only can compete with Intel, it can overshadow its more prominent and more powerful competitor.

At a time when there is a shortage of laptops that provide the breadth of capabilities to someone working from home that wants both work and entertainment features, this laptop stands out as a champion.

In testing, this laptop has performed in line with much heavier and more expensive laptops from competitors, making it a true segment champ for those who want excellent performance, an affordable price, and light carry weight. 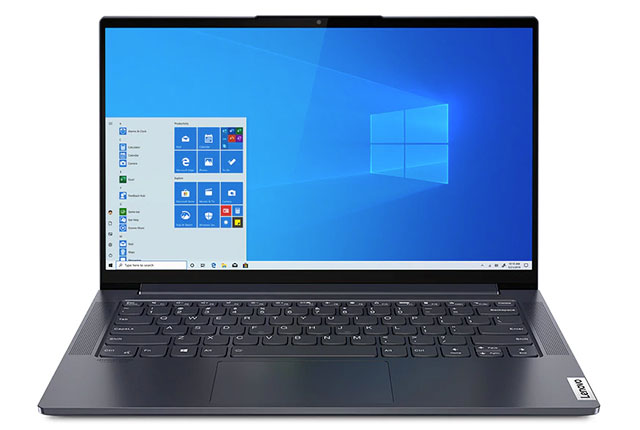 Available in any color you want, as long as that color is Slate Gray, this 3.08-pound product is a tech showcase with Atmos audio, IR (Microsoft Hello) camera, up to 17.5 hours of battery life with rapid charging capability, 8 GB of memory, a 300 nit 14-inch display, 802.11 AX WiFi, Radeon Graphics, a 256 GB SSD, and a full port out (Thunderbolt, USB-C charging, SD card reader, HDMI, and a headphone / mic combo jack). It even has a fingerprint reader.

Priced at US$899.99, the IdeaPad Slim 7 falls toward the middle of mid-range laptops, but provides performance that more expensive gaming machines would like to have.

Thanks to the pandemic, many of us are living on our laptops. This one is incredibly easy to live with, and it is easily the best AMD laptop I’ve ever used; and because it hits well above its mid-range class, Lenovo’s IdeaPad Slim 7 is my product of the week.