The Honda Pilot is a well-established name in midsize family SUVs, and the Hyundai Palisade is a relatively new competitor. These SUVs have many of the same strengths, like spacious interiors, strong standard V6 engines, and good standard safety features, but there are some differences to know before making your purchase.

Let’s take a closer look at these 3-row SUVs and find the right one for your family.

The Honda Pilot is one of the oldest and most trusted names in 3-row family SUVs. It has minivan-like practicality in the form of an SUV with available all-wheel drive (AWD). This is a well-rounded SUV, but it hasn’t received a complete redesign since 2016, and it’s showing its age compared to some of its more modern rivals. View listings near you

Roomy interior: Both SUVs have spacious interiors with standard 3-row seating, but the Pilot has slightly more legroom in the third row. If you’re going to be using the third row regularly, your passengers will appreciate the extra space. The Pilot also has a generous cargo hold, adding to its family friendliness.

Rugged TrailSport model: The new TrailSport model has joined the Honda Pilot lineup for 2022. It’s the most rugged and off-road-ready trim in the Pilot lineup, having more ground clearance, rugged-style tires, and an adventurous appearance package inside and out. Other perks include navigation, a hands-free power liftgate, and wireless charging.

Strong and efficient V6: The Pilot and the Palisade come standard with a V6 engine. They have similar horsepower and torque ratings, but the Pilot is a little more fuel-efficient. The Pilot gets a combined fuel economy rating of up to 23 mpg with front-wheel drive (FWD) and 22 mpg with all-wheel drive (AWD). Both of those numbers are 1 mpg better than the Palisade. It might not sound like much, but those fuel savings add up over time, especially when gas prices are high. 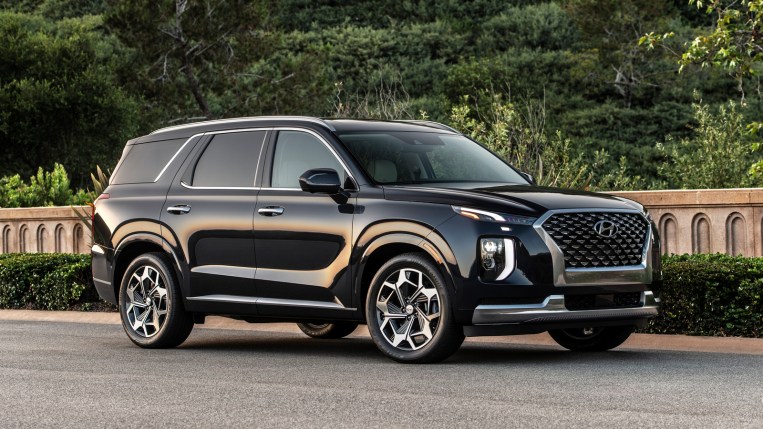 With its impressive blend of a roomy, upscale interior, modern technology, and value pricing, the Hyundai Palisade instantly became a class leader in midsize 3-row SUVs when it came out in 2020. It may not have the decades-old reputation of more established rivals like the Honda Pilot, but it’s an SUV worth test driving for just about anyone in the market for a family SUV. View listings near you

Value pricing: The Hyundai Palisade has a lower starting price than the Honda Pilot by a considerable margin. The Palisade starts at $33,600, and the Pilot starts at $38,080. Even the top Calligraphy trim of the Palisade begins at $47,290, compared to the Pilot Elite starting up at $50,370. If you’re on a budget, your wallet will prefer the Hyundai.

Modern tech features: The Palisade has a more impressive list of standard and optional tech features than the Pilot. For example, the Hyundai comes standard with rear occupant alert, safe exit assist, rear seat quiet mode, and many of the same safety tech features standard on the Pilot like blind-spot monitoring, automatic emergency braking, and adaptive cruise control. Base models of the Hyundai also boast wireless Apple CarPlay and Android Auto.

IIHS Top Safety Pick+: The Hyundai Palisade earns the coveted IIHS Top Safety Pick+ designation. This is the top award from the IIHS, and its demanding criteria look at a car’s crash test ratings, crash prevention, and headlights. The Pilot and the Palisade both get a 5-Star overall safety rating from the NHTSA.

You can’t go wrong with either of these SUVs. The Honda Pilot is an excellent choice if you’re looking for a practical, family-friendly SUV that’s good on gas for its size. Still, the Palisade has the advantages of more modern tech features, better IIHS safety score, a longer warranty, and more affordable pricing. See Honda Pilot models for sale or See Hyundai Palisade models for sale