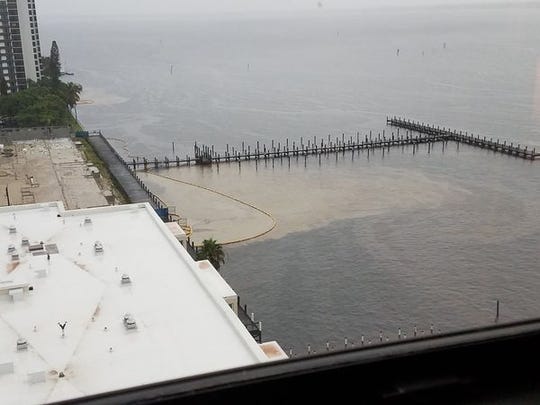 Runoff from construction in downtown Fort Myers Monday flows in to the Caloosahctehee River past barriers designed to contain it for the third time in recent months. (Photo: Calusa Waterkeeper/Special to The News-Press)

Water pollution from two downtown Fort Myers construction sites has halted work for the third time in as many months.

A heavy rainstorm Monday sent sheets of silty water into the river, past the floating yellow curtains installed to contain it. Both developments are near West First Street, bounded by Altamont and Virginia avenues, and both have been subsidized with city tax incentives: $12.96 million for Silver Hills and $ $5.5 million for City Walk.

“The City Walk and Silver Hills projects were issued stop-work orders (Tuesday) morning by the City of Fort Myers,” city spokeswoman Stephanie Schaffer wrote in an email. “The stop-work orders will continue until BMPs (best management practices) are improved at the construction sites.”

In case you missed it: Right past the barriers: Dirty water again surged into the Caloosahatchee from two downtown Fort Myers construction sites 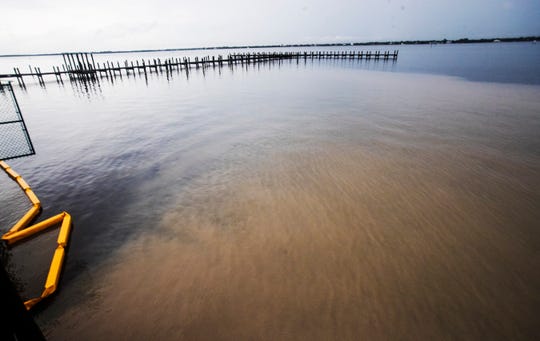 Cloudy runoff from recent rains flows into the Caloosahatchee River at the end of Virginia and Clifford Streets in downtown Fort Myers on Wednesday, June 4, 2020 . There are several construction sites nearby.  (Photo: Andrew West, The News-Press) 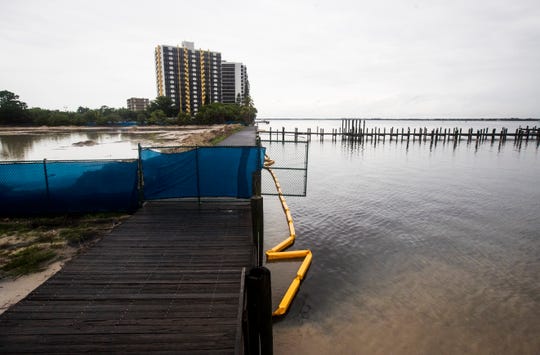 Cloudy runoff from recent rains flows into the Caloosahatchee River at the end of Virginia and Altamont avenues in downtown Fort Myers on Wednesday, June 4, 2020 . There are several construction sites nearby. (Photo: Andrew West, The News-Press)

“DEP has an ongoing enforcement case to resolve previous water quality violations at these sites,” she said. “DEP takes the latest violations very seriously and will be addressing them through separate enforcement action.”

Last week, her department fined City Walk $56,948.00 for violating clean water rules in June; action against Silver Hills is pending. Both have been required to keep rainfall contained onsite, which City Walk developer Joe Bonora said his team has been working hard to do.

He called Tuesday’s stop-work order “kind of shocking to me … We’ve been in communication constantly with DEP following the first incident,” In fact, Bonora said he recently had an update call with the agency, “and I asked them how’s (our) performance, is there anything we could do to improve? And I was told, ‘No, everything was done. It worked.’ We were doing a good job. There was nothing else for us to do.”

More: Checking in with Conservation 20/20: What land is destined to become public?

Construction managers have been trying to stem the flow since the first overflow in June. Bonora said he’s been trying to schedule a meeting with city officials – “just to get everybody on the same page with the contractor, the civil engineer, because I just don’t know what else could be done … I’m not an engineer, so I can’t intelligently speak on the causes, but I don’t know how to rectify it when there’s been no additional direction given. We complied with what DEP told us to do and they told us everything has been working.”

Calusa Waterkeeper John Cassani said he was “pretty amazed that it could be happening again,” but given increasingly extreme rain events, this kind of thing is to be anticipated, he said. “We’re in that pattern now with climate change where we get more extreme rainfall, so this should be expected to some degree.”

Turbidity is the cloudiness that happens when dirt, sand or other solids wash into the river and become suspended in its water. It can cause a number of environmental problems, including decreasing recreational value and habitat quality for fish and other aquatic life. Particles also provide attachment places for other pollutants, according to the U.S. Geologic Survey, notably metals and bacteria. “For this reason, turbidity readings can be used as an indicator of potential pollution in a water body.”