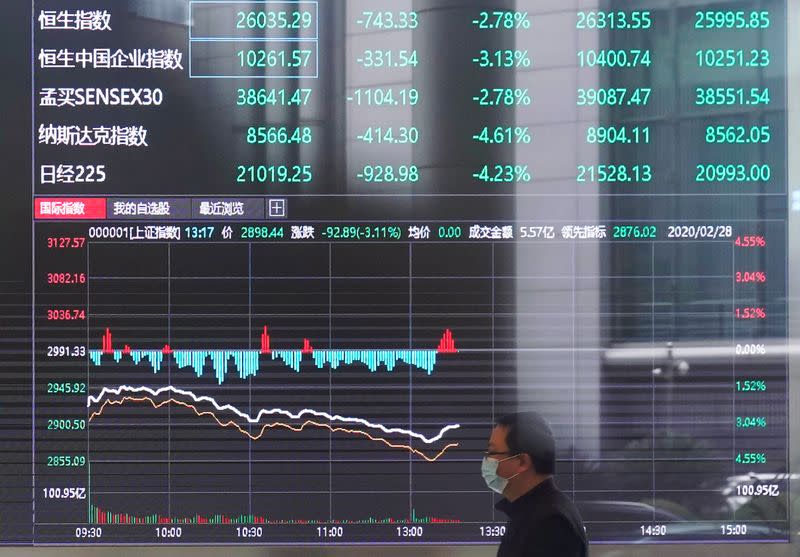 By Stanley White and Jessica DiNapoli

TOKYO/NEW YORK (Reuters) – Asian shares fell on Wednesday and oil prices hit lows not seen since June after a rout in technology shares sank Wall Street for a third consecutive day and a major drugmaker delayed testing of a coronavirus vaccine.

Sentiment for equities and other risky assets also took a hit after AstraZeneca Plc paused a late-stage trial of one of the leading COVID-19 vaccine candidates due to an unexplained illness in a study participant.

Treasury yields extended declines as investors sought the safety of holding government debt. Risk aversion also pushed the yen to a one-week high against the dollar.

A sell-off in high-flying U.S. technology shares, fueled partly by concerns about excess purchases of call options, has increased the risk of a larger correction across other markets.

“The performance of Wall Street is going to leave a heavy residue, and most noteworthy is how the tech names dropped down quite aggressively. Investors will take a close note of that,” said Tom Piotrowski, a markets analyst at Australian broker CommSec.

“The dramatic fall in oil prices in the last day is being seen as a proxy for global growth expectations. That 7.6% fall will certainly be resonating.”

Among U.S. technology names, electric-car maker Tesla plunged 21.06% on Tuesday, its biggest daily percentage drop, after it was excluded from a group of companies being added to the S&P 500.

SoftBank Group Corp shares fell 3.64% on Wednesday due to worries about the Japanese conglomerate’s trading in call options on U.S. tech stocks.

SoftBank has fallen around 12% since sources told Reuters and other media late last week that it built up stakes in major U.S. tech companies worth around $4 billion and bought a similar amount of call options for the underlying shares.

Counterparties who sold the call options to SoftBank would have to hedge their exposure by buying the underlying shares, which likely contributed to the Nasdaq and S&P 500 reaching record highs only days ago, some traders say.

Options are pricing in bigger market swings from Sept. 16 to Oct. 16, according to one investor.

The U.S. Federal Reserve’s next meeting ends on Sept. 16, which could have a big impact on stock markets because many analysts say excess liquidity created by the Fed has contributed to rising equity prices this year.

The British pound fell to six-week lows against both the dollar and the euro.

Escalating concerns over Britain leaving the European Union without a trade agreement are weighing on sterling.

The dollar index against a basket of six major currencies stood near a four-week high as Wall Street’s sell-off and renewed fears about Brexit boosted safe-harbour demand for the greenback.

Oil futures extended their sharp decline to the lowest levels since June due to concern about weak global energy demand and excess supply.