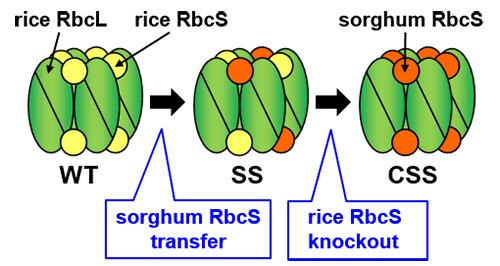 A research group consisting of Associate Professor Fukayama Hiroshi (Kobe University, Graduate School of Agricultural Science) and Professor Matsumura Hiroyoshi (Ritsumeikan University) et al. have succeeded in greatly increasing the catalytic activity of Rubisco, the enzyme which fixes carbon from CO2 in plant photosynthesis. The research team also hypothesized the mechanism which determines the catalytic activity of Rubisco, based on structural analysis of the proteins. In the future, it is hoped that increasing the photosynthetic ability of agricultural crops will lead to increased yields. These results were published in the international scientific journal Molecular Plant on August 31.

Growth speed in plants is mainly determined by photosynthetic ability. Thus improving photosynthesis in agricultural crops can increase their yield. In