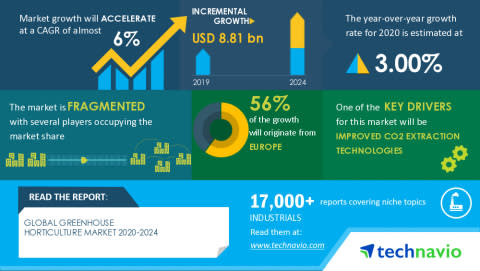 The greenhouse horticulture market size is poised to grow by USD 8.81 billion during 2020-2024, progressing at a CAGR of almost 6% throughout the forecast period, according to the latest report by Technavio. The report offers an up-to-date analysis regarding the current market scenario, latest trends and drivers, and the overall market environment. The report also provides the market impact and new opportunities created due to the COVID-19 pandemic. Download a Free Sample of REPORT with COVID-19 Crisis and Recovery Analysis.

Plants need CO2 to produce glucose during the process of photosynthesis. Greenhouses require additional CO2 to be given to the plants for increasing the yield, even with proper ventilation. CO2 can be extracted from the air using different techniques. Earlier techniques

How to Reduce CO2 Pollution on Construction Sites? Giatec’s SmartRock(TM) AI Assistant, Roxi(TM), and SDTC Have the Answer | News

OTTAWA, ON, Oct. 13, 2020 /PRNewswire/ — Giatec, world leader in concrete testing technologies, has announced that their artificial intelligence (AI) program, Roxi, has been trained with the help of Sustainable Development Technology Canada (SDTC) funding to reduce cement usage on construction jobsites during concrete testing.

Traditionally, concrete producers do not have thorough visibility into the rate at which their concrete hardens on jobsites or in specific ambient conditions. As a result, they often add more cement than needed to their mixes to ensure specified strength targets are met. Now, Roxi provides more insights regarding the amount of cement that is needed, including the amount that can be removed without compromising the concrete’s setting time or strength development. As a result, CO2 emissions resulting from the manufacturing of concrete will also decrease. This new feature will help decrease the cost of concrete mixtures and improve profitability for producers.

The wealthiest 1% of the world’s population were responsible for the emission of more than twice as much carbon dioxide as the poorer half of the world from 1990 to 2015, according to new research.

The report, compiled by Oxfam and the Stockholm Environment Institute, warned that rampant overconsumption and the rich world’s addiction to high-carbon transport are exhausting the world’s “carbon budget”.

Such a concentration of carbon emissions in the hands of the rich means that despite taking the world to the brink of climate catastrophe, through burning fossil fuels, we have still failed to improve the lives of billions, said Tim Gore, head of policy, advocacy and

(Bloomberg) — The Arctic has experienced the worst fire season on record for the second year in a row, with giant wildfires sending over one third more carbon dioxide into the atmosphere than last year.


Fires raging across the Arctic Circle emitted 244 million tons of carbon dioxide for the first six months of the year, compared to 181 million tons for the whole of 2019, according to Europe’s Copernicus Atmosphere Monitoring Service or CAMS.

“We’ve known for a long time that the rate of change of climate and temperature at northern latitudes has been two to three times faster than the global average,” said Mark Parrington, senior scientist at CAMS. “What we’re now seeing is a symptom of that more rapid rate of change.”