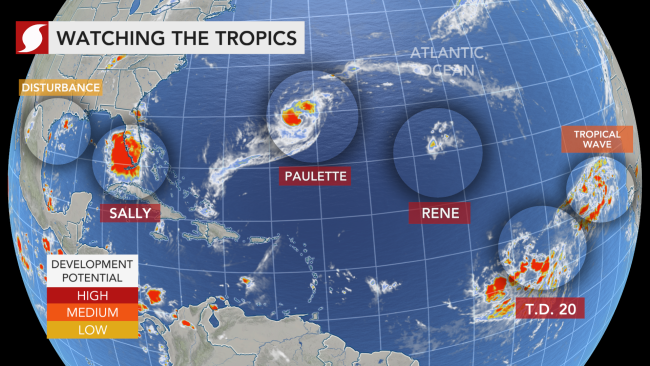 Will the tropical Atlantic keep churning out record-setting storms this week?

The Atlantic Ocean has spawned named storms at a blistering pace this year, with Paulette, Rene and Sally the most recent additions in what is on track to be a historic season. Forecasters say the last three names on the Atlantic hurricane season’s list for 2020 could soon be exhausted as additional disturbances are being monitored this week.

So far in the 2020 season, Cristobal and every storm from Edouard through Sally all became the earliest storm to develop in the basin for their respective letters.

As Paulette barrels toward Bermuda, Sally aims for the Gulf Coast and Rene harmlessly dissipates over the open Atlantic, forecasters are keeping close watch on several other areas in the basin for additional tropical activity.

“The current early season record holders for the