It’s been a rough couple of weeks for investors in the gold (GLD) sector as the metal has slid more than 10% off its new all-time highs. Unfortunately, this has transformed the relentless bids under gold juniors into a flood of sell orders, with many explorers falling 25% from their highs. Spanish Mountain Gold (OTCPK:SPAZF) has been one of the hardest-hit names to date, with a 40% correction in barely two months. While this decline has made the valuation more reasonable, it’s left some dents in the technical chart, with strong resistance stacked overhead. Based on the relative weakness vs. peers and an inferior project across many metrics, I continue to see better opportunities elsewhere in the sector. 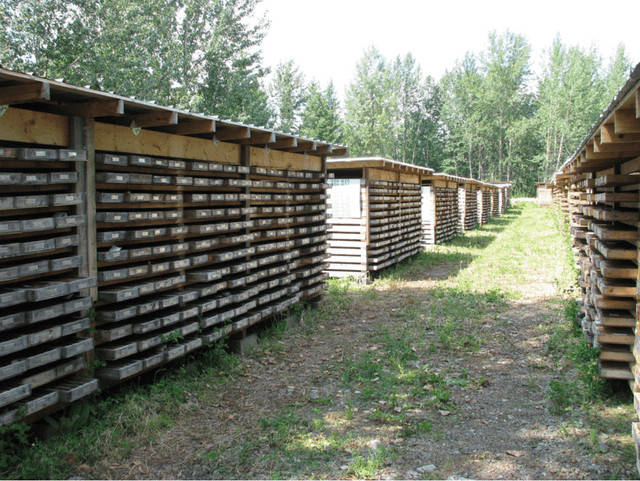 We’ve seen a sharp fall from grace for Spanish Mountain since August, and the severity of this drop shouldn’t be surprising. The ~ $100 million market cap company is a low-grade gold explorer that was propped up by heavy promotion in July and a steady stream of news slow that’s since dissipated. The highlight of this news dump was the declaration that the company was fully-funded to move the project to “shovel-ready” status, a mere 24 hours before the company suddenly decided it needed new capital in the form of a C$5 million financing with warrants attached. While the raise was done at reasonable prices (C$0.42), it led to further share dilution, with the share count now sitting at 313 million. 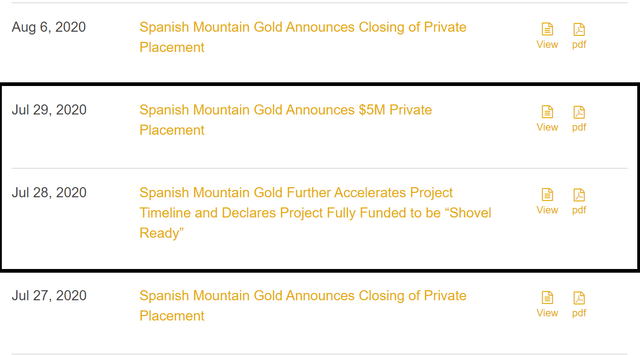 Many retail investors bought into the Spanish Mountain story in August on the anticipation of resource expansion drilling and highlight holes that might woo the market, but unless the expanded resource is coming in at much higher grades, this is not an overly attractive project. Not only does the project cost nearly twice what the average 100,000 ounces per year project costs to build, but it carries one of the lowest After-Tax NPV (5%) vs. Initial Capex [ATNIC] ratios among all other projects I track.

As the chart above shows, the ATNIC ratio stands at just 1.64 at $1,450/oz gold, a figure that’s 25% below the peer average of 2.19. This is based on initial capex of $273 million to build the project and an After-Tax NPV (5%) of $447 million at $1,450/oz gold. Meanwhile, despite Spanish Mountain having one of the smallest production profiles amongst its peers (104,000 ounces per annum), it has one of the highest upfront capital costs. If we look at the chart below, which compares average annual gold production to initial capex, Spanish Mountain ranks 3rd in terms of upfront capex, behind only Argonaut Gold (OTCPK:ARNGF) and Orca Gold (OTCPK:CANWF). However, both projects have much higher production than Spanish Mountain at 116,000 ounces per year and 167,000 ounces per year, respectively. Therefore, Spanish Mountain is inferior on a bang for buck standpoint [ATNIC ratio] and from a funding standpoint. Generally, I prefer lower-cost projects as they are easier to fund and require less share dilution/debt.

The inferior economics were less relevant while momentum was on the stock’s side, as stocks being driven higher by speculation can trade at unimaginable heights. Unfortunately, momentum has since flipped and is no longer a tailwind. As we can see from the chart below, the stock has slipped from $0.55 to $0.34 in just two months, and has come crashing down through its 50-day moving average. Often, loss of a key moving average isn’t a huge deal for a stock, but a dearth of buying support combined with a moving average break is not ideal. This is precisely what we’ve seen as the stock skid beneath its key moving average, but we saw no real buying demand for the stock. 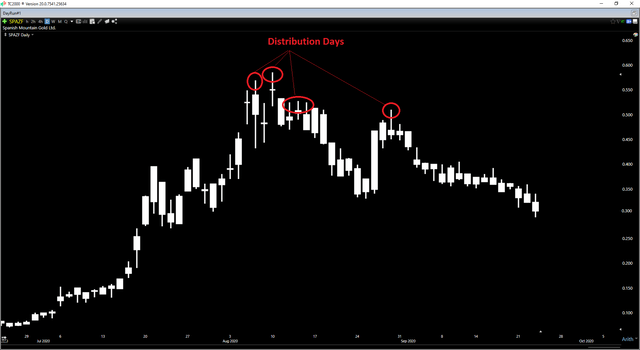 Given the sharp decline we’ve seen, we now have strong resistance overhead at $0.48, and this is likely to be the ceiling for the stock until year-end. We can see that there was significant selling pressure in this area on more than two occasions, while unsuspecting retail was buying into a trap. Given that any buyers in this area have now suffered through a 30% decline in just two months, I would expect them to be eager to get out at breakeven if provided the opportunity. Therefore, while a bounce is certainly possible after this waterfall decline, I would view any rallies back to $0.48 as selling opportunities. 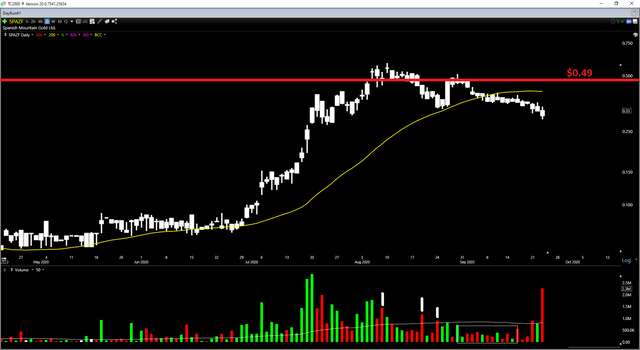 So, how’s the valuation look after the drop?

The one piece of good news is that this decline has at least improved the valuation for Spanish Mountain. Based on the company’s 313 million shares outstanding and a share price of US$0.31, the company’s current market cap is US$97 million. If we subtract out my estimate of US$9 million in cash, this leaves us with an enterprise value of $88 million. Based on the company’s 4.7 million-ounce resource, Spanish Mountain Gold is trading at just $18.72/oz and is trading at a P/NAV of 0.24x with a market cap of US$97 million, and an After-Tax NPV (5%) of US$407 million at $1,600/oz gold.

However, low-grade ounces aren’t always equal to high-grade ounces, so it’s important to note that Spanish Mountain should see a hefty discount for its ounces. In fact, we recently saw Artemis Gold (OTCPK:ARGTF) scoop up the Blackwater Project in British Columbia from New Gold (NGD) for just US$173 million for a 12.7 million ounce resource at 0.61 grams per tonne gold. This is a resource that’s more than twice the size of the Spanish Mountain Project in the same province, and Artemis paid only US$20.82/oz in cash. 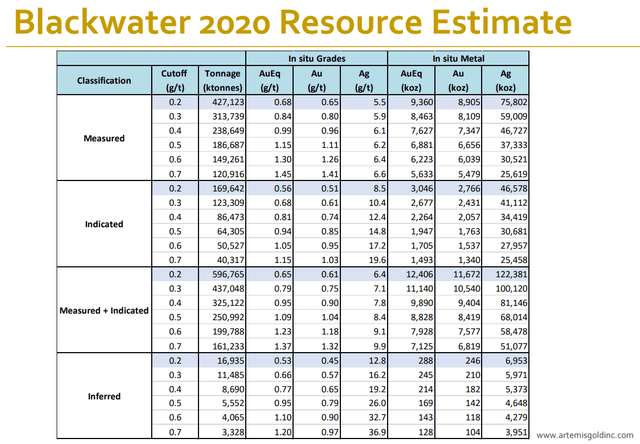 On a P/NAV basis, Artemis Gold paid less than 0.11x, paying US$173 million for a project with an After-Tax NPV (5%) of over $1.7 billion. Given that Spanish Mountain has much lower grades than Blackwater (0.46 grams per tonne gold vs. 0.60 grams per tonne gold), I would argue that Spanish Mountain should trade at the same levels as Blackwater or even at a discount. Spanish Mountain has noted that the capex is modest in press releases, but as charts in this article have shown, this is not the case. The average 100,000-ounce per year gold project requires an upfront capex of less than $160 million to build, and Spanish Mountain comes in at $273 million. Therefore, while Spanish Mountain’s valuation might look very cheap at US$18.72/oz, it’s important to note that low-grade projects with significant upfront capex often trade at hefty discounts to their peers. In summary, the valuation here isn’t terrible, but it isn’t anything special.

Investors often confuse strong share-price performance with superior fundamentals, and I would argue that Spanish Mountain is a case of this phenomenon. While the stock put up an incredible 600% rally in just 28 trading days, the rise was largely unfounded, based on promotion on different stock boards and the assumption that the resource was too cheap below US$20/oz. Unfortunately, the momentum has now dissipated, and we have a mediocre, albeit improved valuation, but a weak technical picture with strong resistance lying overhead. There is certainly a possibility of a bounce here, after a more than 40% decline in two months, but I see much better opportunities for going bottom-fishing in the sector. Therefore, I would view any sharp rallies back to $0.48 as selling opportunities.

Disclosure: I am/we are long GLD. I wrote this article myself, and it expresses my own opinions. I am not receiving compensation for it (other than from Seeking Alpha). I have no business relationship with any company whose stock is mentioned in this article.

Additional disclosure: Disclaimer: Taylor Dart is not a Registered Investment Advisor or Financial Planner. This writing is for informational purposes only. It does not constitute an offer to sell, a solicitation to buy, or a recommendation regarding any securities transaction. The information contained in this writing should not be construed as financial or investment advice on any subject matter. Taylor Dart expressly disclaims all liability in respect to actions taken based on any or all of the information on this writing.