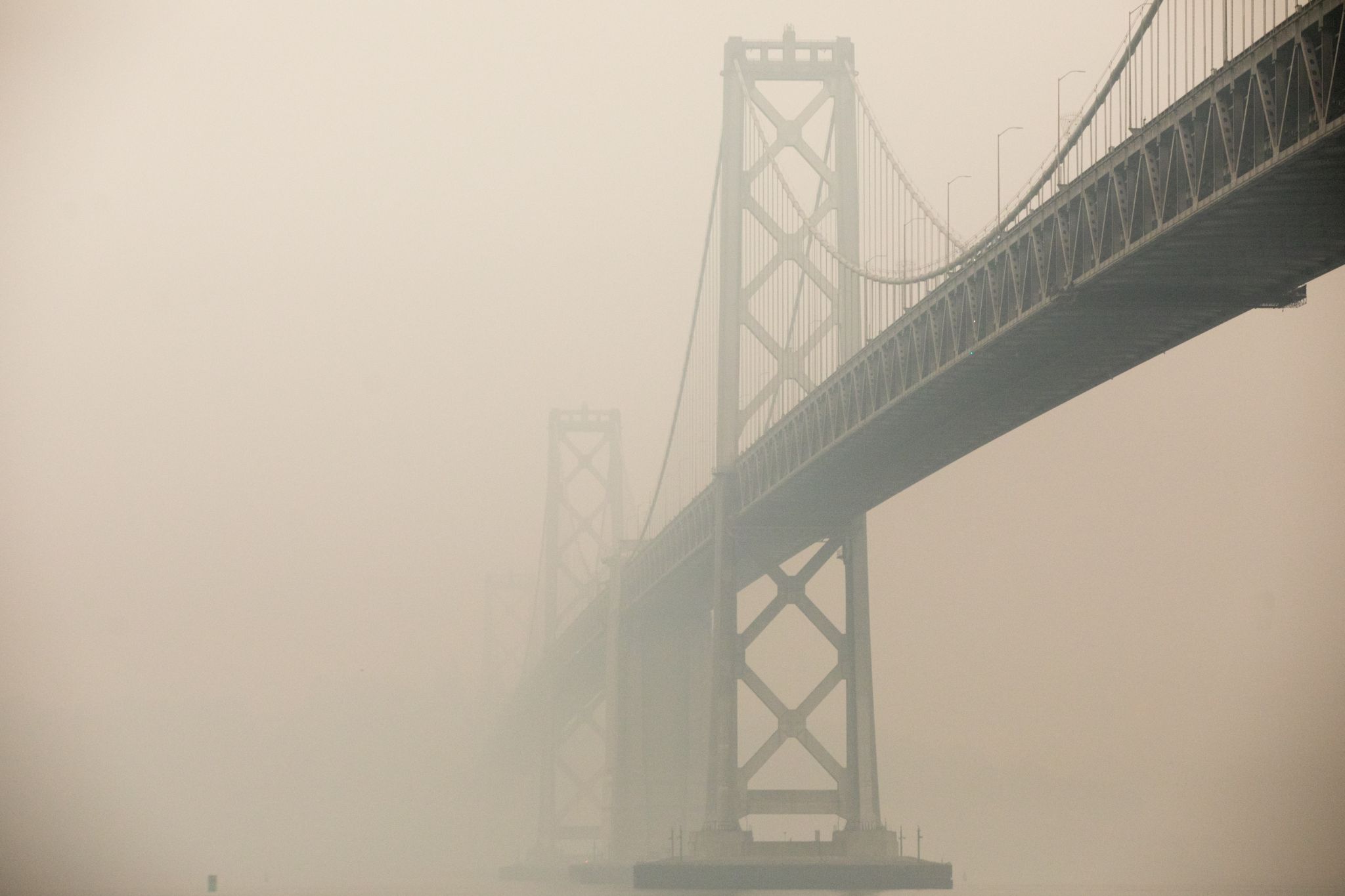 The Bay Area has been choking on wildfire smoke for weeks, but early Friday morning the sooty conditions worsened with air quality reaching severely unhealthy levels over large swaths of the region.

With minimal wind in the forecast, the National Weather Service said the heavy smoke concentrations are expected to persist through the day with little relief.

“As the smoke lingers here, our air quality is only going to get worse,” said NWS forecaster Brian Garcia. “I’ve worked in California for almost 11 years and it’s not about how bad it is. It’s about the duration of this. If you remember 2018, we had smoke from the Camp Fire. That air quality was horrible. It was worse than industrial cities in China. But that lasted only a day or two. Then we had wind come in from the east and blow it out. We have no wind right now.”

Northerly winds swept the heavy curtain of toxic air into the region on Wednesday, blocking the sun and giving the sky a strange orange hue. The winds weakened and the smoke settled to the ground. Garcia said the smoke will remain until a significant change in weather triggers winds to pick up and that’s not expected until Sunday night or early Monday.

“We’re talking five days of deteriorating air quality, lower than normal temperatures because of smoke cover, no sunlight, no appreciable winds trying to mix things out,” said Garcia. “For it to linger around like this for five days in coastal California, I’ve never seen it before.”

The concentration of pollution in the air is measured using the Air Quality Index that operates on a scale from 0 to 500. The higher the AQI value, the greater the level of air pollution and the greater the health concern. An AQI value of 50 or below represents good air quality, over 150 is unhealthy, over 200 is very unhealthy and over 300 signals hazardous conditions.

The widely used website PurpleAir measured AQI levels above 300 across the Bay Area and its global map showed that a large swath of the West Coast, stretching from Portland along California, had the most polluted air in the world. 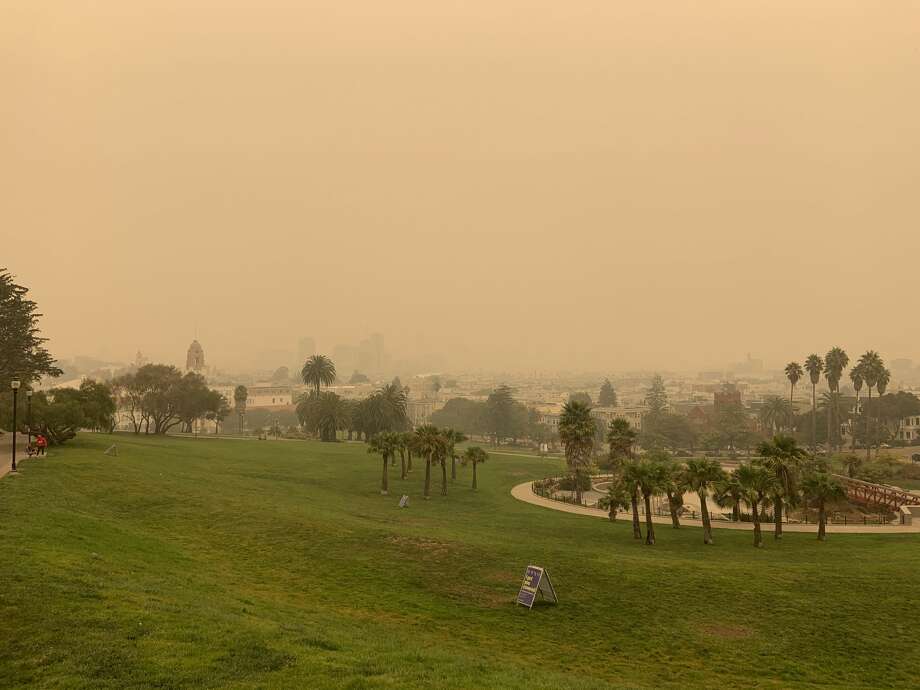 A smoke-filled sky over San Francisco’s Dolores Park on Sept. 10….

PurpleAir’s numbers are measured in real-time (averaged over the last 10 minutes). AirNow’s figures — which are based on Environmental Protection Agency standards — are calculated using a complex algorithm that “uses longer averages during periods of stable air quality and shorter averages when air quality is changing rapidly.” Results are updated hourly but delayed compared to PurpleAir.

PurpleAir sells its proprietary sensors to citizens and then uses the data from the monitors to track particulate pollution on a global scale. People can put them indoors or outdoors at their discretion.

The sensors use a laser particle counter to measure the number of airborne particles and then employ an algorithm to calculate a mass concentration based on the count. They differ from the sensors used by AirNow, which measure particulate matter by drawing air through a filter and then weighing the filter. 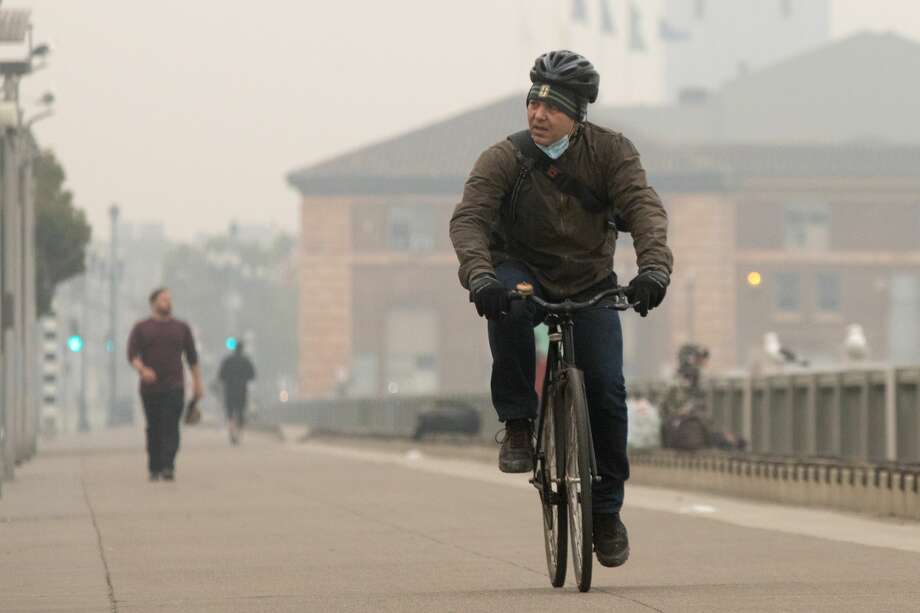 A bicyclist rides along the Embarcadero under smoky, grey skies on Sept. 10, 2020.

A bicyclist rides along the Embarcadero under smoky, grey skies on…

A terrifying, smoke-filled orange sky hung over the Bay Area Wednesday, yet the air quality across the region was generally fresh and didn’t smell of smoke.

On Thursday, the sky looked a lot less scary, but air quality levels deteriorated and on Friday they seem to have risen to a new cough-inducing, eye-stinging level.

Bay Area Air Quality Management District spokesperson Aaron Richardson explained an inversion — with temperatures at upper levels of the atmosphere higher than those on the ground — acted as a barrier on Wednesday, helping keep the smoke generated by multiple fires across the West aloft.

“Usually during the summer, the sun heats the ground, and the inversion breaks down and that fog layer dissipates,” explained Richardson. “Yesterday, there was so much blockage of the sunlight with a strong marine layer and smoke, the ground layer didn’t warm up as much as it usually does. We didn’t have that warming of the ground and that under layer that usually dissipates the temperatures inversion and allows the air to mix,” Richardson said.

Overnight, temperatures in the atmosphere cooled, breaking down the inversion, allowing smoke to settle to the ground.

The National Weather Service added that on Wednesday strong northerly winds in the upper atmosphere were moving smoke from the north to the south and keeping the toxic air mass aloft. Those winds weakened Thursday and “smoke has fallen down to surface as gravity outweighs turbulent mixing atop the boundary layer.”

With multiple wildfires burning throughout California and Oregon, it’s difficult to say exactly when conditions will improve, the NWS said.

The smoke has settled over the Bay Area and there’s minimal wind to push it out.

Often a sea breeze develops along the coast at this time of year, as the temperatures difference between the cooler coast and hot inland valleys kicks up onshore winds. But winds aren’t picking up as the thick ashy air blocking the sun is keeping temperatures across the region chilly, explained Garcia.

On Sunday night into Monday, a change in the weather is expected when a low-pressure system sweeps the Pacific Northwest and clips Northern California.

“That should be enough to move the smoke out of the area,” said Garcia.

The Air Quality District has a Spare the Air Alert in effect Friday, Sept. 11, which makes it illegal to burn wood or wood products. The district is encouraging people to stay indoors with windows closed. The district provides air quality updates on its website.

SFGATE reporter Mike Moffitt contributed to this story. Amy Graff is the news editor for SFGATE. Email her: agraff@sfgate.com.

Will wildfire evacuations accelerate the spread of coronavirus in the Bay Area?

10 things to do if a wildfire is approaching your house

How to keep your pets safe from wildfire smoke