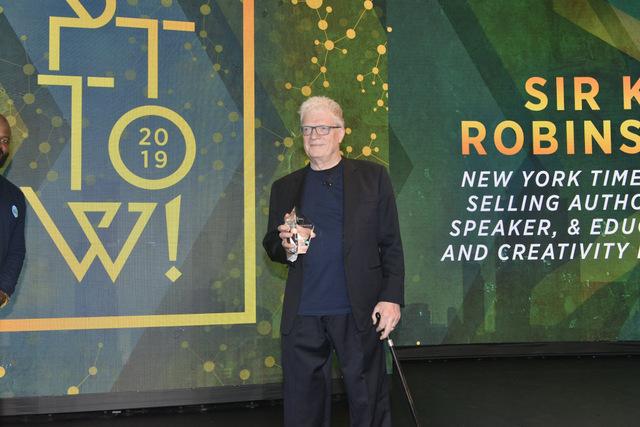 As a result of the pandemic shutdown PTTOW, an invite-only membership organization for C-Suite executives, which among its year-long activities curates and stages an annual summit event of speakers, panels, and breakout sessions, focused on business culture (how it’s evolving and how to effect change most strategically and successfully), was facing an existential crisis.

Roman Tsunder, who founded PTTOW some 12 years ago, spoke to me recently on Zoom along with Samantha Rabstein, PTTOW’s Vice President of Programming and Talent, to explain their successful pivot to virtual in the face of the crisis.

Their yearly summit was scheduled for April, and many of their members and long-time attendees were looking forward to the event.

“It’s a fascinating community to be part of,” said Helen Vaid, Global Chief Customer Officer at Pizza Hut, Yum! Brands, in a recent Zoom conversation. She explained that she first attended PTTOW three years ago at the suggestion of a colleague. “We were talking about getting involved in opportunities that are networks that are not just work-related, but where they teach you something bigger than work.”

For Vaid, the value of attending PTTOW was the ability to hear other executives in other industries talk candidly “about issues they are facing at work or the bigger problems facing their organization” and discuss how to tackle them. Vaid found great value in not being silo-ed in one industry and hearing how executives in media or other industries are facing the same challenges. “You get such a broad perspective that you don’t normally get to see,” Vaid said.

Most valuable, Vaid said, was the exposure to innovative thinkers and speakers. “Just to be in the same room and hear Ken Robinson speak [Sir Ken Robinson, a world-known education and creativity speaker and author, recently passed away] and ask questions. It’s such an uplifting, social, personal growth experience.”

Raja Rajamannar, Mastercard’s Chief Marketing & Communications Officer, President of Healthcare, says this exposure to people from different industries is one of the reasons he keeps coming back to PTTOW after attending for the last seven years. “It’s a really unusual forum,” he said. “You’ve got the media people, you have the marketers, you have the entertainment industry coming together.”

However, in light of the pandemic, Tsunder decided they would have to cancel this year’s event, which, Tsunder acknowledged, was potentially devastating for a live events company.

However, as Tsunder relates “Our whole world view changed after talking to our members.” In those conversations, he came to understand that the current situation was “new to everyone and no one had answers or best practices. “

Tsunder then had the realization that while “we can’t replicate the human experience of being together,” he said. “What we can replicate is the intentionality.”

One of the pillars of PTTOW’s credo is what Tsunder calls “heart-centered service,” a teaching that has grown out of PTTOW and Tsunder’s long association with the Dalai Lama. The Dalai Lama was the keynote speaker at PTTOW’s first event, and his commitment to participate spurred many others to attend. More recently, Tsunder travelled with two dozen PTTOW members to live on a monastery in India with the Dalai Lama. So when faced with this crisis, Tsunder explains, “our natural instinct is: How can we be of service?”

Realizing they could not replicate the full spectrum of offerings or experiences of a live event, Tsunder and Rabstein realized they could translate their “main stage experience,” the large keynote speeches or major panel discussions, to an online experience.

At the same time, they created channels for smaller groups to focus on those business and societal issues “that were keeping them up at night” as well as holding “future forums” — discussions of the future of an industry, for example with North Face or Mattel, or more recently on the gaming industry – along with channels for one-on-one connection, hangouts, and ways to break-away from business conversation to socialize with a conversation starter for the small groups.

Tsunder planned this change without knowing whether PTTOW’s members would accept them. To Tsunder the question was, “What happens when membership fees are now going to a different offering than they originally paid for?” And what they are getting is no longer a live event with the attendant opportunities for personal interaction, connection, and serendipitous networking that occurs in-person.

Most executive attendees responded well, according to Helen Vaid, because they were so hungry for community during these times. “I think Roman has done an amazing job of transferring the experience [of exposure to] these artists… It’s not like the physical experience but he’s taken this very broad [speaker] experiences and he’s done these different channels where you can talk with others about areas that are of interest to you.”

“During a time of Covid,” Tsunder said, “We all have to ask: How can we be our best selves? How can we thrive given the challenges?”

“We’re very purpose driven,” Rabstein said, explaining that in the midst of the pandemic, many corporations and many executives experienced a feeling of helplessness. “People want to feel productive and impactful,” Rabstein said, but doing so “can be really challenging. So our job is to help people tie ideas to action and help them mobilize.” Rabstein adds, “That’s really how we build what we do. Because if people are going to spend time with us, it has to be worth their time [so as] to have any impact on the world.”

One example is PTTOW’s Social Justice Taskforce which began six years ago in partnership with the Nelson Mandela family and foundation. “Instead of just being reactive we’re actually creating a theory of change on how our members can put that into action,” Rabstein said.

Baked into PTTOW’s core philosophy is that you need a broader perspective and to hear from various stakeholders in order to change the conversation and to actually implement change.

“The non-homogenity of thought is the way to drive business properly…and we want to help them to move that forward across the world.” Rabstein said.

Rajamarran feels that PTTOW is so collaborative because its members are  “not coming in with a competitive mindset.” In his view, “They come to PTTOW to find mentors or to mentor others…” Rajamarran likes that people leave PTTOW seeing “if something can be brought to action.” Educators, industry professionals, corporate leaders all collaborating to do social good. “It’s fantastic to see.”

“This is a once in a lifetime moment for us,” Tsunder said, “to fulfill our mission of being a year-round community.” Tsunder describe the changes PTTOW has had to make as “a complete shift” from being an events-driven business to one based on the needs and requirements of their member businesses, that is essentially year-round. By creating value in this difficult time, Tsunder said, PTTOW is thriving.

That is not the only change Tsunder had instituted to his business. PTTOW had launched a second event called WORLDZ that was open to the general public and was competitive with other business conferences. It was meant originally to be separate from PTTOW.

Now, Tsunder has decided to bring WORLDZ under the PTTOW banner and launch it as an invite only membership event and online platform called, ‘WORLDZ COLLECTIVE‘.  According to Tsunder, “It is the only invite-only community connecting and educating tomorrow’s leaders from culture shaping brands (Sr Manager-SVP level).” WORLDZ COLLECTIVE will be accepting applications starting October 15th.

Rajamannar said that PTTOW has been valuable to Mastercard in terms of business partnerships between entertainers and other members. He has sent executives to PTTOW and he is eager to send MasterCard executives to Worldz Collective to expand their ideas of what is possible.

I’ll leave the last word to Tsunder who summed up PTTOW and WORLDZ by saying: “Our mission is to help our members create the positive world of tomorrow. And so, how do we do that? It’s from intimate one on one connections with people and companies of influence.”