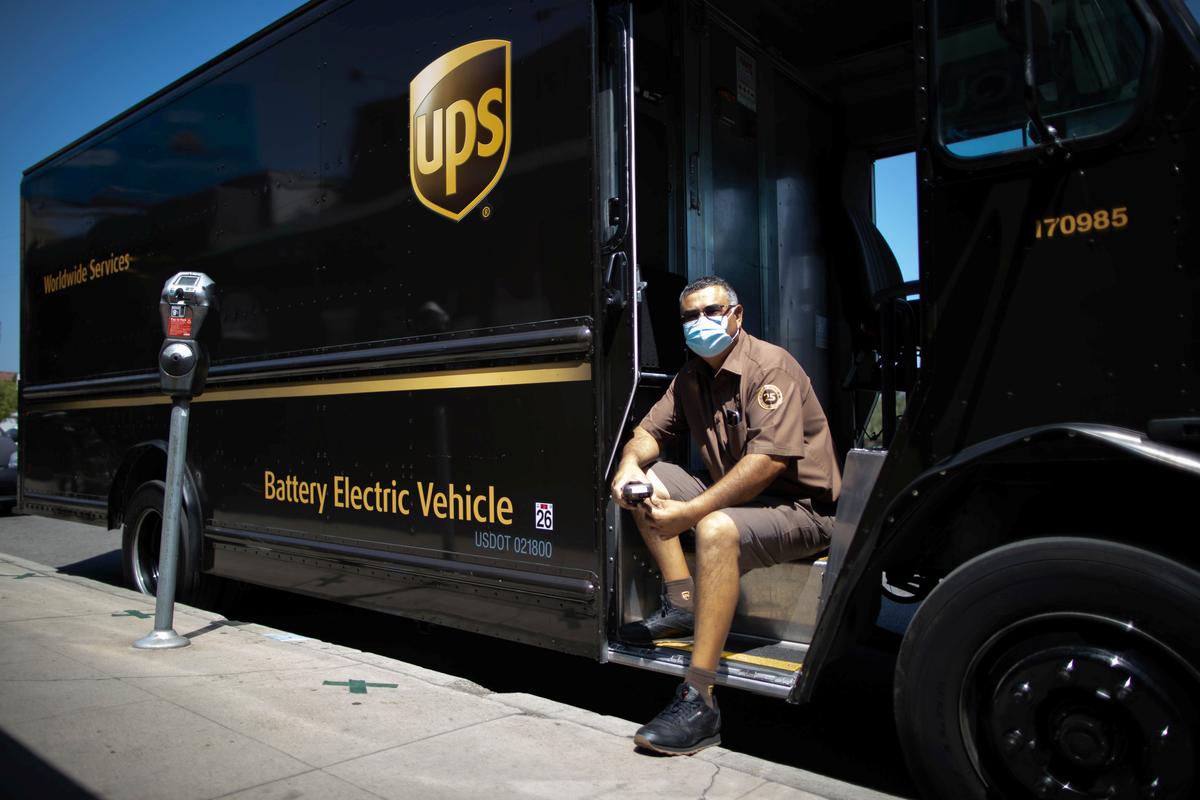 (Reuters) – Delivery fleet operators face regulatory pressure in California and other states to buy electric vehicles, but a surge in package deliveries thanks to coronavirus lockdowns has major firms itching to switch to electric right now.

And they want far more than just battery-powered versions of diesel- or gas-guzzling trucks and vans.

Fleet operators such as United Parcel Service Inc (UPS.N) hunger for computers on wheels that can harvest data and upgrade safety or autonomous features overnight to save money and boost profit.

“For us, it’s not just about making the wheels turn with a zero-emission vehicle,” said Scott Phillippi, UPS’s senior director of fleet maintenance and engineering, who envisions “Tesla-like” vehicles in the company’s vast fleet. “It’s about an integrated-technology vehicle – and that’s really what we’re pushing for.”

With its ability to send wireless upgrades and fixes to customers’ electric cars, Tesla Inc (TSLA.O) is seen as a bellwether for electrification. Major companies like UPS want to harness that power to bring cost-saving, autonomous or safety measures to their fleets in real time.

If, for instance, a manufacturer developed a feature to prevent a truck from bumping into a loading dock, UPS could have it in tens of thousands of vehicles overnight to prevent expensive dents, Phillippi said.

UPS, Amazon.com Inc (AMZN.O), and other e-commerce delivery companies are both creating and shaping the emerging market for electric vans and trucks. Economics and competitive advantages created by data will drive the market for electric commercial vehicles.

Demand for electric commercial vehicles is accelerating in part because battery range, long a concern for fleets, has improved dramatically, while battery costs have fallen.

UPS has ordered 10,000 vans from UK startup Arrival Ltd – the majority for the U.S. market – in which UPS also owns a minority stake. Arrival is working on self-driving technology, which is one reason why UPS is supporting the company, UPS’s Phillippi said.

The company has also reserved 125 of Tesla’s long-awaited Semi big rigs, 50 electric trucks from Workhorse Group Inc (WKHS.O) – with an option for 950 more – and is testing electric trucks with California startup Xos.

Tesla’s Semi was due to go into production in 2019, but is now slated for 2021. Tesla did not respond to requests for comment.

While demand is soaring, supply is still virtually non-existent and production has been beset by delays.

“Ultimately, there’s no trucks available yet,” Phillippi said. “We’re just waiting for vehicles to show up.”

The pressure is rising for manufacturers to deliver. Startups such as Rivian and Arrival are racing with larger, established vehicle makers including Daimler, Ford Motor Co (F.N) and General Motors Co (GM.N) to get electric trucks into production.

Startup Xos Trucks, for example, has begun low-volume production of vans with Mexican auto supplier Metalsa [MSDC.UL], a part-owner and strategic partner, using a “modular” battery approach where battery packs are added based on a customer’s range needs.

Xos Trucks Chief Executive Dakota Semler recounts the recent reaction of a customer when told their vehicles would be delivered in 2021.

“They said, ‘What do I have to do get it by the end of this year?’” Semler said.

The years-long journey of one electric delivery vehicle startup, California-based Chanje Energy Inc, shows the challenges vehicle makers and their customers face creating a new industry on the fly.

California’s decision in June to require commercial truck manufacturers to sell a rising number of zero-emission vehicles, starting in 2024, drew attention to the market.

But Bryan Hansel, Chanje’s CEO, said California’s mandate made little difference. The surge in e-commerce delivery caused by the coronavirus pandemic had already caused fleet operators to zero in on the 50 miles per gallon (80 km per gallon) equivalent his vans offer versus the 6 to 8 mpg averaged by conventional diesel trucks.

That boosted the range of Chanje’s vehicles to 150 miles from 100 miles. Its 2021 model should have a range of 200 miles, Hansel said, making it capable of handling 90% of U.S. last-mile delivery routes – the “last-mile” of e-commerce where drivers drop off packages at individual consumers’ doors is typically the most expensive.

Chanje had to tackle other problems.

Like other fleet operators, FedEx is not a fueling company – conventional fleets send vehicles to gas stations to fill up – so it lacked chargers for a large fleet. So Chanje became an energy services company, building out overhead charging stations at 20 FedEx depots across California to charge all 1,000 vans it will deliver in the first half of 2021.

Chanje also has stepped up its software and electronics capability. After drivers reported the vehicles would roll backward if they took their foot off the accelerator on a hill, Chanje spent four weeks rewriting the code with a software fix. Then, according to Hansel, the company “just flashed it over the wire to every truck we’ve ever built.”

“But we are actively in the market raising capital because the capital markets seem to be very interested in the EV space right now,” Hansel said.