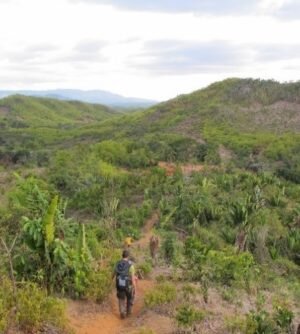 The research, published in Nature Communications investigated alternative sources of much sought after heavy rare earth metals used in every day modern technologies, focussing on subtropical soils in Northern Madagascar.

Modern technologies, such as those producing green energy from renewable resources like wind and water, require many tons of rare, so-called e-tech metals. Mining of e-tech metals can be costly, environmentally challenging and energy intensive. This is particularly true for metals sourced from rocks formed in ancient mountain belts or volcanoes, which must be excavated, crushed and then processed to separate valuable metals from the rest.

Sometimes nature lends a helping hand by breaking down naturally hard-to-crack minerals to form softer materials from which valuable commodities can be extracted more efficiently and sustainably.

The research, led by the School of Earth and Environmental Sciences at the University of St Andrews with colleagues at the University of Brighton, focussed on tracing a specific group of metals known as the rare earth elements. These include metals such as neodymium, praseodymium and dysprosium which are crucial components in technologies ranging from phones, computers, military or medical appliances to wind turbines and electric vehicles.

The demand for rare earth metals is set to grow exponentially over the next few decades, as ambitious clean energy projects, such as the European Union’s Green Deal, are being developed globally. However, most economies still find themselves relying heavily on imports from China.

At present, China produces roughly 77% of the world’s supply of rare earth elements. The rarest rare earths, particularly those used in permanent magnets, are primarily sourced from ion adsorption clay deposits, or laterites, formed by tropical weathering of rocks such as granite and syenite in Southern China.

Using an intense X-ray source, called a “synchrotron,” the team of researchers reveal at the atomic scale where the rare earths are in the soil. The team found that the rare earths are loosely stuck to the surfaces of clay particles. By comparing samples from a weathered volcanic complex in Madagascar to those mined in China, the study provides key insights into how nature produces easily-leachable, economically viable, rare earth deposits.

Lead author of the study Dr. Anouk Borst, from the University of St Andrews, said: “Some have wondered whether the Southern Chinese adsorption deposits are unique, but our study confirms that the Chinese soils are identical to deposits found in Madagascar, and that they formed in similar ways. The race is now on to find other deposits elsewhere in the world.” This information will be an impetus to global exploration for critical metal resources outside China.