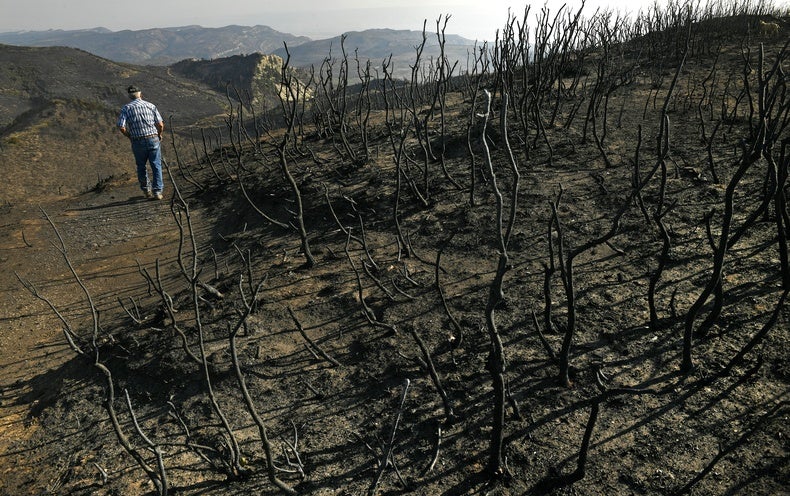 Two weeks ago, the Pine Gulch Fire became the largest wildfire in Colorado history when it grew to an area nearly the size of Chicago.

The 139,000-acre blaze, ignited July 31, was fueled by another record: The area where the fire occurred experienced its hottest August in at least 126 years.

Garfield and Mesa counties in western Colorado shattered temperature records that date to 1895, according to newly released NOAA figures that show a similar, daunting trend across the western United States.

In Mesa County, the average temperature last month was 74.1 degrees Fahrenheit. That’s more than 7 degrees above normal for August in the county of 155,000 people—and 2.6 degrees above Mesa’s previous record for August.

“This was probably the most extreme single summer month that we’ve ever seen in western Colorado,” said Russ Schumacher, Colorado’s state climatologist, noting that wildfires were also fueled by extreme dry conditions. “In some places, like Arizona and parts of California, it was the hottest summer on record.”

In Arizona and Utah, every county set a record for the highest average monthly temperature in August, NOAA records show. The average August temperature in each of Utah’s 29 counties was at least 5 degrees above normal.

In California, where wildfires have burned a record 3.1 million acres this year, 34 of the state’s 58 counties set a monthly temperature record for August.

Each of the six states also had its highest statewide average monthly temperature for August. California’s average temperature of 79 degrees last month was 5.3 degrees above normal in the state for August.

August heat will have “a carryover effect” in California, University of Colorado fire scientist Jennifer Balch said, making forests and grasslands drier than normal and primed for ignition when the state’s peak wildfire season begins next month with the arrival of strong winds.

“Because fire is so spontaneous, it takes just a little bit of warming to have a lot more burning,” Balch said.

California wildfires have already burned an area the size of Connecticut this year while destroying nearly 6,000 structures and killing 12 people, according to the California Department of Forestry and Fire Protection. The 3.1 million acres burned in California in 2020 is well ahead of the annual record of 2 million acres, set in 2018.

The three California counties that saw the biggest spike in August temperatures—Alameda, Contra Costa and San Joaquin—are at the heart of the 400,000-acre SCU Lightning Complex fires, which began Aug. 18 east of San Jose and as of yesterday were nearly contained.

Wildfires have been the main result of the record August temperatures. But the heat also intensified drought conditions in the West, threatening farmers, ranchers and ski resorts.

“Lots of farmers and agriculture communities are facing a season cut short or maybe a season that didn’t materialize at all,” said Jon Meyer, a researcher at the Utah Climate Center and member of a state committee that monitors drought conditions. “The state is really pinching water sources, trying to preserve as much water through the rest of the year.”

Schumacher said the August heat combined with dry conditions to sharply reduce reservoir levels and streamflow, which could lead to restrictions such as water rationing next year.

“If we don’t have a good snowpack year this winter, next summer is when the impacts are really going to come out in terms of water resources,” Schumacher said.

The record August temperatures across the West are part of longer-term national and global warming trends in the past five years.

But in many Western counties, August was insanely hot.

In 23 counties, the average temperature last month was at least 10% higher than normal for August.

The “coldest” county in the six states—Baca County, Colo.—had an average temperature that was just 1.5 degrees above normal.

Oregon and Washington, which have seen massive wildfires spread in recent days, had hotter-than-average temperatures in August but did not set records.

“These kind of years certainly would have happened in the past,” he said. “But with climate change, we’re loading the dice, creating a more favorable scenario for those type of years to occur more frequently.

“I’m not sure we can say climate change this year is doing this,” Meyer added. “But this could be the new normal we could expect at the back end of this century.”

Balch of the University of Colorado said the increasing temperatures, dry conditions and development in forested areas aren’t easily changed.

“I’m not expecting this trend to change anytime soon,” she said. “We’re not going to solve the fire problem that’s now a function of climate change by reducing our emissions. We’re kind of stuck with this situation.”

Reprinted from Climatewire with permission from E&E News. E&E provides daily coverage of essential energy and environmental news at www.eenews.net.