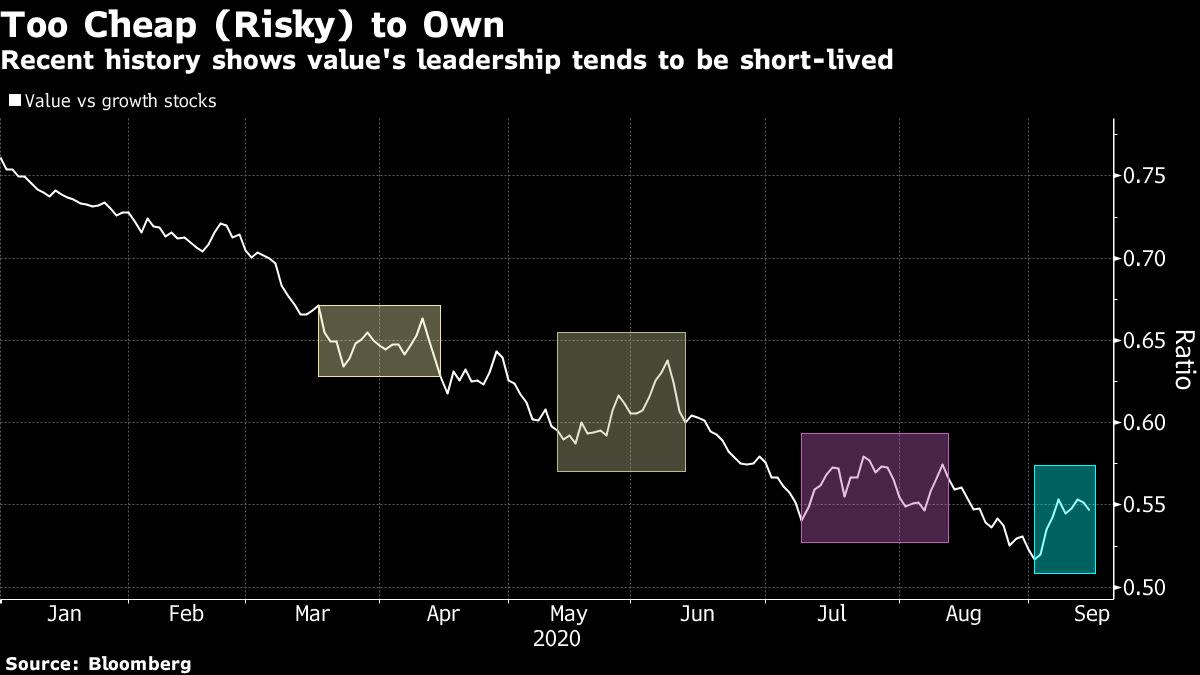 (Bloomberg) — In one of their few prescient moves of 2020, hedge funds backed off from the summer’s hottest trade and went bargain hunting, just in time for a revival in value stocks.

Over the last two months when a relentless rally in tech shares sparked fears over bubble valuations, professional managers who make both bullish and bearish equity bets retreated from the group while snapping up stocks trading cheap relative to earnings or book value, according to data compiled by Goldman Sachs Group Inc.’s prime-brokerage unit.

Those bets are looking timely as value shares fare better during a brutal month for tech. With value shares in the Russell 1000 Index rallying Wednesday to erase their loss for the month, the group has outperformed the growth counterpart by more than 5 percentage points in September, on course for the best month of relative returns since 2001.

It was a good decision in what has been a year of missteps for the professional money pools. Hedge funds were “indiscriminate” sellers during the February-March drawdown, dumping about $100 billion of stock during the stretch, or 4.4% of their assets under management, according to researchers at the University of Virginia and the University of Zurich. Then, as airlines, hotels and restaurants bounced back violently, they kept their exposure near multiyear lows, according to brokerage data.

The renewed interest in value stocks makes sense to Steve Chiavarone, portfolio manager and equity strategist with Federated Hermes. From an economic rebound to the potential of successful vaccines against Covid-19, the stage is set for value to shine after a decade of lousy returns pushed the group to the lowest level relative to growth on record, according to strategists from JPMorgan Chase & Co. and Bank of America Corp.

“We went overweight value in mid-August for the first time in a while,” said Chiavarone. “How do we think about that? I want to own parts of the market that are cyclical. If the consensus is right, third quarter will be the biggest quarter-over-quarter jump in GDP ever. And so I want companies that are going to benefit from improving growth.”

As the pandemic sends the economy into a recession, cheap stocks are getting cheaper because the majority of them, like banks and commodity producers, are viewed as vulnerable to economic downturns. But with earnings momentum picking up and the virus outbreak under control, investors should amp up their risk appetite, according to Marko Kolanovic, a strategist at JPMorgan.

Profit growth in the S&P 500 is expected to improve after troughing last quarter, analyst estimates compiled by Bloomberg Intelligence show. The value cohort is expected to report faster earnings expansions than growth starting in the second quarter of next year.

“Covid is declining in the U.S.,” Kolanovic said in an interview on Bloomberg Television with Vonnie Quinn. “As Covid eases, value will take leadership.”

To be sure, past instances of value’s revival aren’t giving investors much confidence. At least three other times this year have cheap stocks attempted to reverse their underperformance. Each proved fleeting.

For a lasting renaissance in value to hold, interest rates need to rise, according to Esty Dwek, head of global market strategy for Natixis Investment Managers. Higher yields are usually viewed as key for value because that benefits banks, an industry that dominates the style. However, Treasury yields hovered near record lows amid Federal Reserve monetary stimulus.

“It’s going to be tricky to get a proper rotation into value without rates moving higher and I don’t see why rates would move higher in the short term at all,” Dwek said. “It’s almost been the case of going down less than some of these growth stocks that were correcting a bit more. I’m not sure we are going to witness a serious rotation for now.”

Whether this rotation to value will persist is anyone’s guess. Investors surveyed by Bank of America Corp. have never been so unanimous in their conviction on the most popular asset class, with 80% of participants citing long U.S. tech. As a result, they’re rotating into value stocks with exposure in industrial companies rising to the highest level since January 2018.

BofA strategists including Riddhi Prasad tracked vaccine news and found the prospect of a COVID-19 vaccine success has shown a close relationship with value’s relative performance to growth. Despite a number of false starts, a potential rotation out of growth into value “appears to be in the cards again,” they wrote in a note.

Not only would such a shift help broaden participation, putting the market on a sturdy footing, it also signals confidence in the economy that will sustain further gains, according to Jerry Braakman, chief investment officer of First American Trust in Santa Ana, California.

“Is there really a leadership shift? People would probably like to see that leadership shift because that means, from an economic perspective and a Covid perspective, things have improved and that we’re not going to go back and have another run at closures,” said Braakman. “You know, that’s very hard to predict because we don’t know until we go through that.

For more articles like this, please visit us at bloomberg.com

Subscribe now to stay ahead with the most trusted business news source.