Polkadot, one of the fastest-growing governance cryptocurrencies, is working hard to overcome the resistance at $5.00. The fight for a breakout comes after a fall to support at $3.50. The massive breakdown occurred after DOT/USD traded a new high at $6.89 (at the beginning of September).

Before the breakdown, Polkadot rallied due to listings on a couple of the world’s largest exchanges; Coinbase and Binance. Just after the listing on Binance, on August 19, DOT hit highs of $5.75. A flash drop followed with the price testing $1.00. The token that promises to bring forth true interoperability and governance over the network then recovered to around $3.00.

Consequently, the last week of August resulted in massive gains where Polkadot rose above the former resistance at $5.75 and traded new highs at $6.89. Unfortunately, the price stalled, which left the critical $7.00 level untested. Earlier last week, DOT/USD embraced support at $5.50 before the entire cryptocurrency dropped in unison on Thursday and Friday.

DOT/USD tumbled, confirming support at $3.50. Interestingly the seventh-largest cryptocurrency commenced another recovery over the weekend. The rally was significant to the extent of rising above $4.00.

At the moment, Polkadot is trading at $4.51 after a shallow retreat from levels close to $5.00. Meanwhile, the price is trading below a bearish flag pattern, leading to more losses that could explore under $4.00. Similarly, the Relative Strength Index (RSI) falls towards the oversold and illustrates that the bearish grip keeps getting stronger.

Upwards, the resistance at $5.00 must be broken for DOT to get leeway for gains eyeing the key hurdle at $7.00. The 100 Simple Moving Average (SMA) in the hour range is in line to hinder growth at $5.23. As long as the resistance at $5.00 remains unbroken, the looming breakdown to the recently confirmed support at $3.50 will continue drawing closer. 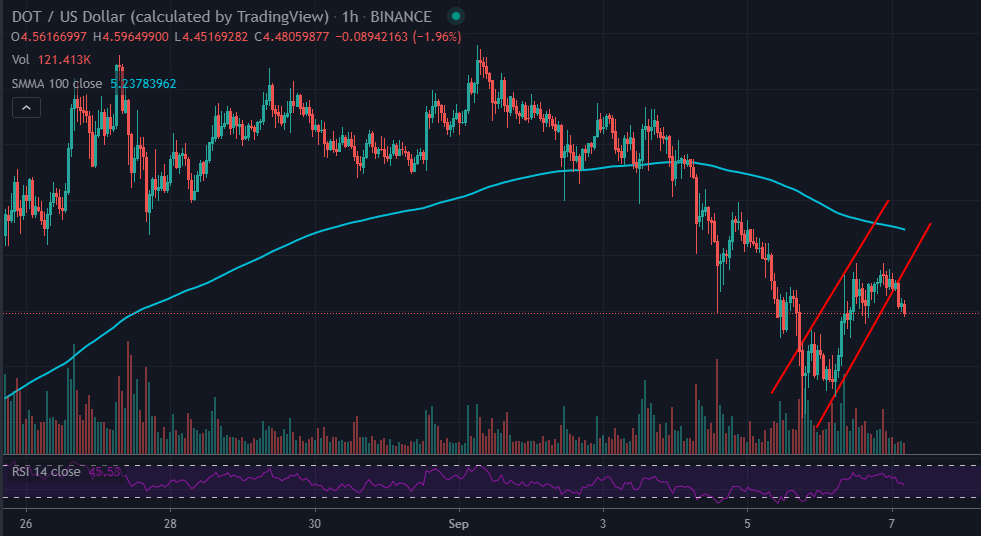