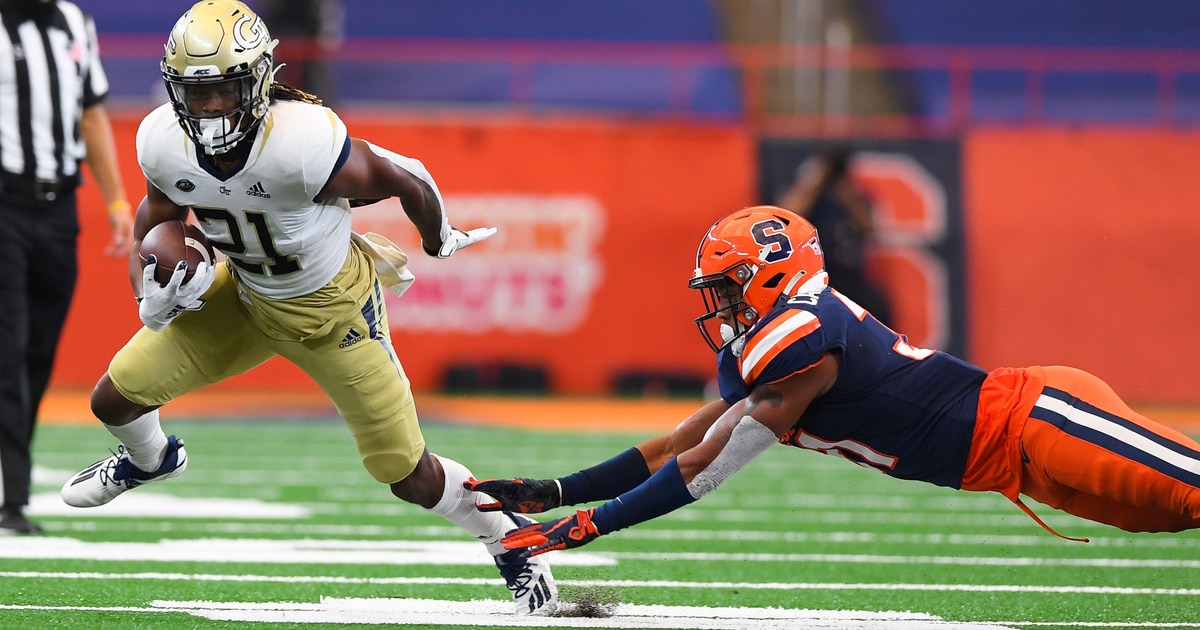 There were times when Tech did its job well. After the Jackets fell behind 30-20 late in the third quarter, the defense came up with consecutive three-and-outs to give the offense opportunities before quarterback Jeff Sims’ interception that was returned for a touchdown iced the game. But big plays, along with disadvantageous field position created by turnovers and ineffective kickoff coverage, expedited the defeat.

“I’d say, honestly, that’s not us,” said cornerback Zamari Walton, who had his first career interception and also had a deep-ball pass breakup in one of the aforementioned three-and-outs. “We could have played better. We had a downfall (Saturday), but I promise you, we’ll be back, and we’ll have it together.”

In his long-awaited but unexpected debut after being left off the “Above the Line” chart, defensive end Antonneous Clayton was effective in spurts pushing back the pocket and finished with two tackles. It was his first game since 2018 after transferring from Florida before the 2019 season.

The run game was productive enough to win the game. The Jackets finished with 275 yards on the ground, led by running back Jahmyr Gibbs’ 105 yards, Dontae Smith’s 75 and Jamious Griffin’s 54. Sims added 41.

From 2015 to 2019, FBS teams that ran for 250 or more yards won 85% of the time, according to sports-reference.com. In Tech’s case, frequently poor field position, penalties and the offense’s difficulty handling Syracuse’s blitzes negated the run game’s efficiency. At times, coach Geoff Collins said, the offense looked dynamic and high functioning.

“And then we turn around and hurt ourselves and have unforced errors,” he said. “And you cannot do that against a defense that’s as aggressive as they are.”

Often running behind lead blocks from guards Ryan Johnson and Jack DeFoor and tight end Jack Coco, the trio of Gibbs, Smith and Griffin ran with a combination of determination and speed, a credit to running backs coach Tashard Choice. Smith set a career high for rushing yardage (along with carries, eight) and ran through two arm tackles on a well-blocked second-quarter run for a 30-yard gain to set up Tech’s second touchdown. Griffin and Gibbs likewise had forceful runs that belied their stature. Whenever Jordan Mason returns from his foot injury, Collins and Choice will have an increasingly difficult decision about playing time.

Interpreting Sims’ smooth performance against Florida State as a baseline was perhaps premature. Saturday’s struggles — 13 of 28 for 174 yards with one touchdown and four interceptions — were a reminder that his development won’t be linear.

Against an unfamiliar defense that neither he nor the offensive line handled well, Sims had easily the poorest game of his three thus far. His first two interceptions were unusual, as the ball twice popped loose when he was hit in the pocket and fell into the hands of Syracuse defenders. He had similar bad breaks on two interceptions against Central Florida.

His third was thrown under heavy pressure after a blitz was not recognized. On the final interception that was returned for the game-breaking touchdown, the ball appeared to be tipped at the line of scrimmage.

After consistently protecting Sims against Florida State and UCF, Tech did not handle Syracuse’s blitz pressure, responsibility that falls on many shoulders.

Sims had redeeming moments, notably his fourth-and-8 touchdown pass to Gibbs, in which he scrambled away from blitz pressure and hit Gibbs on the run with a pinpoint pass, and also led the Jackets out of a second-and-33 canyon by again evading pressure and finding wide receiver Malachi Carter for a 29-yard gain.

“We’ve got to continue to stress (ball security) on every level, and, regardless if there’s some things that happened that were that were unique, we’ve still got to make sure we’re protecting the football at all times,” Collins said.

The superior play of punter Pressley Harvin must be noted. In the climate-controlled environment of the Carrier Dome, Harvin bombed seven punts for an average of 49.3 punts, only one of which was returned, for 13 yards. His best was a 64-yarder, all of it in the air, that landed inside the Syracuse 5-yard line and rolled out of bounds. With the aid of gunners such as Josh Blancato, the punt team netted 47.4 yards after netting 51.2 against UCF. Tech is now sixth nationally in net punting at 46.1 yards.

As for Tech’s other special-teams contributions, it was a bit more uneven. Kicker Gavin Stewart’s 26-yard field-goal try was blocked, the Jackets’ astounding fifth rejected placekick of the season. After finishing last in FBS in field-goal accuracy last season at 37.5%, Tech has started this 1-for-5. Collins also called for a fake point-after try after Tech’s first touchdown, having Harvin, in his role as holder, run for the pilon, but the play was not executed well and failed.

After that failed try, Austin Kent’s kickoff was returned out to the Tech 47, setting the stage for a touchdown that pushed Syracuse’s lead to 23-6 (when Tech’s D’Quan Douse got his own block of the PAT). Of Syracuse’s seven kickoffs, four were touchbacks and none of the Jackets’ three returns got past the 21.

5. Trying to understand the loss

Saturday’s loss would seem to need more time for deeper context, just as may have been the case with Tech’s win over Florida State (which was hammered by Miami on Saturday).

Last year, for example, the Temple loss was a bottom-scraping defeat that turned out to be a game that set the stage for James Graham to take over at quarterback and the team to make progress over the final eight games.

Doubtlessly, no one is waving pompoms after losing 37-20 to a team that had scored 16 points in its first two games, particularly when the Jackets summoned defeat with 15 penalties (plus three more that were not applied) and five turnovers.

The penalties (32 in three games) and ball-security problems (12 turnovers) could be rationalized as the products of a team that relies heavily on freshmen and sophomores, although Collins declined to use that as an excuse. For what it’s worth, Tech was one of the least penalized teams in FBS last year, although Collins’ two Temple teams were among the most penalized.

Tech should also get sidelined players back, such as tight ends Dylan Deveney and Dylan Leonard and possibly cornerback Tre Swilling. Tech plays next against Louisville Oct. 9 after its open date.