3 Tech Stocks That Could Split Soon

Apple (NASDAQ: AAPL) and Tesla (NASDAQ: TSLA) made a splash this summer when they announced their respective 4-for-1 and 5-for-1 stock splits. Both stocks ran up in price in August (and have reversed course so far in September) following the news, even though a subsequently lower share price from a stock split doesn’t change the stock’s fundamental value.

Granted, there are some good reasons a company might decide to split its stock, but at the end of the day a split occurs because a business (and thus its share price) is growing. Three other tech companies that have been growing fast and could follow Apple and Tesla’s lead are Intuitive Surgical (NASDAQ: ISRG), Alphabet (NASDAQ: GOOGL)(NASDAQ: GOOG), and Amazon (NASDAQ: AMZN). 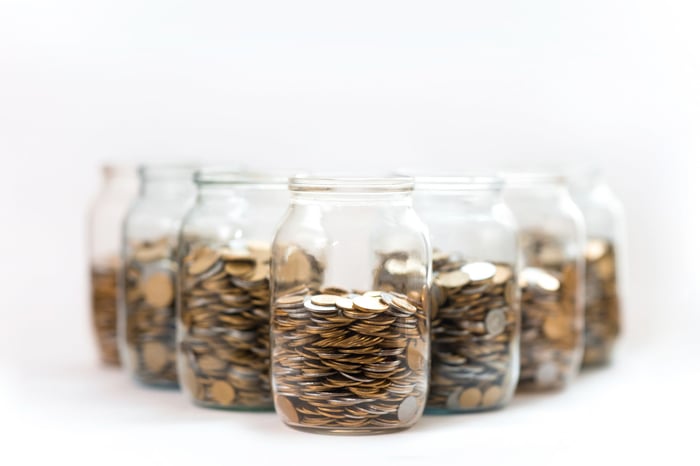 The leader in robotic-assisted surgery

Nicholas Rossolillo (Intuitive Surgical): Intuitive has a big head start in the robotic-assisted surgery industry. The company’s da Vinci surgical system received approval to be used in the U.S. 20 years ago, and the resulting two-decade run has turned the company into a leader in healthcare technology, valued at a market cap of over $84 billion.

2020 has been a tough year for Intuitive. With shelter-in-place orders going into effect around the globe, the number of procedures performed with da Vinci decreased 19% during the second quarter. Intuitive also announced it was releasing new extended-use instruments that can be used 12 to 18 times (versus the current 10-time use) that will lower instrument sales going forward but also lower costs for customers (and hopefully patients).

However, even in the midst of crisis, new da Vinci machines in use continue to rise around the globe. Intuitive reported its total da Vinci system installed base grew 9% from a year ago and reached 5,764 systems by the end of June. As a result, while fewer surgical procedures led revenue to tumble 22% to $852 million in Q2, the company is expected to return to growth mode quickly. And in the meantime, this is still a very profitable company, with adjusted net income totaling $132 million during the period.

Thanks to its leadership and strong growth, Intuitive Surgical shares are over $700 as of this writing, more than double the value from three years ago when the company did a 3-for-1 stock split (when Intuitive was close to $1,000 a share). With the company continuing to benefit from the slow and steady migration from traditional to robotic-assisted surgery, another split wouldn’t be out of the question.

Alphabet’s split is coming, but probably not soon

Anders Bylund (Alphabet): Google parent Alphabet has an unusual history when it comes to stock splits. The company has split its shares exactly once, issuing a 2-for-1 split in 2014 that created a new class of shares with no voting power. Google founders Sergey Brin and Larry Page held on to their special Class B shares, which carry approximately 56% of the company’s effective voting power. Issuing new stock in a non-voting class ensured that the founders didn’t lose their absolute power in shareholder votes.

The moves sparked a firestorm of controversy, including several lawsuits. In order to comply with a court order related to the settlement of these suits, Google issued $522 million worth of additional Class C shares (the non-voting kind) a year later, in the form of a dividend that issued 1.0027455 shares for every Class C share you owned. Fractional shares were handled by cash payments instead.

Alphabet’s share prices have nearly tripled since the 2014 split, so maybe it’s time to issue another batch of non-voting shares for every Class A or Class C stub in your portfolio. I don’t think that the company’s executives and board members are chasing a seat on the Dow Jones Industrial Average, the way Apple did over the summer, so this would simply be a shareholder-friendly change.

Brin and Page announced their plans to create the third class of shares through a stock split way back in 2012, citing requests for a split from “many of our investors.” See, they do pay attention to the needs of independent shareholders. It took two years to realize that plan. Alphabet already has the trio of stock classes set up now so the process might be faster this time, but this company doesn’t like to rush things. So I wouldn’t be surprised to see a preliminary announcement someday soon, followed by the actual split many moons later.

Billy Duberstein (Amazon): Given the recent surge of interest in both Apple and Tesla following their announced their stock splits, it’s not unthinkable that other large tech giants may be considering a similar move. Amazon is the highest-priced stock among the FAANG stocks, and has been for some time, so it’s possible the e-commerce and cloud leader may be considering a stock split today. At the current lofty price around $3,300, its price is certainly getting up there for individual retail investors to buy, unless they have an account that allows the purchase of fractional shares.

Many may not remember, but Amazon has actually split its stock before — though it was more than 20 years ago. At the height of the dot-com boom of the late 1990s, Amazon split its stock several times, including two separate 2-for-1 splits in 1998 and 1999, and then another 3-for-1 split in 1999.

At the time, Amazon’s share price was surging higher and higher as investors raced to jump on the internet boom bandwagon. However, that party ended badly, and the subsequent dot-com bust sent Amazon shares down 90% and its share price into the single digits. That can be a problem, as many investors look at single-digit-priced shares as a sign of trouble, or at least on the more speculative end of the spectrum. 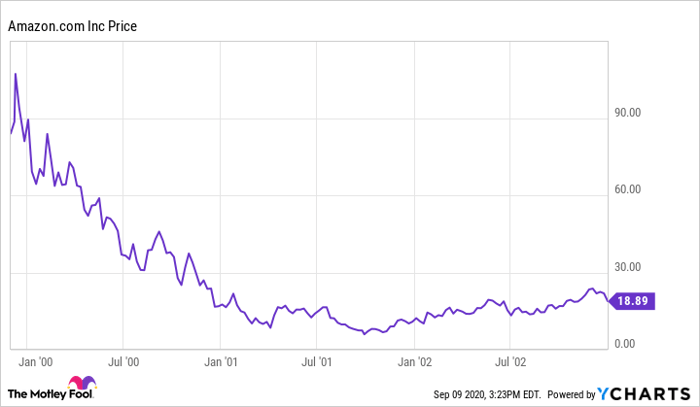 Amazon never split its stock again, and of course, its shares have gone on to make longtime investors fortunes.

Maybe CEO Jeff Bezos is superstitious, and attributes the company’s amazing run over the last few decades to not having split its stock since. Another possibility could be that Bezos may be taking a page out of Warren Buffett’s playbook at Berkshire Hathaway (NYSE: BRK.A) (NYSE: BRK.B), aiming to never split Amazon’s stock in order to attract long-term, buy-and-hold investors. After all, one of Amazon’s key competitive advantages is that it invests for the long term, with a much longer time horizon than most other companies. Likely, Bezos has sought to attract the type of long-term buy-and-hold investor that aligns with Amazon’s own company strategy. It’s certainly paid off thus far.

Nevertheless, even Berkshire Hathaway unveiled a second class of lower-priced B shares in 1996, albeit somewhat reluctantly. That was great news for smaller investors who wanted to invest in Berkshire at the time but couldn’t afford the $22,000 or so A shares were going for. Today, Berkshire A shares trade at a whopping $331,000 per share and B shares trade at a more affordable $220.

Amazon’s stock price hasn’t quite gotten so out of reach as Berkshire’s, but given Amazon’s incredible business growth since the dot-com bust, including the huge milestones of launching Amazon Prime in 2005 and the rise of Amazon Web Services, which took off in the 2010s, I’d say Amazon’s business is much more resilient today.

The recent price surges for Apple and Tesla around their stock splits may spur Bezos to change his thinking on stock splits. After all, he has been periodically selling off Amazon shares in recent years, not because he’s down on the business, but because Bezos has been personally funding his space exploration company, Blue Origin. As such, if Bezos thinks Amazon’s market valuation may get an incremental boost from a stock split and renewed retail investor interest, it’s not out of the question that Amazon may undergo a split sometime in the months or years ahead.

10 stocks we like better than Alphabet (A shares)
When investing geniuses David and Tom Gardner have a stock tip, it can pay to listen. After all, the newsletter they have run for over a decade, Motley Fool Stock Advisor, has tripled the market.*

David and Tom just revealed what they believe are the ten best stocks for investors to buy right now… and Alphabet (A shares) wasn’t one of them! That’s right — they think these 10 stocks are even better buys.